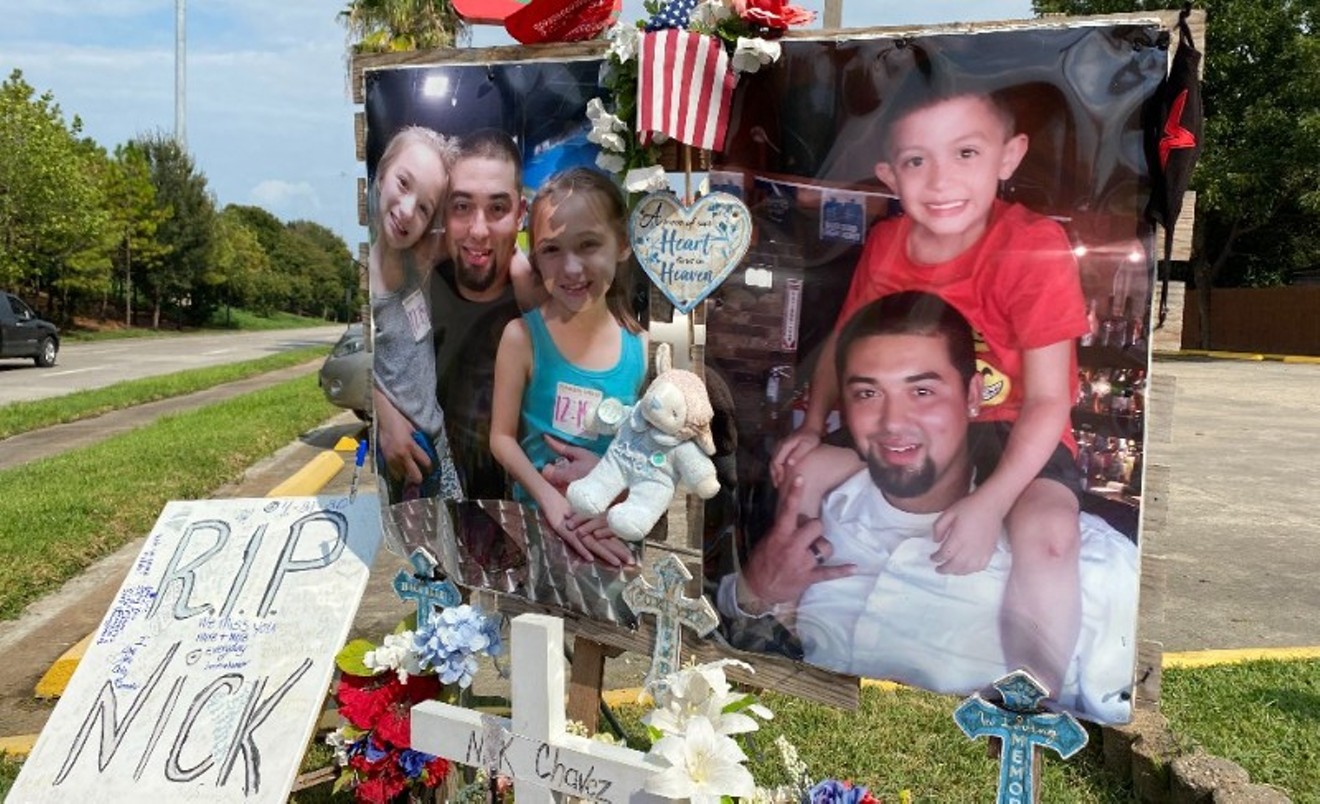 A memorial for Nicolas Chavez sits just off I-10 in north Houston, mere feet away from where he was killed by Houston Police Department officers in April. Photo by Schaefer Edwards

Nearly five months after Nicolas Chavez was killed by Houston Police Department officers on April 21, recent developments in the case have become a flash point for criminal justice and civil rights groups who say more reform is needed to prevent future tragedies and to hold local cops accountable.

Houston Police Chief Art Acevedo’s decision last week to fire the four Houston Police Department officers who killed Chavez — in a hail of 21 bullets after he was wounded and down on his knees — has earned measured praise from local police critics, but some are still critical of how the case has unfolded in the past several months.

“It’s the right thing to do to fire those officers who were clearly way out of line,” said Sarah Labowitz, policy director of the ACLU of Texas, “but the bigger issue is that they highlight systemic failures in policing in Houston.”

“For the community, it has really been a gut-wrenching time,” said Cesar Espinosa, executive director of FIEL Houston, a local immigrant-led civil rights group. Espinosa said he considers Acevedo’s firing of the four officers “a good first step,” but he believes that more needs to be done to make sure no other Houstonians meet Chavez’s fate at the hands of police.

First on Espinosa’s list is securing criminal charges from Harris County District Attorney Kim Ogg, who has said a grand jury hearing to determine whether the fired officers committed a crime will take place once the county’s Civil Rights Division has conducted an independent review of the case. “We hope that the grand jury looks at this and there’s an indictment toward the four officers,” Espinosa said. He also said justice won’t be served unless the four officers are forbidden from serving as police officers anywhere else in the country.

The fact that it took months for Acevedo to release the officer-worn body cam footage from Chavez’s killing is also unacceptable to both FIEL and the ACLU.

“Waiting 143 days, that does not inspire trust,” said Labowitz. The state ACLU has demanded that the Houston City Council vote on an ordinance that would prevent such long wait times before officer body cam footage is released, but it has not come up for a vote yet.

Based on what he’s heard from the community in recent days, Espinosa fears that HPD’s lengthy delay in sharing the body cam footage from the killing of Chavez, who was Mexican American, will have a lasting impact on how Hispanic Houstonians view local law enforcement.

“Those actions hurt the relationships that have been built for many, many years, and there’s a lot of people upset about it,” Espinosa said.

Chavez was reportedly suffering from mental health issues at the time of his death, and told officers he was “a MHMRA patient,” the old acronym for The Harris Center, the county mental health authority. Espinosa agrees with Labowitz that Chavez would have been better served by trained mental health professionals than by officers with guns drawn on that fateful April night.

“If there would have been more mental health experts or more resources or more tools that the police could have used, then we potentially could still have Mr. Chavez here,” Espinosa said.

“It’s not the first time we’ve heard this story,” said Renae Vania Tomczak, president and CEO of Mental Health America of Greater Houston, when the Press asked her about Chavez’s killing. The ACLU has called for increased use of non-police mental health professionals to respond to 911 calls concerning people undergoing a mental health crisis like Chavez, but to make that type of change possible, Tomczak said a lot more case workers will need to be hired.

For now, Tomzcak recommended that Houstonians make use of MHA of Greater Houston’s free online mental health screening resources to stay vigilant about possible mental health issues in themselves or in loved ones to help find those in need proper professional assistance before things spiral out of control.

She also said that anyone who calls 911 about a person who appears to be suffering from mental health issues should tell the operator that they are calling about a “mental health emergency,” and to request a first responder with “Crisis Intervention Training,” a nationwide training protocol that covers how to de-escalate dangerous situations with mentally unwell individuals who may pose a threat to themselves or others.

Since 2007, HPD has required all new officers to take a 40-hour basic CIT training course, and mandates that officers take an eight-hour refresher course each year. “About 3,700 of our 5,200 officers right now are CIT trained,” said Commander Bryan Bennett, the leader of HPD’s Mental Health Division.

Bennett said that 911 calls where an individual has been determined to have mental health issues and is a possible threat to harm themselves or others are flagged as needing CIT-trained officer support, but there aren’t always enough of those officers on-call to make that possible. “Last year, just about 70 percent of all CIT calls had a CIT officer as the primary officer,” Bennett told the Press.

It turns out that the four HPD officers fired for killing Chavez were hired after the department-required CIT training was implemented: Benjamin LeBlanc was an eight-year HPD veteran, Patrick Rubio was an HPD officer for two years, and both Omar Tapia and Luis Alvarado had been with the department for one year. But the lessons on de-escalating mental health crises those four men received clearly weren’t enough to save Chavez’s life.

Espinosa is also once again calling for the resignation of Houston Police Officers’ Union president Joe Gamaldi, who responded last week with a furious defense of the four HPD officers in question hours before the body cam footage from Chavez’s shooting was made public. Back in February of 2019, FIEL called for Gamaldi to step down after he threatened that HPOU would be “keeping track” of police reform advocates who criticized HPD after the fatal no-knock Harding Street raid, during which HPD officers killed Dennis Tuttle and Rhogena Nicholas. In that case, officers alleged that Tuttle and Nicholas were heroin dealers based on reportedly phony, police-manufactured evidence, but the only drugs found in the married couple's home were small amounts of cocaine and marijuana.

Espinosa said that Gamaldi’s insistence that the four fired officers “did everything in their power” not to shoot Chavez and his accusation that Acevedo “will not protect” officers “if they make a mistake” were clear signs that the union president is only concerned with defending HPD cops, regardless of any evidence of potential wrongdoing.

“I don’t care what union you’re from, you just cannot speak without really seeing the evidence that’s presented before you,” Espinosa said. “At the end of the day, we feel like he’s done Houston more harm than good.”
KEEP THE HOUSTON PRESS FREE... Since we started the Houston Press, it has been defined as the free, independent voice of Houston, and we'd like to keep it that way. With local media under siege, it's more important than ever for us to rally support behind funding our local journalism. You can help by participating in our "I Support" program, allowing us to keep offering readers access to our incisive coverage of local news, food and culture with no paywalls.
Make a one-time donation today for as little as $1.