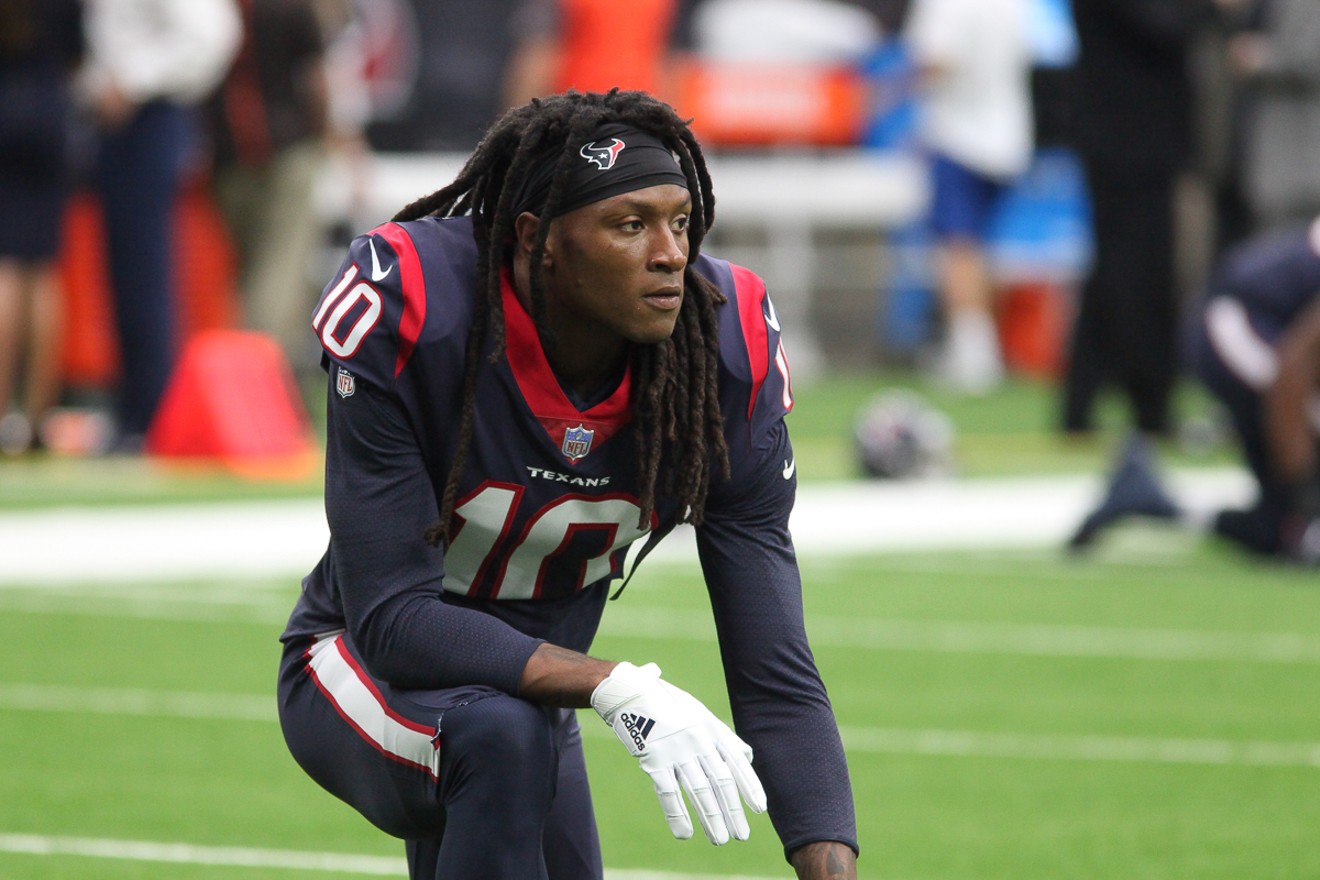 DeAndre Hopkins has been busy recruiting his future teammates on social media. Photo by Eric Sauseda
It was a rough week last week for soon-to-be-former New England Patriots cornerback Malcolm Butler. Three years ago at this time, he was being celebrated as the next in a long line of New England sports heroes after his goal line interception sealed Tom Brady's fourth Super Bowl win. Last Sunday night, Butler was forced to stand and watch the entire game, benched as the Patriots' suffered their third Super Bowl loss of the Brady/Belichick Era, this one by a score of 41-33 to the Philadelphia Eagles.

From literally the opening moments of the game presentation, Butler had tears streaming down his face. The camera shots during the anthem caught this, and by all accounts, Butler and his teammates had just learned moments before kickoff that he would indeed be benched in favor of Eric Rowe that evening, a coaching decision which reportedly created a widespread split in the Patriots' locker room just before the biggest game of the year.

The reasons for Butler's benching have been written off as performance-based by the New England coaching staff, but there have also been rumors of team rules violations causing the benching. Regardless, the relationship between Butler, who's been a solid and, at times, spectacular player for New England his four seasons there, and the team has been frosty for over a year now, ever since they couldn't reach a long term contract agreement last offseason.

So Butler is now a free agent, and already, he's been offered up a safe landing by someone that probably knows a little something about going against him — Texans wide receiver DeAndre Hopkins tweeted this the day after the Super Bowl last week:


Wusup @Mac_BZ we got a place for you in Houston

Hopkins didn't stop there. Putting some tremendous Photoshop skills to work (either his own or someone to whom he delegated), Hopkins gave Butler a nice feel for what the deep steel blue of the Texans would look like on him (via Instagram):

In fact, so caught up in playing general manager for the Texans (and playing amateur Photoshop Picasso), Hopkins decided to go shopping via picture on the offensive side of the ball as well, giving us all a gander at what Seattle Seahawks tight end Jimmy Graham would look like in a Texans uniform:

If Hopkins is angling to serve as some sort of special adviser to new Texans general manager Brian Gaine, I'm actually a fan of his first two recommendations. The Texans need another frontline cornerback desperately after mistakenly letting A.J. Bouye walk last offseason (and watching Kevin Johnson turn into Petey Faggins during the 2017 season), and Graham as a red zone weapon for Deshaun Watson is a pretty football-orgasmic thing to ponder, as well.

So let's not stop there, Hop! Let's get that Photoshop paint brush out and hit up these other 2018 free agents:

5. ANDREW NORWELL, G  (Carolina Panthers)
If you're going to upgrade a position, why not go all the way? Could there be a bigger upgrade than Xavier Su'a-Filo to the All-Pro Norwell? The good news is that if the Texans don't land Norwell, then Su'a-Filo to almost any other football-playing human being will still be considered, at the very least, a somewhat modest upgrade.

4. NATE SOLDER, T  (New England Patriots)
When you're doing a wing of your house, you don't just redo half the wing, and leave the other half there with some sort of outdated, mold-ridden fixtures and foundation. No, you redo the whole thing! So while DeAndre Hopkins is Photoshopping Norwell into a nice #68 jersey (see ya, Breno!), go ahead and insert Solder in Texans gear next to him as his new neighbor to the left.

3. LAMARCUS JOYNER, S (Los Angeles Rams)
If Butler is going to be the CB target (I'd prefer Trumaine Johnson, but this is Hop's show!), then let's try to pull a 2011 all over again. If you recall, that was the offseason when the Texans speed dated with cornerback Johnathan Joseph and safety Danieal Manning, signing both within a few hours of each other. The Texans rarely invest in the safety position, which is why I'd love to see Hopkins conjure up a nice Joyner JPEG.

2. DION LEWIS, RB  (New England Patriots)
The Texans need some juice in the offensive backfield, and Lewis would be nice cost effective way to get a receiving threat for Deshaun Watson and a runner with some wiggle who can hit big plays. With D'Onta Foreman's Achilles still a question mark, the Texans need something more than Alfred Blue as the next guy up after Lamar Miller. Truth be told, they need something more than Lamar Miller as the frontline guy. Get that Lewis paint brush out, D-Hop!

1. RYAN FITZPATRICK, QB (Tampa Bay Buccaneers)
Finally, the Texans will need to address backup quarterback. I've been of the school of thought that a mobile backup who can run some of what Watson does is a necessity. Some have disputed that stylistic requirement, but I think we can all agree that the Texans need to get better at backup QB. The first Texan go round with Fitzy in 2014 was a bit of a stomach turner, but obviously this time, he'd brought in solely as a backup, which I'm fine with. (I'd draft a rookie QB, as well.)