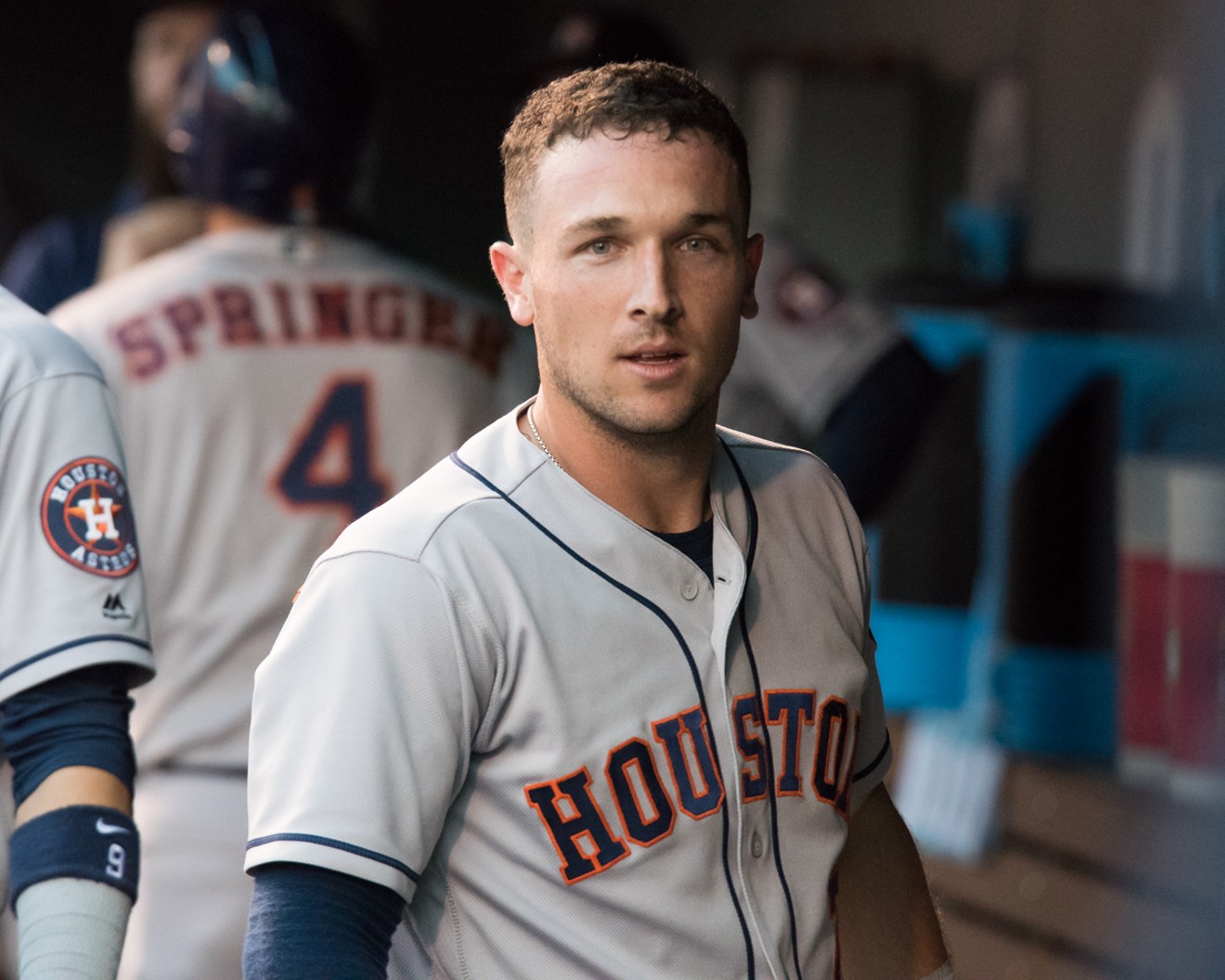 Alex Bregman will be an Astro through the 2024 season. Photo by Jack Gorman
About ten days ago, the Houston Astros renewed third baseman Alex Bregman's contract for the 2019 season. After a breakout year in 2018, where he finished among the leaders in the American League MVP balloting, Bregman was hoping for a small bump up in pay from his near league minimum salary. Well, he got just that, a small bump. REALLY small, as in, just $41,500 over what he was slated to make. This led Bregman to say the following, on the heels of management's decision:

“I feel like I outperformed that last year,” Bregman said. “I understand that it’s a business, but I feel like good business would be wanting to make a player who performed at a high level on your team happy and want to feel like he wanted to be kept and feel like they wanted him to play here forever. I’m just disappointed it doesn’t seem like the same amount of want.”


Well, it appeared that both sides kept talking, even after the minor acrimony from last week, because on Tuesday, it was first reported by FOX 26's Mark Berman that the Astros and Bregman had agreed to a six-year, $100 million contract that will buy out Bregman's arbitration seasons and his first two years of free agency, and make him an Astro through 2024.

MLB sources: The #Astros have reached an agreement on a six-year/$100 million contract with All-Star third baseman Alex Bregman that includes this season. Deal covers this year & the 3 years he'd be eligible for arbitration plus the first two years Alex can become a free agent.

On a team with big star power — Jose Altuve, Justin Verlander, Carlos Correa, George Springer, Gerrit Cole — Bregman has become the undoubted face of the team, both figuratively and literally (see: dugout home run poses). So let's dig into this new deal, which should have Astros fans very, very excited:

This is a good deal for both sides
In an a contractual environment where players of Bregman's caliber are getting ten year contracts for hundreds of millions of dollars when they hit free agency, the Astros managed to lock up another crucial franchise cornerstone through 2024 (Altuve is also locked up until then) on a reasonable deal, given the market for marquee players. If the 2018 version of Bregman is what he is going to be for the remainder of his 20's, $16 million per season is a bargain. From Bregman's standpoint, I would venture to say that, unlike some of the other "buy out arbitration year" deals the Astros have signed and offered others (most notably, Altuve and Springer), Bregman's $100 million over six years likely represents MORE than Bregman would have gotten for those six years playing at this level under arbitration and free agency, but for the Astros, keeping Bregman happy and having some budget certainty was worth the premium. Win-win for both sides.

Jim Crane passes another test
When Crane took over the ownership of the Astros seven years ago, the organization was stripped down to the studs, with a microscopic payroll, a rebuilding farm systems, and a ton of young players. The fair question amidst all of that was "When this team is good again, will Crane spend the necessary money to continue contending?" The answer has been a resounding "YES!" When the time has come to make big trades, Crane has approved them, most notably the sizable investment in Justin Verlander. When the time came to take care of Jose Altuve, he signed him to a $150 million extension. Now, he steps up and, with Jeff Luhnow's shrewd negotiation skills, does a smart deal for Bregman that secures two franchise cornerstones through 2024. So the next question...

George Springer, Carlos Correa, Justin Verlander, Gerrit Cole — who's next?
I think it's safe to say that, even with Crane's generous expansion of the payroll, the Astros are not going to re-sign all of their core players to big money deals. If I were rating the likelihood of each getting a multi-year, "HOLY $%@&!" kind of deal from the Astros when their current contracts are up, on a scale of 1 to 10, I'd go as follows:

SPRINGER: 2.5
He will be 31 when he hits free agency, and doesn't play a premium position.

CORREA: 5.5
Correa obviously needs to ramp his productivity back up to at least 2017 levels, but I get the feeling he may test free agency when the time comes. Just a hunch.

VERLANDER: 7.5
Verlander said recently he is open to a short-term deal to stay with the Astros. I'd prioritize him over everyone else, and see if he will do a three-year, $90 million deal with a player option after the second season.

COLE: 6.0
If it's got be JUST one of Verlander or Cole (both are free agents after this season), it'll be Verlander, if the Astros are prioritizing the near-term window. If they're prioritizing age and the long play, it'll be Cole.

Oh yeah, the Astros also extended Ryan Pressly!
As first reported by Chandler Rome of the Houston Chronicle, the Astros nailed down a key component of the back end of the bullpen by agreeing to a two year, $17.5 million extension with Pressly, who put up a 0.77 ERA with a 32/3 K/BB ratio in 23 1/3 regular-season innings after coming over from the Twins in a trade. He added another five innings, allowing one run in the postseason. The contract extension will kick in for the 2020 season. Pressly was another in a long line of success stories for the Astros' coaching staff and analytics department, as he attributes both to his improved performance after coming over from the Twins. One more full season at his 2018 Astro levels would have likely made Pressly a hot commodity on the free agent market in 2020, so this is a smart deal for both sides, as the Astros likely get above market performance in 2020 and 2021, and Pressly secures some life changing money. Like the Bregman deal, another win-win for both sides.