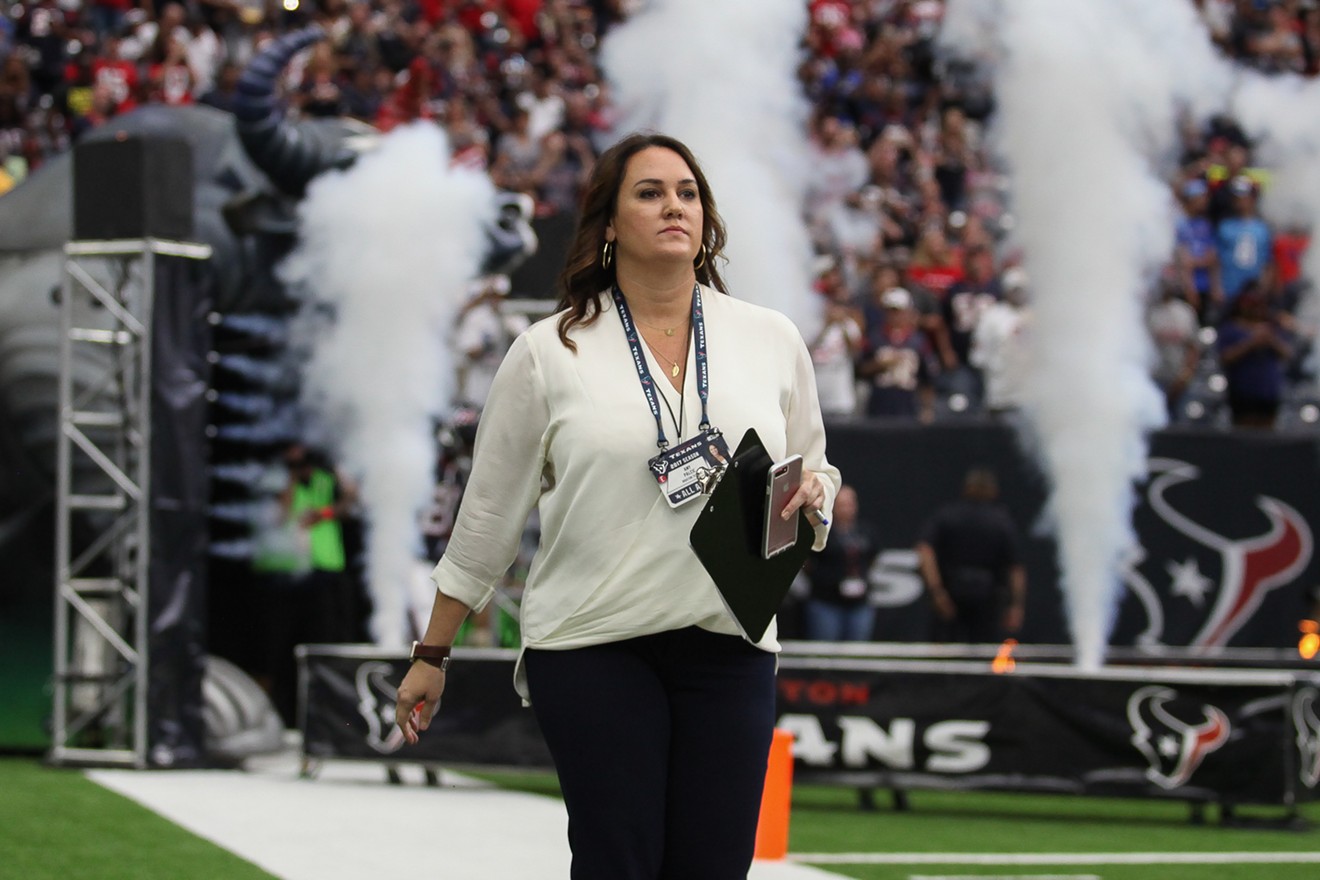 The Texans fired VP of Communications Amy Palcic on Wednesday morning, a move that shocked many around the league. Photo by Eric Sauseda
In a move that was stunning to those who work with her on a routine basis, Amy Palcic was fired on Wednesday from her role as Vice President of Communications for the Houston Texans. As first reported by Adam Schefter of ESPN.com, sources close to the situation said the organization told her she was no longer "a cultural fit":

Texans fired VP of Communications Amy Palcic, telling her she no longer was "a cultural fit", per sources. Palcic was the first and only woman to have full PR responsibilities for an NFL team. She was the winner of the 2017 Rozelle Award for best PR staff. She is widely respected


Regardless of the nebulous term "cultural fit" and what that may mean to the Houston Texans, Palcic was undeniably very good at her job. She was the first and only female VP of Communications in NFL history, and she continued the Texans' longstanding tradition of overseeing a media relations staff that was recognized as one of the best in the league. Their media relations staff, un 2017 under Palcic's leadership, won the Rozelle Award for the best media relations staff in the league. Palcic arrived in Houston in 2013, and was promoted to her VP role just a couple years later

If the outpouring of support for Palcic from various media members on social media is any indication, she will not remain unemployed long. Following Schefter's report, reporters from all corners of the NFL media universe widely panned the Texans' decision to let Palcic go, and expressed support for her:

This is a shocker. Amy, formerly with the #Browns , is amazing https://t.co/oZxnCzxGjX


She is fantastic at what she does too. https://t.co/aWgjggGyyh

Every time I've worked with Amy, she is prompt, professional and puts team first. Her group engineered one of the most viral moments of the season when Deshaun Watson's family surprised him virtually. Any other team would be fortunate to have her on a roster. https://t.co/meyWqe9DaT


The Texans have turned into one of the worst organizations in football since Bob McNair died. @amypalcic was the best. She certainly was too good for what the Texans deserve. https://t.co/WHByVtvl9j


This is a stunning move.
Stunning.@amypalcic is one of the best media-relations people I’ve met in my 36 years covering the NFL. Top 5. https://t.co/x6U3nA5nn5


Shocked. Palcic is the consummate professional & always a pleasure to deal with. She respects our jobs and what we need while never compromising the objectives of her team. The NFL is better with her in it..... https://t.co/ywB6H67BYP


Executive Vice President of Football Operations Jack Easterby arrived in Houston in 2019, and establishing the aforementioned "culture" has been one of his key initiatives since the day he arrived. Unfortunately, it has not contributed to winning football, as the Texans' record is 12-12 since Easterby arrived. Instead, it has resulted in a slew of about terminations of key employees.

Of course, in June of 2019, then-GM Brian Gaine was fired less than two years into the job, and eventually that role would get filled by Bill O'Brien, in disastrous fashion. Shortly after the playoff loss to Kansas City in January of this year, Senior VP of Football Administration Chris Olsen was fired. He was in charge of managing the team's salary cap, which has become an unmitigated disaster since then. One week later, the team fired J.J. Moses, the former Texans wide receiver who was hired as Director of Player Engagement, and was recognized by the league for creating the best player engagement program in the NFL.

Of course, added to the list of names on the body count would eventually be O'Brien himself, with whom Easterby closely worked to shape a roster and locker room that have yielded a 2-6 record to start the season. The Houston Chronicle reported that it was ultimately team president Jamey Rootes' decision to fire Palcic, but it's hard not to notice a bold trend of terminations, many involving folks recognized as being the BEST at their jobs, that began around the time Easterby arrived.