Fort Bend ISD's school board has given locals whiplash with its back and forth (and back again) decisions on mask rules Screenshot
One, two, three, four — Those aren’t just the first four numbers Houston ISD’s youngest students are taught. Throw them all together in a row and you end up with 1,234, the total cumulative number of COVID-19 cases as of Tuesday afternoon among HISD students and staff members since the school year began back on August 23. 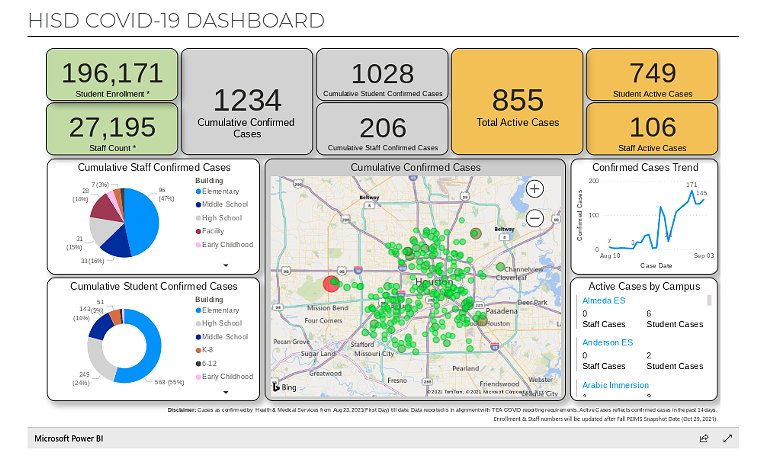 Houston ISD had reported 1,234 total COVID cases on its campuses this school year as of Tuesday afternoon.
Screenshot
Of those HISD cases, 855 are active and 749 of the district’s approximately 196,000 students are currently sick with COVID-19.

It might surprise some to learn that over 700 HISD students currently have the coronavirus even though the district and Superintendent Millard House II mandated the use of face masks on all of its campuses ahead of the 2021-22 school year.

But over in nearby Fort Bend ISD, the total number of students and staff who have caught COVID during the few weeks schools have been open dwarfs that of HISD, despite Fort Bend ISD having less than half as many students and thousands fewer staff members.

Since Fort Bend ISD classes began on August 11, the district has recorded 3,633 cases of COVID-19, 3,251 of them among its students. In terms of active cases, FBISD’s count of 716 is slightly lower than HISD’s active case total, with 627 FBISD students currently ill with the virus. So far, HISD hasn’t yet closed any of its campuses due to coronavirus, while FBISD has already chosen to temporarily shut down multiple campuses due to high case counts.

Fort Bend ISD's total COVID case count dwarfs HISD's this year, even with less than half as many students.
Screenshot
Even though FBISD's school year began several days before HISD's, this disparity in school closures and total cumulative case counts might have something to do with face masks. HISD mandated the use of face masks before its school year began, but FBISD’s school board has dithered on the issue. FBISD originally refused to issue a mask mandate, but reversed course and ordered masks to be worn on all district campuses as of August 26.

On August 28, FBISD decided to swerve once again. “In light of this legal development, at this time, the District is not requiring the wearing of masks,” read an announcement from the district posted online.

In light of this legal development, at this time, the District is not requiring the wearing of masks.

The District continues to strongly urge employees, students, parents, and visitors to wear a mask.

“Neither Governor Abbott nor Attorney General Paxton will be enforcing” Abbott’s mask order, an official from Paxton’s office wrote in a Dallas court filing last month according to the Texas Tribune.

Given that admission, it was even more surprising that FBISD decided to end its mask mandate so quickly, especially given the extreme unlikelihood that Fort Bend County’s Democratic District Attorney Brian Middleton would enforce Abbott’s order. Fort Bend County Judge KP George, himself a Democrat, has strongly advocated for masks and counts Middleton as an ally.

When Abbott was asked Tuesday about who would make the call on whether school districts can or can’t mandate masks, he clearly indicated he’d love for his Republican friends on the 100 percent GOP Texas Supreme Court to issue a permanent ruling on the matter.

After arguing that “every parent has the right to decide whether or not their child will or will not wear a mask” and that “a parent knows far better than an educator or some other government bureaucrat whether or not a mask is right for a child,” Abbott asked the state’s highest court to step up and lend him a hand.

“And that is exactly why it is appropriate for the Texas Supreme Court to decide this issue, so that we don’t have a patchwork decision making process across the state of Texas,” he continued.
KEEP THE HOUSTON PRESS FREE... Since we started the Houston Press, it has been defined as the free, independent voice of Houston, and we'd like to keep it that way. With local media under siege, it's more important than ever for us to rally support behind funding our local journalism. You can help by participating in our "I Support" program, allowing us to keep offering readers access to our incisive coverage of local news, food and culture with no paywalls.
Make a one-time donation today for as little as $1.