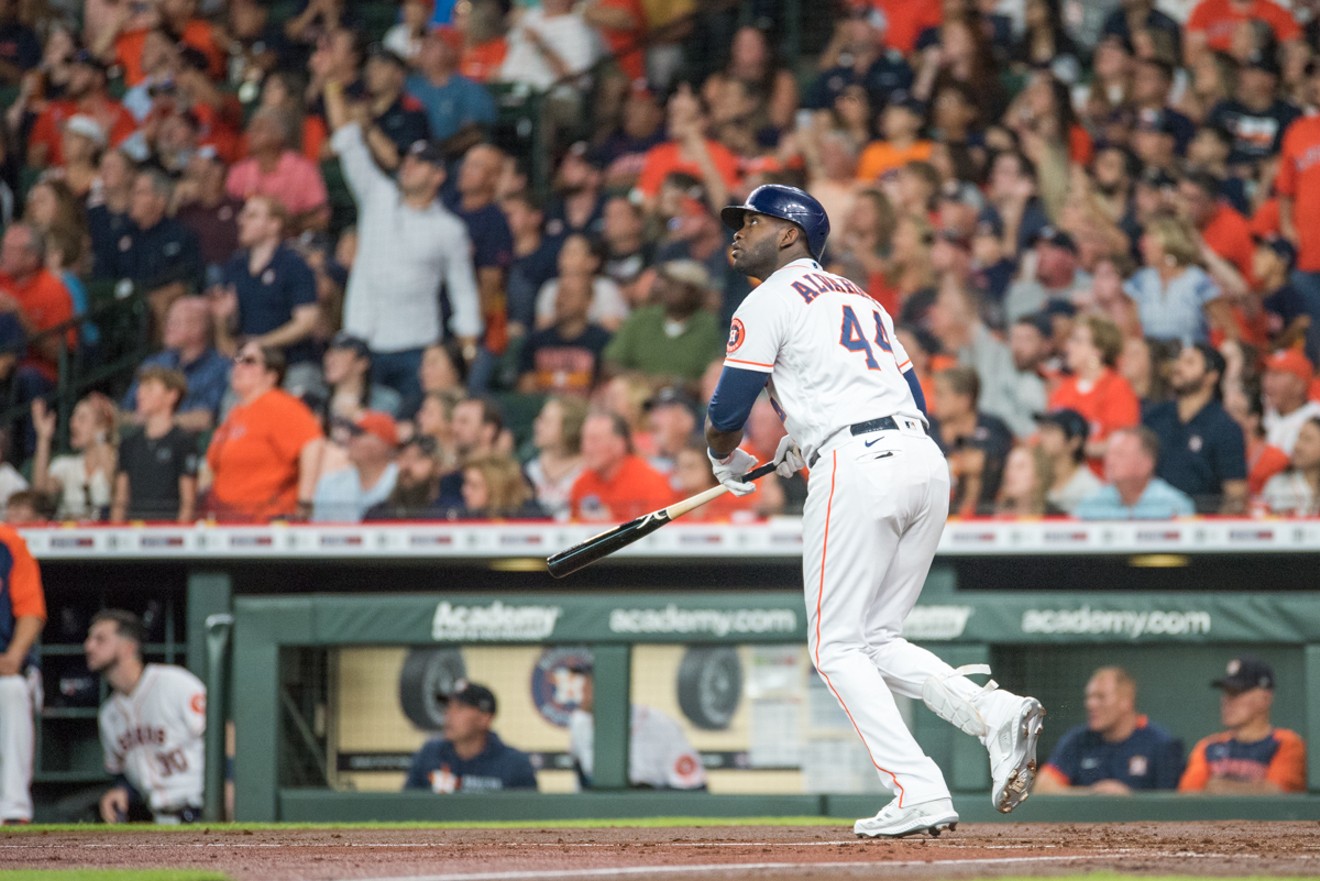 Yordan Alvarez launches another home run against the A's. Photo by Jack Gorman
If there were ever worries about the Astros in the AL West early this season, they seem to be fading. After a forgettable 2020 (in more ways than one), it was tempting to wonder if the Stros had the arms and the continued firepower to look like the team that went to the World Series two out of three years again.

That worry may have gotten worse after some early season injuries and some struggles, nevermind the annual "this is gonna be our year" wins from the Oakland A's.

But, the ship has more than been righted over the past month and the Astros are on a tear racing out to a four-and-a-half game lead over the A's and only two games back of the best record in baseball despite losing a day game to Oakland on Thursday 2-1.

Obviously, this team is an offensive machine (Thursday's anemic output notwithstanding). They lead in numerous offensive categories including run differential, runs scored and batting average. They also strike out less than any team in baseball. It's eerily similar to the 2017 team that won the Series.

In terms of total pitching, they are in the top 10 in ERA, fifth in quality starts and sixth in WHIP. That includes a bullpen that has been shaky at best, minus closer Ryan Pressly who continues to be lights out at the back of the bullpen.

In truth, the biggest issue — and it remains one for the moment — is relief pitching, which is why rumors have been circulating that either the Astros or the A's will wind up with Cubs ace reliever Craig Kimbrel. Adding someone like Kimbrel, who currently has a microscopic 0.57 ERA in 33 games, with 54 strikeouts in just under 32 innings and a WHIP of 0.66, would obviously be a HUGE get for this team. But, even if they don't make a blockbuster move like that, the addition of one or two quality arms for the bullpen is an absolute must for a team that is on pace for another long run in the playoffs.

What GM James Click decides to do will depend largely on what the market will bear. Don't expect the Astros to clear out what little remains of a once very dominant minor league system even if it means better arms in the postseason. But, it won't be a shock if the Stros do make at least a couple of moves to shore up their weakest link because they, perhaps better than most other teams, understand just how rare a run like they are experiencing is. This could be their fourth 100-win season in five years with a potential third appearance in the World Series.

They are absolutely that good.
KEEP THE HOUSTON PRESS FREE... Since we started the Houston Press, it has been defined as the free, independent voice of Houston, and we'd like to keep it that way. With local media under siege, it's more important than ever for us to rally support behind funding our local journalism. You can help by participating in our "I Support" program, allowing us to keep offering readers access to our incisive coverage of local news, food and culture with no paywalls.
Make a one-time donation today for as little as $1.