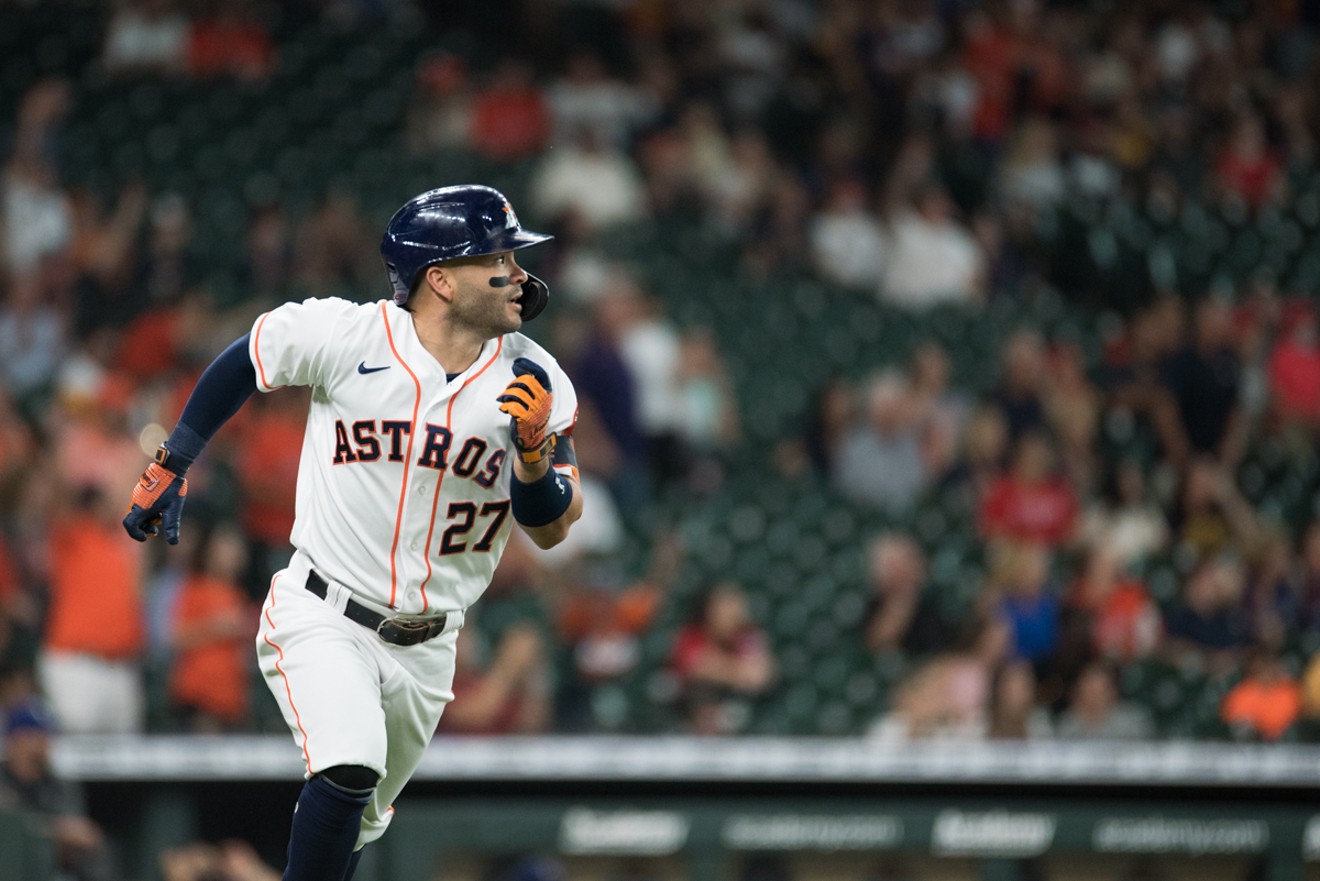 Jose Altuve didn't wear a buzzer, no matter what my Philly family says. Photo by Jack Gorman
Nearly every year, I travel with my wife to the South Jersey Shore to visit with her family. These are all incredibly intelligent and lovely people. We spend a week on the beach in much cooler weather and eat...a lot. I even wrote about my quest for great sandwiches there two years ago.

This year, the topic turned to sports, as it often does. They know I write and talk about sports and they are big fans as well. Being from Philadelphia, their most rabid fandom lies with the Sixers and the Phillies. Our group seems to like football and generally accept hockey, but baseball and basketball are the first loves.

With the Sixers in a heated playoff with Atlanta, that certainly dominated much of the conversation until our last day when during "happy hour," discussion shifted to the Astros. With my brother-in-law, a big Astros fan, I had backup, but clearly all eyes and ears were on me because of things like this story.

Let me just tell Astros fans, they are not here for any of our fandom. They don't want to hear how other teams cheat and the Astros just happened to get caught. They don't believe it was isolated and they believe the 2017 championship wasn't just tainted, but should be revoked entirely.

I taunted them a little, told them that beautiful trophy was right where it belonged in Houston, how fans here soaked up the hate like rays on the beach. But, I also tried to give them some rationale, explaining that there were loads of incidents in recent years. The Astros were just dumb enough to get caught.

It mostly fell on deaf ears.

Such a beautiful place for so much Astros hate.
Photo by Jeff Balke
I tried to say they didn't have much room to talk given Philly fans' proclivity for things like throwing batteries and booing Santa Claus (that was vociferously labeled erroneous). There was discussion of greasing street poles after the Eagles won the Super Bowl so drunken revelers wouldn't climb them.

They were having none of it. They are Philly fans after all. They just proceeded to accuse Jose Altuve of wearing a buzzer.

But, one thing we did agree on is that the hate for the Astros runs rather deep outside of Houston. Deeper than I expected, to be honest. We live in a bubble here where we reason that what happened in 2017 (as well as into 2019 if recent reports are to be believed) wasn't why the Astros won the title and that they are not illegitimate champions.

Get outside of Houston, probably outside Texas, and that narrative changes dramatically. The Astros are, quite clearly, the most hated team in all of baseball and it's not really close.

It wasn't all that surprising to know how they felt, but it did give me pause to hear the depth of their anger and frustration.

We're family, so it was mostly laughed off and there was plenty of good-natured ribbing. There was even a moment when my wife, the voice of reason, told me to "wrap it up." But I came away with the stark realization that the Astros of this era, despite all the talent and the title, are a tarnished franchise outside of Houston. And will be for quite a long time.
KEEP THE HOUSTON PRESS FREE... Since we started the Houston Press, it has been defined as the free, independent voice of Houston, and we'd like to keep it that way. With local media under siege, it's more important than ever for us to rally support behind funding our local journalism. You can help by participating in our "I Support" program, allowing us to keep offering readers access to our incisive coverage of local news, food and culture with no paywalls.
Make a one-time donation today for as little as $1.