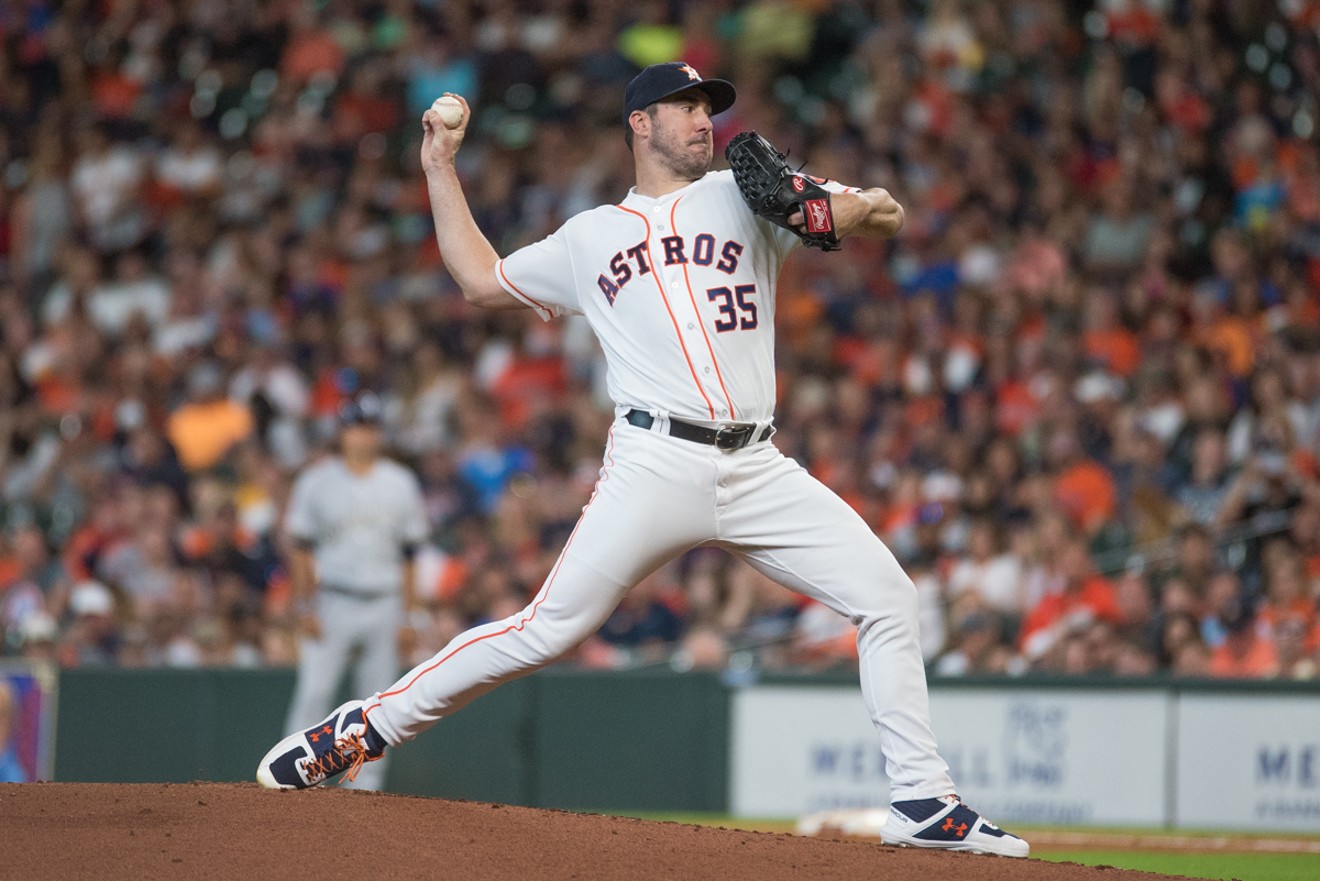 Bye bye, JV. Photo by Jack Gorman
Like the rest of Major League Baseball, the Astros are in the throes of the "Hot Stove League," a term coined to describe the controlled offseason frenzy of winter free agency. Winter meetings, which often include some of the busiest moments of the offseason, began in earnest Monday in San Diego. Every team along with coaches, front office staff, players and their representatives are in attendance.

Those meetings hadn't even officially opened yet when word came down that Justin Verlander had decided to leave the Astros and join the Mets on a two-year deal with $86 million. The Astros were never going to match a number of that size given the stable of talented young arms already under contract, but losing Verlander still hurts for fans who will reminisce about his accomplishments while here for five years — and there were plenty of them.

Still, baseball moves on and there is plenty to talk about in Astro land this week.

Verlander move fits with other moves by the organization in recent years.

It is difficult to imagine any team not re-signing a free agent pitcher that helped them win two World Series titles in four years and landed a pair of Cy Young Awards in that time including one this year. But, this is who the Astros are. Not only do they have a wealth of talent on the mound (more on that below), but they have demonstrated they are unwilling to sign players to huge contracts if they don't have to do so. In four straight seasons, they have opted out of re-signing Gerrit Cole, George Springer, Carlos Correa and now Verlander. We don't know what will happen going forward, but we saw what the team did with those previous moves.

This is a franchise, clearly under the total control of owner Jim Crane, that is willing to cut ties when they need to if they think it provides them with long term flexibility. In this case, it leaves them with roughly $40 million remaining under the luxury tax threshold (something Crane is loathe to breach) to sign additional players even after coming to terms with Rafael Montero and Jose Abreu. It makes them the envy of pretty much every team in baseball because they have managed to control their payroll — they aren't cheap as they are routinely in the top 10 in baseball in that category — while still fielding teams that content every year. It's hard to see players go, but the results are pretty damn compelling.

A trove of young players will try to fill the void left by Verlander.

Without JV on the bump to start the season, Framber Valdez becomes the ace-apparent, but he won't be alone. The Astros return Christian Javier, Lance McCullers, Jr., Luis Garcia and Jose Urquidy as well. Plus, they bring back Hunter Brown who demonstrated he is ready for the big leagues. That is already a six-man rotation setting aside potential injuries and bullpen assignments. That is in addition to the stacked bullpen that returns virtually every arm.

Yes, their team ERA without Verlander last season was nearly a full point higher, but that simply took them from the best rotation to just in the top five. And that was considering one starter for half the season was Jake Odorizzi and they only had McCullers and Brown for a month each. In the case of the Astros, they don't need to replace their ace with another ace. Not only do they arguably have a couple potentials already on the staff, but their fifth best pitcher on any given day is as good or better than an opponent's ace. Depth allowed them to let Verlander walk and it is that depth that will very likely make them another dangerous staff in 2023.

Yordan Alvarez was one of six Astros named to the All-MLB team.
Photo by Jack Gorman
Six Astros honored as All-MLB.

More Astros collected hardware on Monday when the league announced its All-MLB team representing who voters consider to be the best players at every position in baseball. Jose Altuve (2B), Yordan Alvarez (DH) were named to the first team along with pitchers Verlander and Valdez. Kyle Tucker (RF) and closer Ryan Pressly were given second team honors.

Astros linked to a number of free agents.

As mentioned above, the Astros have money to work with in free agency and the rumor mill is swirling with potential options. Reportedly, those options include catchers Wilson Contreras and Sean Murphy as well as outfielders Brandon Nimmo, Andrew Benintendi and Cody Bellinger. The most serious talks appear to be with Contreras, who was outstanding at the plate in 2022 and even a part of a nixed trade with the Astros at the deadline. His power from the left side would be a huge get for a team that appears to be looking for more offense and flexibility in the lineup. It has been reported that Contreras might split time between left field and designated hitter while providing a third backup at catcher.

On Monday, Murphy, who is on the trade block in Oakland, found his name in the Astro rumor mill. Murphy would be a talented young catcher to pair with veteran Martin Maldonado. Both Nimmo and Benintendi are coveted outfielders, though Nimmo has had some injury problems and Benintendi lacks pop even with his .300-plus average. Bellinger might be the most interesting. The former MVP saw his swing fall off a cliff the last two seasons and has been highly critical of the Astros after the cheating scandal. Yet, he is perhaps the most talented defensive center fielder on the market and probably could be gotten on a short term deal.
KEEP THE HOUSTON PRESS FREE... Since we started the Houston Press, it has been defined as the free, independent voice of Houston, and we'd like to keep it that way. With local media under siege, it's more important than ever for us to rally support behind funding our local journalism. You can help by participating in our "I Support" program, allowing us to keep offering readers access to our incisive coverage of local news, food and culture with no paywalls.
Make a one-time donation today for as little as $1.