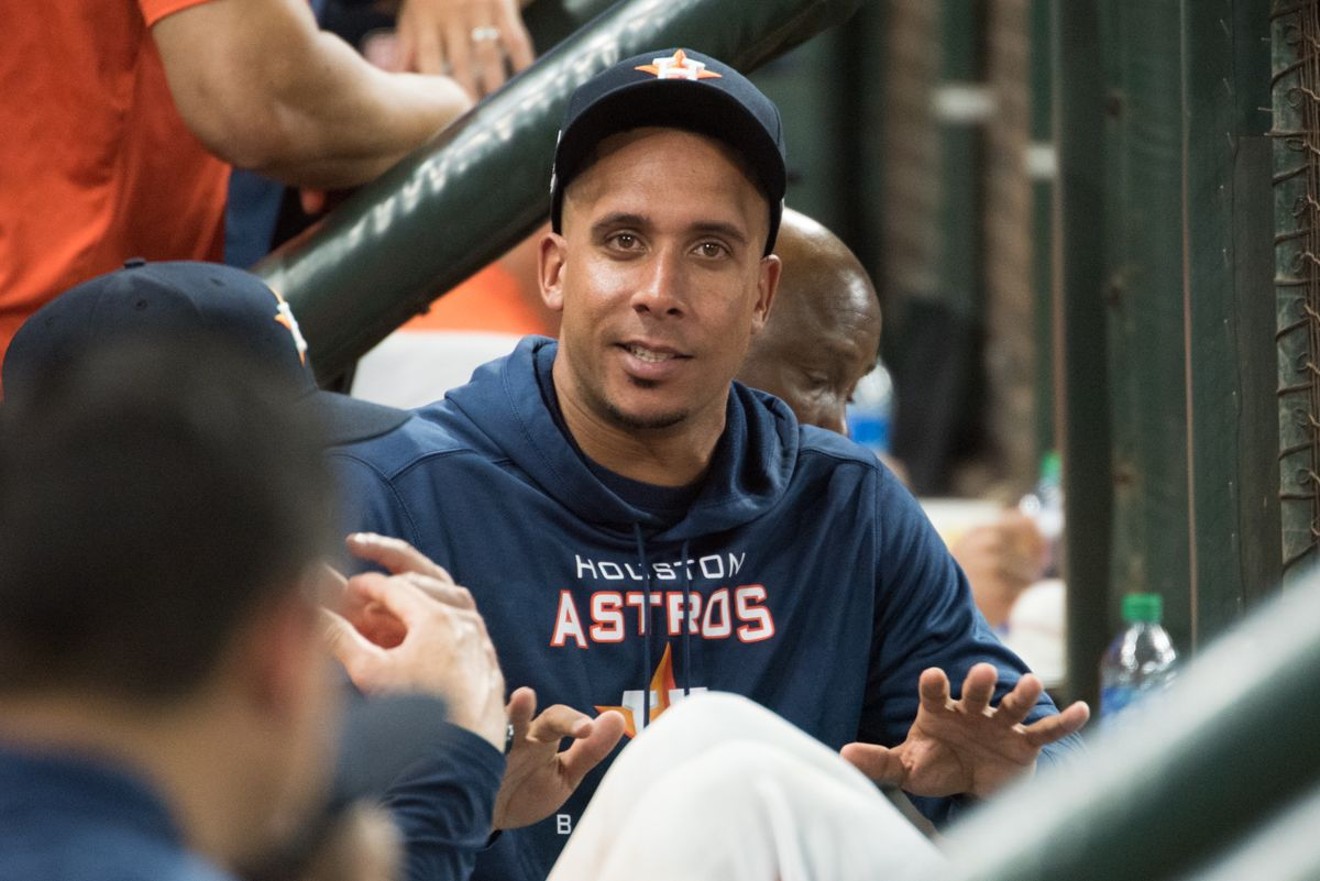 Could this be it for Michael Brantley this season? Photo by Jack Gorman
The Astros have been remarkably lucky this season. While they have missed Lance McCullers, Jr., who is close to returning from a long rehab stint, they have (thus far — huge asterisk) not sustained any major injuries to key players save one: Michael Brantley. While we await more word on him, witness newest Astro Trey Mancini and his exploits at the plate.

Additionally, the Astros haven't been world beaters lately, but neither have the Yankees. All that and more below.

The only Astros regular declared out officially has been catcher Jason Castro. Castro may retire anyway. But, we could be just weeks away from a similar declaration for Brantley. The Astros left fielder has been out since June 26 with a shoulder injury. He has yet to swing a bat. The Astros have been outstanding without him, but his steady bat has been a huge part of the team's success the last few seasons. They have the luxury of playing Yordan Alvarez in left as well as a hot hitting Aledmys Diaz. Mancini can man the corner spot as well given them options that don't include light hitting guys like Mauricio Dubon.

Still, having a veteran, contact-hitting lefty in the lineup would most certainly help, particularly as postseason approaches.

The veteran right handed starter has been on the shelf since the postseason last year when he suffered a strained flexor tendon in his pitching arm. And the Astros have been very cautious with his return given he had to have surgery prior to 2021. Despite last year's setback, McCullers had a terrific 2021 and the Astros are hoping he can build on that as they get ready for the playoffs. McCullers has been up and down at Triple A Sugar Land, but his pitching has been more about increasing his pitch count and throwing good looking pitches than getting out minor league batters.

It appears he should be back with the ballclub within days bringing their rotation back to six guys after the trade of Jake Odorizzi. They have the luxury to ween McCullers back into action with the arms they have and the lead in the division. Make no mistake, a healthy McCullers is great for the Astros.

Lance McCullers is set to return perhaps as soon as this week.
Photo by Jack Gorman
Dog days of summer setting in, but still reason to play hard.

Ahead by double digits in the division, it makes sense that the Astros are going to pace themselves. Giving guys days off — particularly since they played 18 days straight before Monday — is just good business. But, they may want to look at the standings because while they have been middling along the last week or so, they now find themselves within less than a game of the Yankees for the best record in the AL.

This isn't to say the Astros are struggling like the Yankees, but it might be a good idea to crank it up against in-state rivals the Rangers and figure out a way to beat the A's while they are in town this week.

The Astros have a six-game homestand this week against a pair of division rivals. The Rangers are in town for three before the A's visit Minute Maid. Neither team is good, but the A's have given the Astros fits this season. If they can capitalize on the weak schedule (they head to Chicago to face the White Sox next week), they might find themselves leading the AL by Sunday.
KEEP THE HOUSTON PRESS FREE... Since we started the Houston Press, it has been defined as the free, independent voice of Houston, and we'd like to keep it that way. With local media under siege, it's more important than ever for us to rally support behind funding our local journalism. You can help by participating in our "I Support" program, allowing us to keep offering readers access to our incisive coverage of local news, food and culture with no paywalls.
Make a one-time donation today for as little as $1.