Astros Week: A Broken Streak and an Early Trade

Minor injuries to guys like Jeremy Peña gets Astros in trade mode. Photo by Jack Gorman
All good things must come to an end, but rarely do they end with a sickening thud the way the Astros streak came to an abrupt halt Saturday with a 13-6 drubbing against the Nationals, one of the worst teams in baseball. Christian Javier, who had been brilliant in recent starts and relief appearances, got shellacked as did the surprisingly tough bullpen.

Fortunately, the Astros bounced back with another shutout the very next day, something that is becoming routine for them. Justin Verlander did not have his best stuff, but he still went five innings only giving up two hits. Rafael Montero, Ryan Stanek and Bryan Abreu did mop up duty giving up only two additional hits over four shutout innings.

The road trip continues this week in Boston. Here are some thoughts.

One streak ends, another begins.

The Astros weren't going to win out and, sure, the end was pretty rough, but they are clearly still the team we have been watching the past couple weeks proven by yet another shutout. Pitching and defense continue to be at the heart of their success with every starter (even Javier, Saturday notwithstanding) performing exceptionally during the win streak.

And the defense behind them has been equally stellar. The Astros are best in baseball by a wide margin in advanced statistical categories for defense. Given how good they have been over the past few years, that sound continue, especially with rookie Jeremy Peña playing like one of the best shortstops in baseball.

Astros shore up depth with trade.

On Saturday, the Astros acquired Maruicio Dubon from the Giants in exchange for Mike Papierski, a minor league catcher. Dubon, 27, has been a valuable utility man for San Francisco, playing all over the infield and in center field as well. He was slashing .240/.278/.377/.655 for the Giants and does help to shore up some bench depth for a team with some minor injuries to Peña, who should be back soon after dealing with some knee soreness.

Just as importantly, Aledmys Diaz has not started well and while Jake Meyers is set to start a rehab stint fairly soon, neither of the guys who have platooned in his absence — Chas McCormick and Jose Siri — have been consistent at the plate. Once a few guys get healthy, there should be a near embarrassment of riches for the 'Stros going forward and that isn't even counting Lance McCullers, Jr., who is still on track to be back on the mound sooner rather than later. 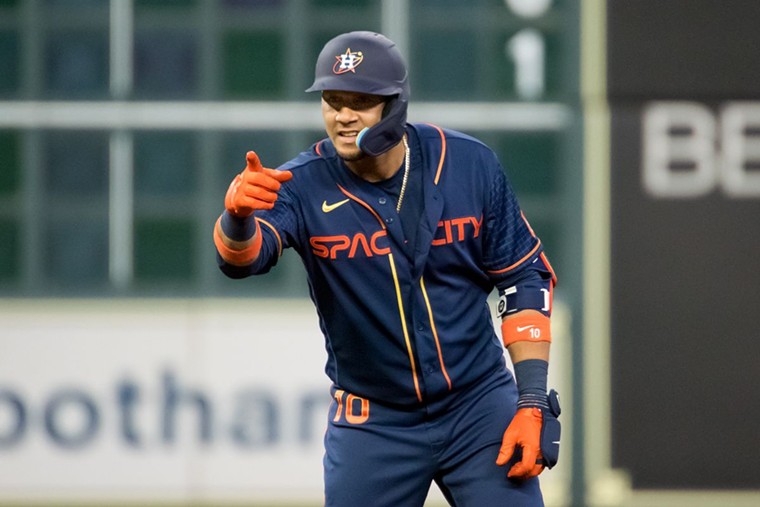 Yuli Gurriel went from batting below .100 to above .250 in the span of a few days.
Photo by Jack Gorman
Bats beginning to come around.

Some may have believed that Yuli Gurriel was finally starting to slow down in his late 30s despite winning the batting title last year. Not so fast there, impatient fan, because Gurriel finally began crushing the ball over the past week. He went 3-4 Sunday including a home run, and has raised his average nearly 200 points in a matter of days.

Jose Altuve is also seeing real improvement at the plate with another leadoff home run on Sunday and plenty of good contact this past week. Getting two of their veterans going at the dish will be huge for the Astros going forward.

The Astros are in Boston for a three-game set with the bottom-feeding Red Sox. You heard it. At 13-21, they are last in the AL East. The biggest problems for the Sox have been relief pitching and quality hitting depth. Their bullpen leads the league in "meltdowns," a term used to define how many times your relief pitching has decreased your chances of winning. And while they still have guys like Xander Bogaerts and J.D. Martinez, the rest of their lineup has been abysmal at the plate.

Finally, the Astros return home to Minute Maid Park for a four-game weekend series with the Rangers beginning Thursday. Predictably, the Rangers remain awful. Despite big signings in the offseason, they, like the Red Sox, didn't do much to address depth leaving them top heavy and wanting in a number of areas.
KEEP THE HOUSTON PRESS FREE... Since we started the Houston Press, it has been defined as the free, independent voice of Houston, and we'd like to keep it that way. With local media under siege, it's more important than ever for us to rally support behind funding our local journalism. You can help by participating in our "I Support" program, allowing us to keep offering readers access to our incisive coverage of local news, food and culture with no paywalls.
Make a one-time donation today for as little as $1.