Houston Gets Dumped On Again

Shades of horrors past. Waters rose around the Wortham but apparently not enough to flood it as it did in Harvey. Photo by Jennifer Lake
So the coastal areas were supposed to be hard hit by Tropical Storm Beta but inland would be pretty much OK. And the rain was to move away from the southwest parts of Houston and the harder hit suburbs in Missouri City and Pearland on Tuesday night and move to the northeast.

Except all of that didn't happen quite as expected which only proves that in weather prediction "sure things" are as rare as unicorns. There was continued heavy rain in Missouri City Tuesday night. The area hard hit by thunderstorms and flooding was in the northwest quadrant of Houston bordered by I-10 to the south and I-45 to the east. And inlanders got a lot more rain that it was initially thought they'd get from this slow moving storm.

Overnight, the city of Houston at 11 p.m. issued a flood warning from the National Weather Service lasting till 2 a.m. for the northwest section of the city saying that flooding had already occurred in low-lying areas there. 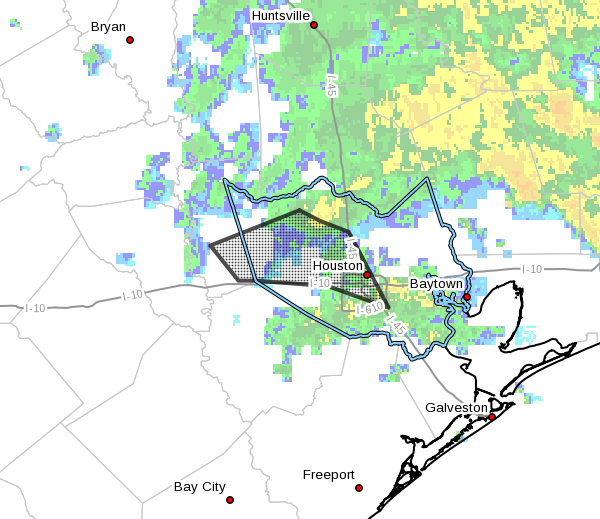 Waking up to some flooding.
City of Houston/National Weather Service
Houston ISD announced Wednesday morning that it would be taking another day to get back to normal, keeping its facilities and digital learning centers closed as well as canceling food deliveries to apartment complexes and for curbside pickup.

As on Tuesday, HISD students and teachers who had internet connections will be continuing with their online classes today.

Houston Health Department COVID-19 testing sites will re-open Wednesday with some change in hours. Go to HoustonEmergency.org/covid19 for the schedule. However the county's mobile testing sites are closed until Thursday because of street flooding.

As Mayor Sylvester Turner noted in a 6 p.m. press conference Tuesday, they were keeping a close eye on the Wortham Center. Renovations at the Wortham took more than a year after waters from Buffalo Bayou engulfed the performing arts facility in 2017. The past three days, the Wortham was tested but ultimately spared a reprise of Hurricane Harvey. 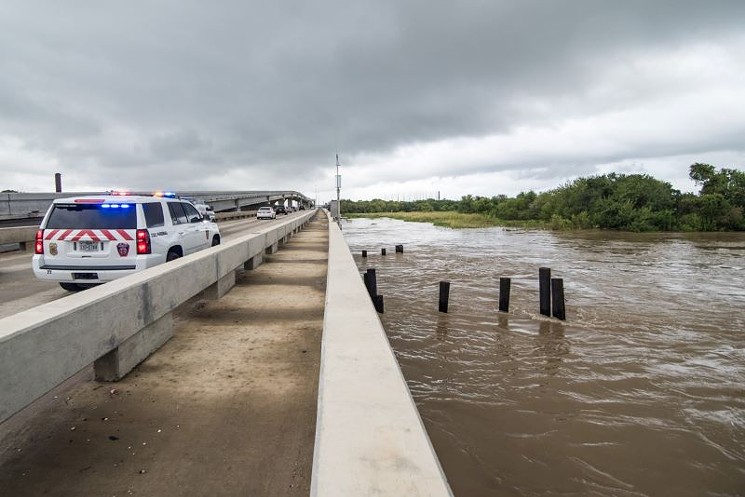 Clear Creek flooded after receiving a significant amount of rain.
Photo by Jack Gorman
And as weather guru Eric Berger of spacecityweather.com noted this morning as Beta finally took its heaviest rainfall with it to the east, Clear Creek watershed was the only one to flood significantly. But others, including Buffalo Bayou by the downtown performance arts centers came close. A slightly more intense storm would have done a lot more damage.

As the mayor said Tuesday, the still incomplete work done on Brays Bayou appeared to be effective and Meyerland didn't get slammed again. And it's true as he said, Houston was built on a bayou and we're still living in bayou land. Centerpoint Energy was Johnny-on-the-spot and restored power as quickly as possible. Houstonians get pats on the back for knowing how to endure storms and the surging brown water that drapes the area.

Until city, county and federal officials develop and implement a more comprehensive flood plan with all due haste, the area's residents won't be able to stop telling weather war stories — over and over again.

Aren't we tired of this?
Photo by Jennifer Lake
KEEP THE HOUSTON PRESS FREE... Since we started the Houston Press, it has been defined as the free, independent voice of Houston, and we'd like to keep it that way. With local media under siege, it's more important than ever for us to rally support behind funding our local journalism. You can help by participating in our "I Support" program, allowing us to keep offering readers access to our incisive coverage of local news, food and culture with no paywalls.
Make a one-time donation today for as little as $1.