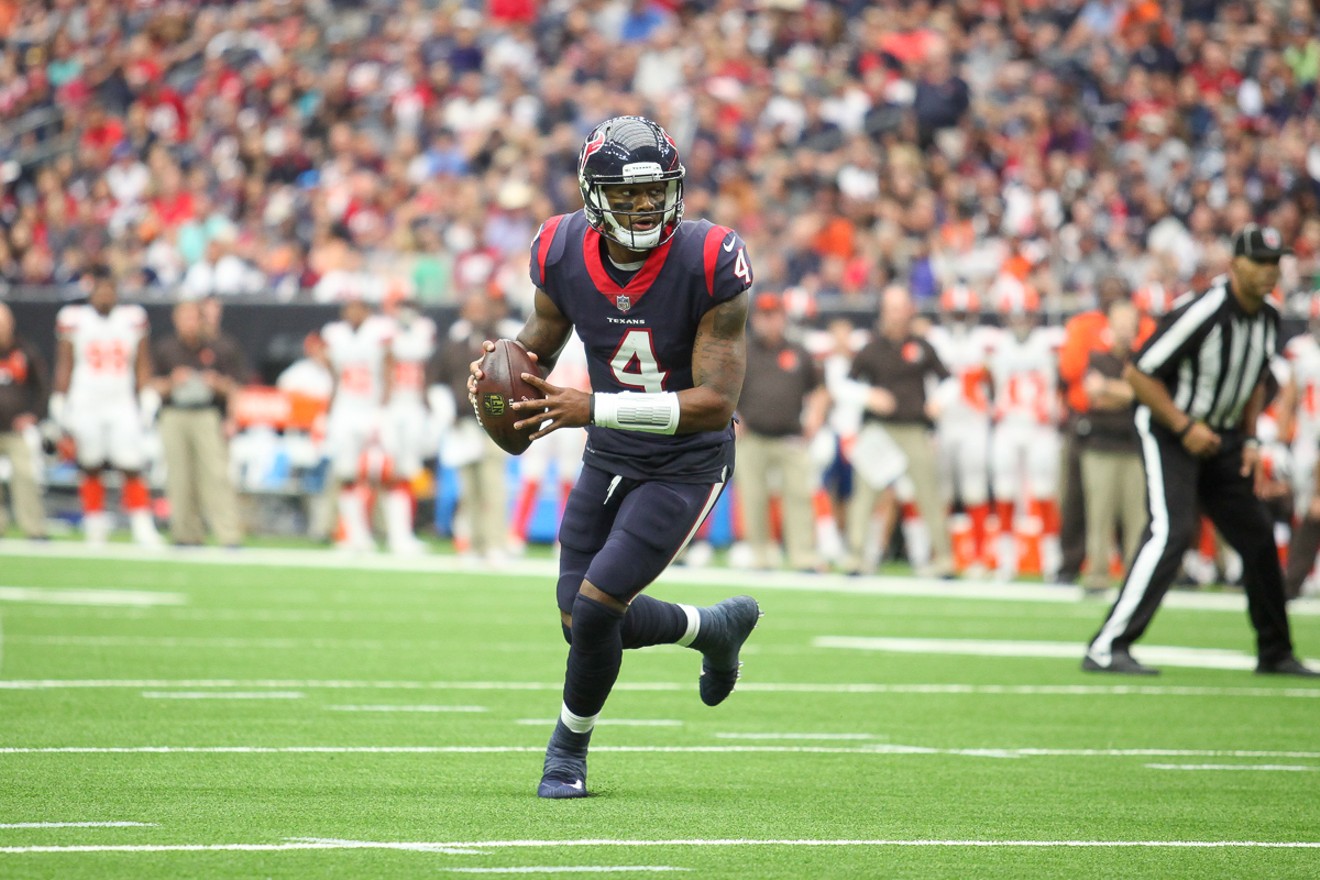 Deshaun Watson appears to be good to go for 2018. Photo by Eric Sauseda
Deshaun Watson's healing powers were never in question. Back in his college days at Clemson, he played a game on a torn ACL in his left knee, and then, once surgery was performed, he was back on the field in near record time that subsequent spring. The magic of Deshaun Watson knows no bounds.

Unfortunately, Texan fans had to go back and cite the stories of said college football healing powers during the 2017 NFL season, when Watson's mind-blowing, record-shattering six game run as the Texans' starting quarterback ended ignominiously with a non-contact torn ACL in his right knee on a Thursday in practice. It was truly one of the worst days of the franchise in recent history, for a franchise that has had its fair share of horrible days.

However, hope springs eternal, and we all knew Watson would be coming back, we just weren't totally sure of the timetable. Well, on the NFL Network's morning show, Good Morning Football, Texans head coach Bill O'Brien confirmed Monday, among other things, that Watson is on track to be back for training camp (Fast forward to about the 4:00 mark for the Watson-based exchange):


I don't think this is a huge surprise that Watson will be ready to go. The rehab videos and every public appearance since the season ended give the impression that he is good to go, and thank all of the football gods, because he is virtually 90 percent of the reason that the Texans are among the favorites to win the AFC.

Other topics that O'Brien touched upon in this interview:

"Jordan [Akins] was a guy that we had in the Senior Bowl. I tell everybody 'You really don't want to be coaching in the Senior Bowl every year, but I think, if you can do it once it is a good opportunity for you, because you really get a chance to coach these guys and see them work on the practice field.' [With Jordan] we saw some things we really liked, and when he was available, we felt it was a real good value pick. Justin Reid is a really smart guy, came in this weekend and did a really nice job. Keke Coutee, we really like what he did in college, and came in here this weekend and picked up the system pretty well for what we were teaching. We had eight draft picks, we think they can all help us in some way, shape or form."


* On the possibility of signing Dez Bryant (killer side step by O'Brien here):

"We evaluate it every day, just like every team in the NFL. We are constantly talking about things that may improve our team. Dez Bryant has obviously had a great career. Look, there are gonna be a lot of guys out there — are they gonna fit? Are they gonna be the type of person that you want in your locker room? All those things. These are constant discussions, not just with one player, but with all the players. I think that's what every team does during the offseason, so we're no different than any other team. We are always gonna try to do what's best for our team."

"When I see [Watt] every day, he's in here early, stays late. He is doing a lot of great things, both on and off the field, relative to being able to be back and ready to go. Obviously, we are not gonna rush any of our injured guys. J.J. is doing a great job with his rehab, and I've said this time and time again — this guy is one of the best players to ever play the game. I would never bet against J.J. Watt. he is gonna be back, he is gonna be at full strength, and he is gonna help us win a lot of games."


Listen to Sean Pendergast on SportsRadio 610 from 2 to 6 p.m. weekdays. Also, follow him on Twitter at http://twitter.com/SeanTPendergast and like him on Facebook at https://www.facebook.com/SeanTPendergast.
KEEP THE HOUSTON PRESS FREE... Since we started the Houston Press, it has been defined as the free, independent voice of Houston, and we'd like to keep it that way. With local media under siege, it's more important than ever for us to rally support behind funding our local journalism. You can help by participating in our "I Support" program, allowing us to keep offering readers access to our incisive coverage of local news, food and culture with no paywalls.
Make a one-time donation today for as little as $1.