Who's Making Amazon Prime Days Happen and What Do They Have to Do to Make You Happy?

Her scanner machine was down for a while and had to be repaired. But she won't be docked for an equipment malfunction, we were told. Photo by Margaret Downing 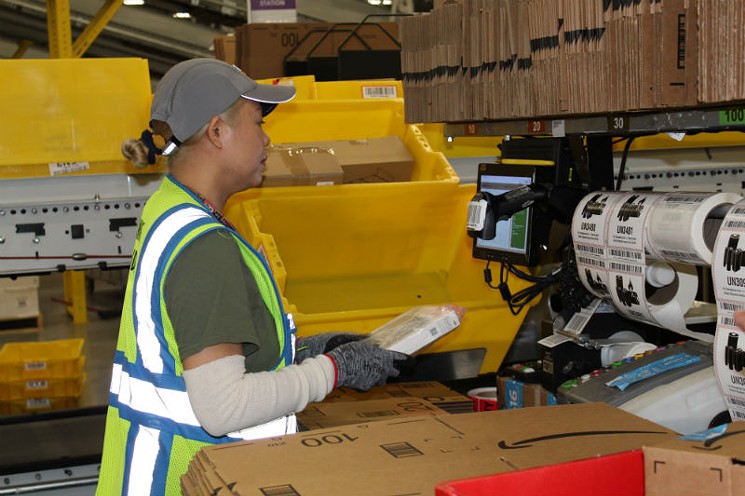 Her scanner machine was down for a while and had to be repaired. But she won't be docked for an equipment malfunction, we were told.
Photo by Margaret Downing

Surrounded by calls for work stoppages and strikes and following a highly uncomplimentary segment on the working life of its employees on Last Week Tonight with host John Oliver, Amazon is soldiering on with its two special Amazon Prime days starting today through Tuesday.

Whether it was these factors or just coincidence, Amazon.com Inc. founder, chairman and CEO Jeff Bezos announced last week that his company is setting aside up to $700 million to help its employees get training and certifications in coding and other skill sets that can lead to better jobs both within and without Amazon. This is in addition presumably to the program Amazon already had in place called Career Choice in which Amazon pays 95 percent of the cost of tuition for its employees to take courses that can lead to in-demand jobs.

Amazon Prime Days are two days in which Amazon rewards its Prime members with special deals only they can take advantage of. Clearly the idea is to inspire more people to plunk down $99 a year to become Prime members and be assured of the fastest possible delivery service. And to sell more Amazon stuff.

The continuing question, of course, the one raised by potential strikers and the John Oliver piece, is whether requiring workers to perform at a high speed to meet quotas or risk getting their pay docked or losing their jobs if they don't, is really such a great deal for its employees. Even at a job that pays $15 an hour to start and offers health benefits that begin on Day One of employment.

Amazon has its so-called wish fulfillment centers scattered all over the United States (nine in Texas) and the world and the Houston area has more than one. Last week, the Houston Press got a one-on-one private tour of the Amazon facility on Ella Boulevard which opened in July 2017, conducted by pr specialist Donna Beadle, who lives in Minnesota and is responsible for public relations communications in a north to south swath of the middle of the country.

Beadle is a very pleasant, articulate and effective public relations officer. Asked about the John Oliver piece, she said a lot of it was wrong. Asked about her home state of Minnesota where some people have called for a strike today, she said that Amazon has been trying to work things out with these employees but that "they have every right to protest."

Security is tight at the north Houston facility located pretty much in the middle of nowhere. It is, like most Amazon facilities, immense, although not as big as some. Visitors, including job applicants, are greeted in the front lobby and given instructions, badges and vests on how to enter. A sign says no cell phones. The Press was allowed to take photographs of some things, but not others (no shots of the screen readouts of products, certain delivery areas). Still, other than the two weeks leading up to Prime Days, the center offers twice daily tours to members of the public. All they have to do is stay between the safety lines on the floor as visitors walk through and anyone with long hair has to tie it back. 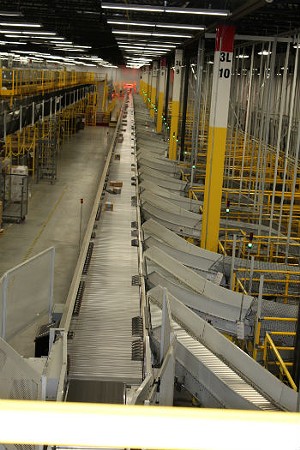 A long line of product heading for where?
Photo by Margaret Downing
The facility on Ella handles only small to medium sized items  such as toys, baby products and small electronics for same day shipping. More importantly, given the Last Week Tonight report, the 855,000 square foot facility is filled with robots who bring the materials to the workers rather than having employees trekking for miles on end trying to locate the hair dryer on aisle 57 to bring it back to the other side of the building. (That's not the case in all Amazon centers; other facilities handle heavier items and it is humans not robots who are making those long walks.}

But forget about any visions of human-like robots. Think more of a robot vacuum cleaner, but with a lot more programming that enables it to slide under shelving and move that entire shelf unit about the facility to the "stowers" and "pickers" who need it.

In fact, the whole enterprise seems to be a symbiotic relationship between the 1,500 humans who work at this facility and high tech. Scanners tell the front line sorters if they can or can't put a product on a particular shelf. Other scanners tell the pickers if they are picking up the right product that someone has ordered. "If it's not right, they get a red light," Beadle says. And scanners produce the delivery address stickers that get what's ordered to the right place. Robots alleviate a lot of the walking around, but they make mistakes too.

When a product falls off a shelf, a human being must go in to pick it up. "They wear a safety vest fo the robots won't go over them," Beadle says, comparing it to "a force field."

Employees are entitled to two breaks and a half-hour lunch. For the most part their work appears to be an interface with their station — one person working on one many tiered shelf of products. A woman assigned to pack a single product in a single box does that for her entire shift, over and over. A break in the action came when her scanner malfunctioned, which meant another human had to come in to repair it. Obviously this is not a job for anyone who craves constant social interaction. (There are long stretches inside the warehouse with no humans in sight, just conveyer belts humming along.)

But it is a job that offers parental leave benefits that offer up to 20 weeks of paid time off — something that few other companies match at least not in the United States.

The shelves move as if by magic, thanks to the red robots underneath.
Photo by Margaret Downing
Employees work four, ten hour days with three days off each week, Beadle says. During the holidays such as at the end of the year, they hire extra seasonal employees who have the chance to move up to permanent, full-time employment, Beadle says.

"The rate is very doable," says Beadle. And she said, contrary to the Last Week Tonight report, that employees can take bathroom breaks whenever they need to. (Although actually in the report it didn't say they couldn't take them. It said they didn't because they were afraid they'd fall behind in the quota set for them. And that as a result, some employees said they'd peed themselves.)

"There are 100 fulfillment centers globally with 200,000 robots," Beadle says. Of those, she says, no more than one robot at a facility goes down every day and there's a robotics team on board to fix the off-line unit. 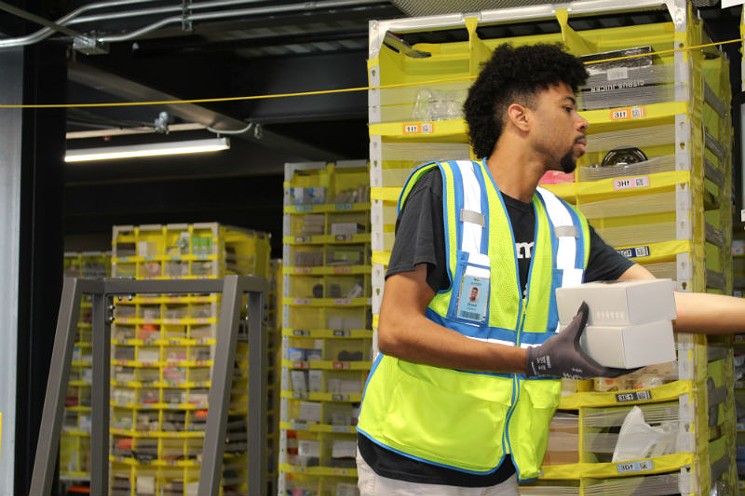 Making it perfect, just for you.
Photo by Margaret Downing
During the entire tour, all the employees stayed very busy, but no one looked like they were going to have a melt-down under pressure. One worker sat out in the front lobby for a while, apparently he didn't feel well. Two different managers came by to check on him in the space of ten minutes. Asked by the Press how long he'd been working there, he said two years and added that he liked it.

But after exiting by the front door, I was stopped by an employee who wanted to know what I was doing there. He was excited to hear that the Houston Press was writing about Amazon. Asked if it was true that some employees have said the pace too fast, he agreed. He said people wouldn't say it publicly but it was stressful.

He agreed, however, that the benefits were good. Asked for his biggest complaint about working for Amazon, he said, "The hours. Amazon will only let you work 40 hours a week and I want more."

So Amazon offers people a tough job at a higher rate of pay and better benefits than most places would do for people with that level of education and job experience. And now, more than before, through funded education it's offering a way out of that same job. Whether it's soul-crushing, non-creative work that would drive many people crazy, a real-life video game involving work with robots in a quest to beat the system, or simply an honorable way to pay bills and support a family with three days off a week — well, however you do the math the components are variable.

As a computer might say: reserving final conclusion. Need more data.
KEEP THE HOUSTON PRESS FREE... Since we started the Houston Press, it has been defined as the free, independent voice of Houston, and we'd like to keep it that way. With local media under siege, it's more important than ever for us to rally support behind funding our local journalism. You can help by participating in our "I Support" program, allowing us to keep offering readers access to our incisive coverage of local news, food and culture with no paywalls.
Make a one-time donation today for as little as $1.