Alas, in the end, the Chiefs have Patrick Mahomes and the Texans have Davis Mills, and that wound up being the difference. Mahomes had 336 yards passing and chipped away at the Texans all day, helping Kansas City overcome two turnovers and ten penalties to win 30-24 in overtime. Mills had the ball in overtime with a chance to win the game, and fumbled on the Texans' first play from scrimmage in overtime, setting up the Chiefs in Texans territory.

One play later, Jerick McKinnon was dancing into the end zone and the game was over, and the crowd at NRG Stadium — largely, Chiefs fans — went wild. There were winners and losers on the weekend, as always, and here they are:

4. Tremon Smith
The Texans have been operating for the second half of the season without Derek Stingley, Jr., and most of the last two games without Steven Nelson. Those are the two starting cornerbacks for this team. Yesterday, Tremon Smith got the start, and for a second consecutive week, he made game changing plays for this defense. Last week, it was two interceptions off of Dak Prescott, and on Sunday Smith forced a fumble that led to a go ahead touchdown in the third quarter. As guys fight for their spots on the roster next season, Smith is making these last few weeks count.

3. The 1992-1993 Houston Oilers
We are coming up on the 30 year anniversary of the infamous playoff game in Buffalo, in which the Houston Oilers (now playing in Nashville as the Tennessee Zombie Oilers) blew a 35-3 lead to the Bills. January 3, 1993 was the date, and since then, we've seen dozens of huge NFL comebacks, but none as big as the 32 point comeback by the Bills. Until Saturday afternoon. The Indianapolis Colts were kind enough to blow a 33 point lead to the Minnesota Vikings in Minnesota, and now the Oilers are off the hook. All hail, Kirk Cousins! 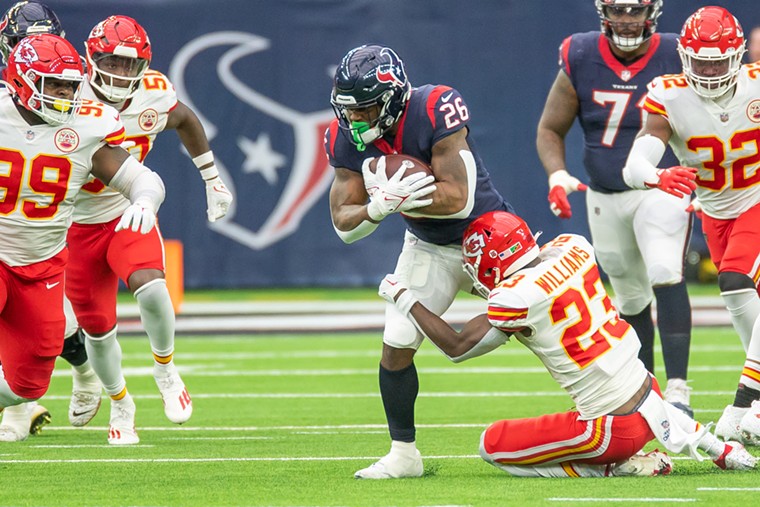 Royce Freeman was called up from the practice squad and had 51 yards rushing.
Photo by Jack Gorman
2. Royce Freeman
The Texans will be without Dameon Pierce (high ankle sprain) for the rest of the season, so running the football, which was already difficult even with the battering ram that was Pierce, will be even more difficult. Rex Burkhead and Dare Ogunbowale just ain't it. I don't know if Royce Freeman is it, but he easily ran with the most burst of any of the running backs on Sunday. Just 48 hours after being signed off the practice squad, Freeman had a respectable 51 yards on 11 carries. He's probably playing for a spot in training camp next season, but Sunday should help in that endeavor. 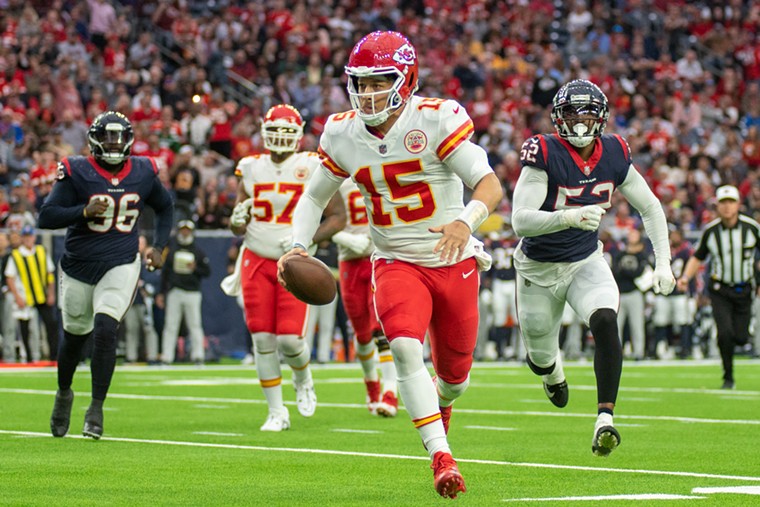 1. Patrick Mahomes
While it feels like the Texans have seen plenty of Mahomes through his first few seasons in the league (three times, before today, is the actual number), this was the first time he's played a professional game at NRG Stadium. (Fun fact — Mahomes DID play in the Texas Bowl here in 2015.) So we got to see what a game changer he is. The dude is straight up magical, and his ability to throw lasers from pretty much any fashion of body contortion is supremely frustrating for opposing fans. He can chip away at you in the screen game, he can scramble for first downs, and he makes you defend pretty much every blade of grass (or rubber pellet, on field turf) on the field. He was awesome yesterday.

4. The Houston Texans healthcare insurance provider
Through the first half fo the season, the Texans had actually had some of the better injury luck in the NFL,from both a team health standpoint and opponents' playing without some of their marquee player. Honestly, that they had such good injury luck, and were still 1-11-1 going into Sunday is yet another indicator for just how bad this team is. Now, here comes the injury bug! Dameon Pierce and Derek Stingley are both done with their rookie seasons. They're on injured reserve. Nico Collins and Kenyon Green are now banged up. So is Steven Nelson. Brandin Cooks may or may not be faking his way through some sort of calf ailment. This is where the season goes from bad to worse to flushed down the toilet.

3. The Jeff Driskel experiment
It was fun while it lasted! Driskel was elevated from the practice squad last week for the Dallas game, and provided a nice change of pace, and about a dozen plays that the Cowboys had not seen on film. A week later, with ample film now available, Kansas City seemed to be ready for anything involving Driskel. Aside from a few positive plays on the opening drive, any play in which the ball was touched by Driskel ended very poorly, to the point where Hamilton probably scrapped Driskel at least a quarter too late.

2. Andy Reid, game manager
It's a shame the Texans couldn't pull off this victory, because it would have been nice to punish Chiefs head coach Andy Reid for some really shoddy game management down the stretch in regulation. WIth the ball in Texans territory, and under a minute to go, Reid chose to play it safe and set up his kicker for a somewhat difficult 52 yard field goal attempt. The Chiefs certainly had the time and the quarterback to chew up more yardage and move in closer, but Reid settled for a long field goal that Harrison Butker missed, and the game went to overtime. Sadly, the Texans could not make Reid pay, and the throng of Chiefs fans in attendance —- a colossal throng, by the way —- went home happy.

1. The New England Patriots
Hey Texan fans, sure you lost in overtime, but at least you didn't lose your game like this....

Checking in on our friends at @WEEI 🙏pic.twitter.com/dNifMhNO8j