The U.S. State Department has ordered China to close its consulate in Houston by Friday. Photo by Kate McLean

The U.S. State Department revealed on Wednesday that it has ordered China to shut down its Houston consulate at 3417 Montrose Boulevard by Friday “in order to protect American intellectual property and Americans’ private information.”

The announcement came after the Houston Fire Department and City police were called to the Consulate General of China in Houston Tuesday night due to reports of documents being burned in the consulate’s courtyard.

HFD explained in a statement that fire crews were denied access to the building, and that the international agreement between the United States and China requires consent from the consulate’s staff to enter the property. Firefighters remained on the scene Tuesday night until they were confident that there was no longer any fire threat to either the consulate’s occupants or the surrounding area.

State Department spokesperson Morgan Ortagus issued a statement on the consulate’s closure Wednesday morning, blaming the decision on purported Chinese subterfuge. “The United States will not tolerate the PRC’s violations of our sovereignty and intimidation of our people, just as we have not tolerated the PRC’s unfair trade practices, theft of American jobs, and other egregious behavior,” Ortagus said.

Ortagus didn’t explain why the Houston consulate was specifically chosen to be closed. China currently has consulates in Chicago, Los Angeles, San Francisco and New York City, but only Houston’s has been shut down as of Wednesday.

The decision is the latest sign of escalating tensions between America and China in recent weeks. On Tuesday, the U.S. Department of Justice indicted two Chinese nationals for allegedly trying to steal confidential business data and COVID-19 vaccine research through computer hacking on behalf of the People’s Republic of China.

In a White House briefing Tuesday afternoon, President Trump continually referred to the coronavirus as “the China virus,” in line with his administration's repeated attempts to shift attention to China’s failure to contain the virus in the midst of the dramatically worsening spread of COVID-19 within the U.S. over the past two months.

Chinese Foreign Ministry spokesman Wang Wenbin said that the Chinese government was told by U.S. officials on Tuesday that the U.S. was ordering the closure of their Houston consulate. Wenbin called on the U.S. to “immediately abolish this erroneous decision,” which he called a “revolting and unjustified move” that would undermine Chinese-U.S. relations. 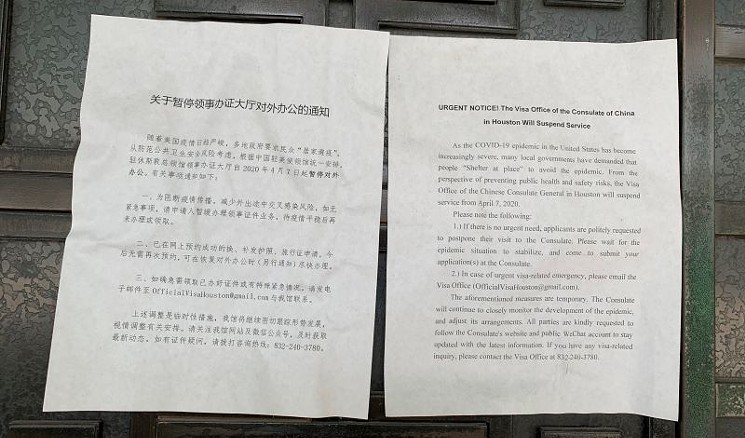 The notice posted by the consulate.
Photo by Kate McLean
KEEP THE HOUSTON PRESS FREE... Since we started the Houston Press, it has been defined as the free, independent voice of Houston, and we'd like to keep it that way. With local media under siege, it's more important than ever for us to rally support behind funding our local journalism. You can help by participating in our "I Support" program, allowing us to keep offering readers access to our incisive coverage of local news, food and culture with no paywalls.
Make a one-time donation today for as little as $1.