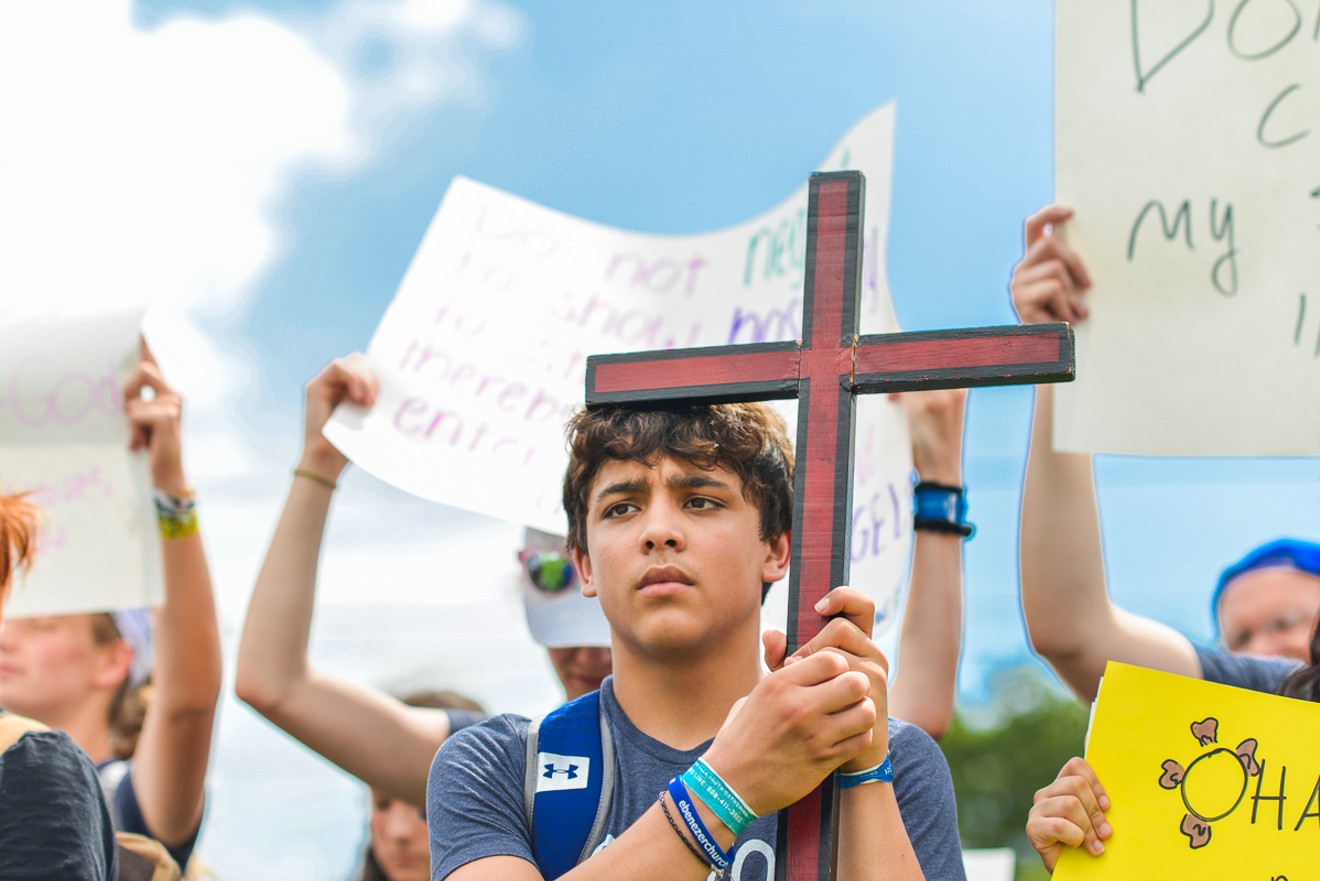 Photo by Mohammad Mia
More than 30,000 teenagers and youth leaders from across the country have arrived in Houston for the Evangelical Lutheran Church of America Youth Gathering. The meeting, which takes place every three years, brings high school students together for a week of faith building, learning, Bible study, as well as service and fellowship. The theme for this year’s convocation is “This Changes Everything” and seeks to expand upon the ideals of becoming someone, finding a place to belong, and doing something that changes the world.

With this in mind, it made sense that one group of teens coming from Chicago felt compelled to act in light of what they deemed the ongoing injustice of child separation and family detention.

This select group of teenagers participating in the conference chose to serve by moving their feet and raising their voices in protest. More than 300 teenagers and their youth leaders protested outside of the NRG Center, carrying signs, chanting, and singing “We Shall Overcome” as they made their way to the iconic statue of a mother receiving her child, which sits in front of the OBGYN Medical Center Associates.

As members took turns speaking, each condemned the policies implemented under our current administration and repeated the importance of caring for those seeking refuge.  Melanie, 15, (whose parents didn't want her last name used) spoke about why she chose to get involved:

“I am Mexican myself and the decisions that [President Trump] has made have impacted me and my family severely. It scares me because having my family so close to me it’s hard to imagine not being able to say bye to them every day. It’s scary to think that you could lose a family member in an instant and not see them again.”

When asked what advice she would give to young individuals such as herself, Melanie said, “Don’t be afraid. We are teenagers and we can just come out and say something, put it on Facebook, Instagram, Twitter, and have an instant impact. You never know how far your message will go or how much it will affect others.”

The national issues regarding detention and separation have come close to home recently, with news of a detention center planned for downtown Houston. While Mayor Sylvester Turner has condemned the move and has refused to support the proposal by Southwest Key Programs, many are still uncertain about its future. When asked whether the proposed site inspired the teenagers to act, Melanie responded, “It definitely did because we don’t really know what’s going on behind any wall right now. You can’t see through the walls and you can’t tell whether the information they’re sharing is true or not.”

Another teenager who served as one of the speakers in the protest, Xanath, 15, (whose parents also didn't want her name used) said she couldn’t help but get involved, “I’ve heard my mom tell me that someday it could happen to us. It really disappoints me and makes me upset that this happens to other families and, while I’m not in their position, it hurts to see them suffering.”

The teens spent the first part of the day calling political leaders and urging them to take action, while also taking the time to write letters to children being detained. While the youth gathering is in its fourth day and is scheduled to end this upcoming Sunday, Xanath shared that she has been inspired by the speakers and hopes to continue working on this issue when she returns home to Chicago.

She left us with these last words on why we should care about families being separated, “Whether we know them or not, the fact that they’re still human beings means that we shouldn’t dehumanize them.”
KEEP THE HOUSTON PRESS FREE... Since we started the Houston Press, it has been defined as the free, independent voice of Houston, and we'd like to keep it that way. With local media under siege, it's more important than ever for us to rally support behind funding our local journalism. You can help by participating in our "I Support" program, allowing us to keep offering readers access to our incisive coverage of local news, food and culture with no paywalls.
Make a one-time donation today for as little as $1.

Houston Press contributor Mohammad Mia is a freelance photographer and journalist whose interested in exploring what it means to be human. Whether covering Houston activism or music festivals, he likes to keep an eye out for the small moments that make life worth living. When he's not working on The Not So Cool podcast you can find him reading or enjoying a taco, or four, at Tacos Tierra Caliente.