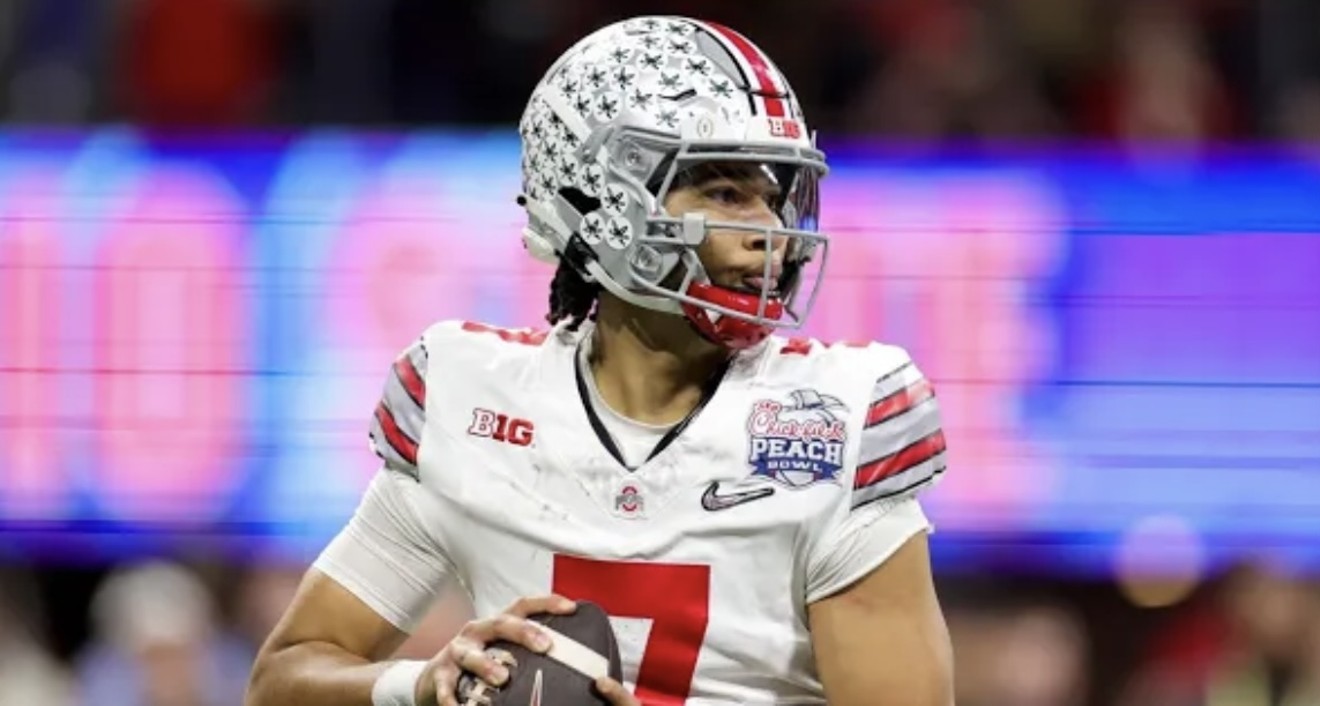 C.J. Stroud will enter the NFL Draft and is immediately a prospect for the Houston Texans. Screen grab from YouTube
We know that a large portion of the Houston Texans' fan base, what remains of it, was very upset over the Texans defeating the Indianapolis Colts in Week 18, and thus losing out on the No. 1 overall pick in the draft. There was a second portion of the fan base, though, who felt okay about the whole thing, knowing that picking second would mean the Texans are assured of one of the top TWO quarterbacks.

I count myself among the latter crew. I was upset for about 15 minutes after the win over the Colts, but then realized that if Alabama's Bryce Young or Ohio State's C.J. Stroud became a Houston Texan, I'd be okay with either one.

Well, it's been a nerve-racking last few days for the "hey, as long as the Texans are in the top two picks" crowd, because while Young announced he would go pro shortly after the Crimson Tide's win over Kansas State in the Sugar Bowl, Stroud has been silent. Until today morning, there had been nary a peep out of Stroud's camp (which includes Deshaun Watson's agent David Mulugheta, who represents Stroud, and more on that in a minute).

Well, finally, on Monday morning, we got a peep, and oh what it peep it was:

So, we can all breathe easier. There will be at least one of the top two quarterbacks in the upcoming draft still sitting there when the Texans pick second, and if Chicago, who has the No. 1 pick, decides to take a non-quarterback instead of trading the pick or selecting a QB for themselves, then the Texans will have their pick of the QB litter!

As for Stroud, the talk had been heating up for the last few days that he might stay at Ohio State for one more season. The reasons for possibly staying were twofold (and VERY speculative). First, Stroud is one of the most decorated college athletes in the race for Name Image Likeness (NIL) dollars, with several sponsors likely providing a seven figure income. Second, while Stroud has had a very good career, he never beat Michigan, never won the Big Ten, and was a two time finalist for the Heisman Trophy, but never won it.

In the end, Stroud is letting his body of work stand on its own, and is going pro. Fortunately for Stroud, his final performance may have been his most impressive, as he was scintillating in a 42-41 loss to eventual champion Georgia in the national playoff semifinal. For your viewing pleasure, here are some highlights from that performance:
As for the Texans, more specifically, the preference among fans still seems to that they find a way to acquire Bryce Young as their future signal caller, although they may have to trade up to the first pick to guarantee they get him. Part of the trepidation with the Texans' chasing Stroud is the presence of Mulugheta, who's believed to have been a strong voice in Watson's decision to ask for a trade in January 2021, before the massage lawsuits began flying.

However, Texans GM Nick Caserio said in an interview on my radio show that he has no problem working with Mulugheta. Caserio prides himself on keeping good relations with the agent community, including Mulugheta. Here is the audio of Caserio indicating as such:

There is still a long way to go in this process — the NFL Combine in February, visits by prospects to NRG Stadium, and the countless mock drafts that will steer our emotions the next 100 days or so. One thing is now certain, though, and it's this — if you want to dream about a top flight quarterback prospect, Texans fan, you basically got permission to do so on Monday morning. C.J. Stroud gave you the go-ahead.