With More Cold and Precipitation on the Way, Houston Remains an Ice Palace 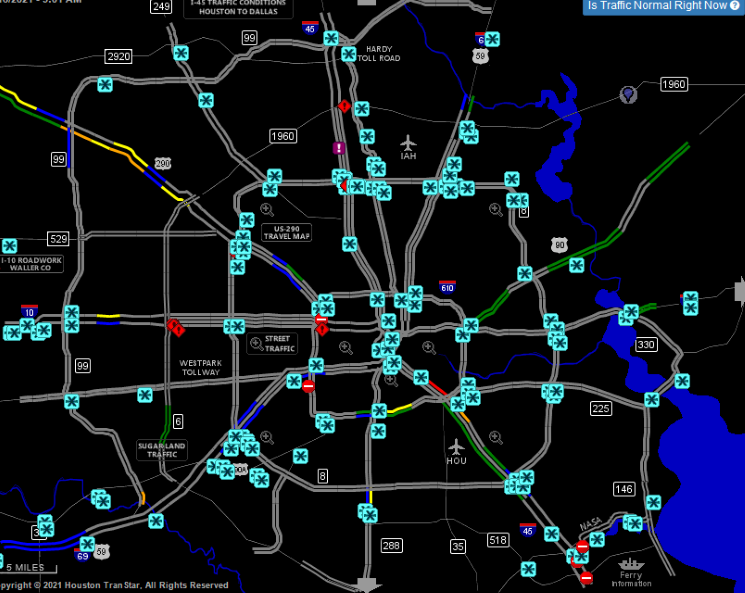 Lots of icy roads remain with more expected Tuesday night.
Transtar screenshot
As 1.4 million Houston area residents remain without power — and some were added overnight although a few lucky souls got their power restored — Houston can expect warming trends during the day Tuesday before the next storm arrives in the area late tonight.

With or without power, some residents have no water because of the intense cold. As we reported earlier, calls to plumbing repair shops are in overdrive.

While some forecasters are saying they don't expect the region will climb out of freezing temperatures until Friday, in Tuesday morning's report from Space City Weather, Eric Berger said temperatures should be at or around 40 degrees by Wednesday. Tuesday's morning temperatures had bottomed out at the 10 to 15 degree mark for most of the area (better than the predicted 5 degrees).

Still it will be the weekend before temperatures reach into the 60s.

To get to that point, and with rain or freezing rain expected late Tuesday, residents are urged to stay home as much as possible as roadways will continue to be treacherous.

Residents tired of waiting out the no-power life who tried to move to a local hotel Monday night found many of them already booked up. Grocery stores are operating on reduced hours again today.

The long road ahead.
Photo by Doogie Roux
KEEP THE HOUSTON PRESS FREE... Since we started the Houston Press, it has been defined as the free, independent voice of Houston, and we'd like to keep it that way. With local media under siege, it's more important than ever for us to rally support behind funding our local journalism. You can help by participating in our "I Support" program, allowing us to keep offering readers access to our incisive coverage of local news, food and culture with no paywalls.
Make a one-time donation today for as little as $1.