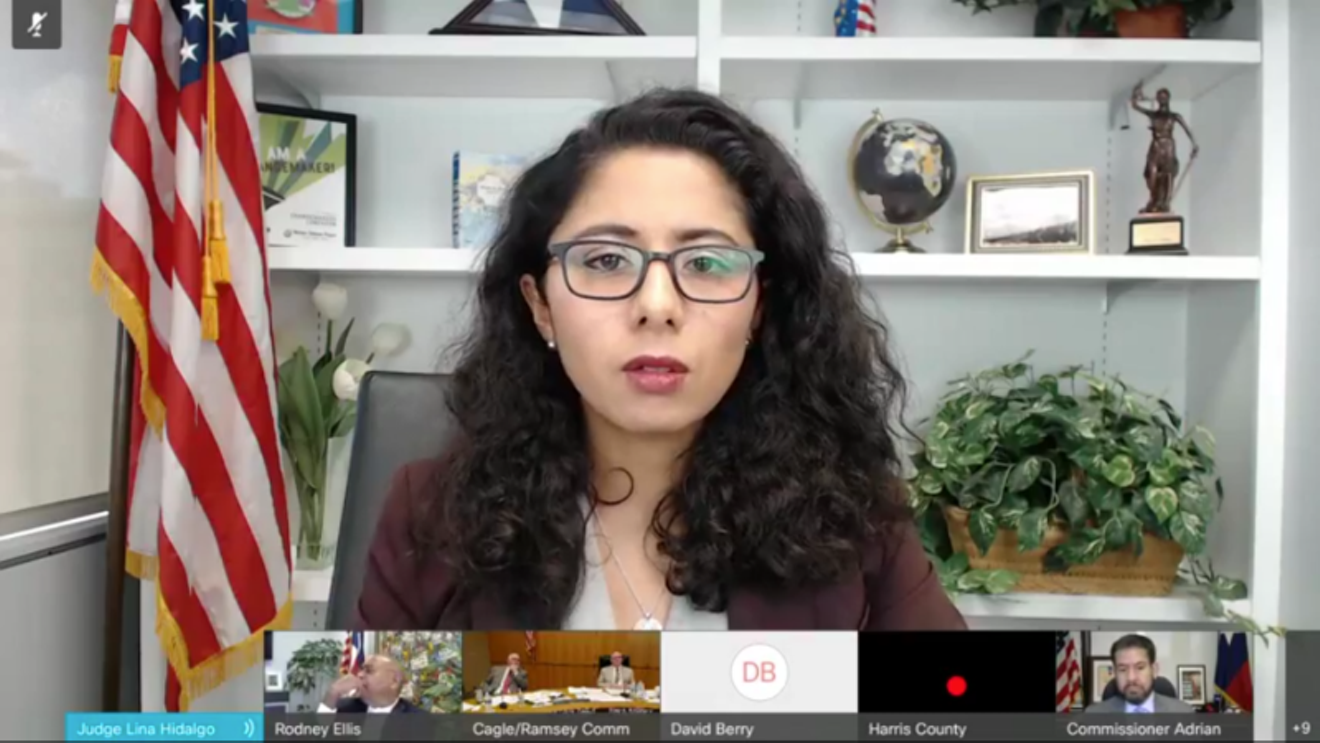 The Harris County Commissioners and County Judge Lina Hidalgo agreed they need to see more data before they increase juror pay. Screenshot
Harris County Commissioners Court decided not to vote on a proposed pay increase for county jurors during the court’s Tuesday meeting, and asked County District Clerk Marilyn Burgess’ team to come up with a new proposal that showed more proof that higher juror pay would increase Black and Hispanic jury participation as intended.

Burgess’ proposal called for increasing juror pay from $6 on the first day of jury duty to $50 and to bump the payment for additional days of service from $40 to $80. She also requested funding for free parking for jurors. If approved, that would have made Harris County jurors the highest paid in all of Texas, but Harris County Judge Lina Hidalgo and the rest of the court’s Democratic majority didn’t think the current proposal showed enough evidence that the pay hike would make county juries more diverse.

Burgess pointed to a survey her office commissioned that found county residents — Black and Hispanic residents in particular — claimed they’d be more likely to answer their calls for jury duty if pay was increased. But Hidalgo said she needed to see more data that proved higher juror pay would lead to greater racial diversity in county juries.

“That’s [only] one survey of Harris County, which is not clear to what extent the results are statistically significant, or to the extent the sample is representative,” she said.

Harris County Budget Officer David Berry also declined to support the proposed pay increase. “I’m not convinced at this point that this is the most cost-effective way to solve this problem,” he said Tuesday.

Hidalgo said she understands the need to do something to boost the county’s low jury appearance rates (which have hovered around 20 percent in recent years) and the importance of increasing the number of Black and Hispanic jurors on county juries, two groups that are much less likely to appear when summoned than white county residents.

Republican commissioners Jack Cagle and Tom Ramsey agreed that they wanted to see more data on how increasing juror pay would affect participation rates before voting on a pay increase, but Cagle said he wanted to hear more about other ways to address the issue like providing free METRO passes for jurors, and that he wasn’t convinced a pay increase was necessary.

To Burgess, the evidence seems clear. “Respectfully, I disagree with Commissioner Cagle,” she said. “For someone who is working paycheck to paycheck, they can’t afford to appear for jury duty now, and the only way that they’re going to be able to appear is if we adequately compensate them.”

Burgess told the court local judges her office reached out to support increasing juror pay, and that “community civic leaders say it’s the only way you’re going to get the lower socioeconomic people to appear for jury duty,” many of whom are county residents of color.

“We have discussed this for two years and now is the time to implement it,” she argued.

Hidalgo agreed that Harris County jurors should be paid more, but asked Burgess to collaborate with county budget officials and the county’s Justice Administration Department to come up with a revised plan within the next 30 days, and that Commissioners Court would then debate the issue again once a new proposal is presented.

“I want to support progress on this issue,” Hidalgo said. “I just want to look at it holistically,”
KEEP THE HOUSTON PRESS FREE... Since we started the Houston Press, it has been defined as the free, independent voice of Houston, and we'd like to keep it that way. With local media under siege, it's more important than ever for us to rally support behind funding our local journalism. You can help by participating in our "I Support" program, allowing us to keep offering readers access to our incisive coverage of local news, food and culture with no paywalls.
Make a one-time donation today for as little as $1.