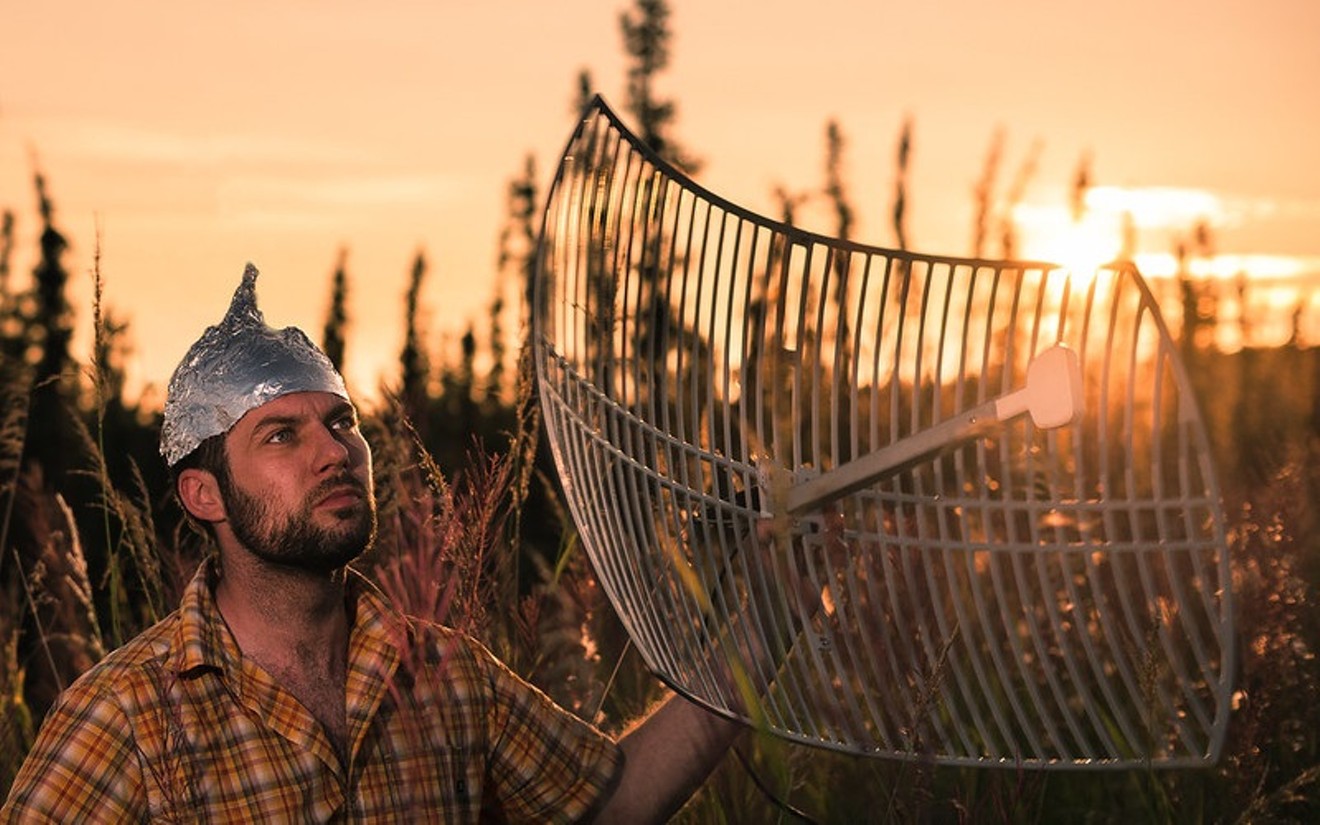 We laugh, but conspiracy theories are responsible for a lot of problems. Photo by Jason Ahrns/Flickr
Last week, I was invited to speak to a Houston area high school along with five other local horror authors. During the question and answer session, a student asked us what our favorite conspiracy theories were. Here is an extended answer to what I told them.

I don’t have a favorite conspiracy theory anymore. If you scratch any conspiracy theory deep enough, you will find Nazis 100 percent of the time. Even things that seem harmless, like Flat Earthers, often have deep ties to Christian nationalism. Denial of basic scientific tenets, such as the heliocentric model of the solar system and the existence of a globular Earth, fit hand in glove with the Flat Earth, and the spread of Flat Earth talking points serves very well for a recruitment tool to people open to dismissing other truths they find inconvenient.

Conspiracism isn’t just being wrong about something. It is about creating a mockery of the scientific method to remain wrong about it as an article of faith. Even though literally all of the Flat Earth evidence is rooted in ridiculous misunderstandings of basic principles, it feels like science, and it fuels the human need for discovery. Like putting artificial sweetener in a hummingbird feeder, the pageantry of conspiracy theory rhetoric gives the illusion of being full while starving the consumer of needed calories.

On top of that, most conspiracies require a cabal of sinister figures at the top, all of whom work in perfect tandem to enact a deadly agenda. This is the fabled Illuminati, though lately it’s more common to say the globalists, and more than half the time it’s all just code for the Jews. To fool an entire planet about the horizon would require an army of ruthless mind agents with enormous resources.

If they can do that, why is it so hard to believe they want to confiscate all guns, or turn everyone queer, or lock up all Christians? Once the enemy has been established as powerful enough to literally change the shape of the world, it’s only logical to assume they can take all your money and redistribute it. Then, when bad things happen in life, there is a handy scapegoat.

This is ironic because actual conspiracies do exist. The myth of Jewish world controlling overlords was itself a plot by the Russian secret police to discredit leftist movements during Tsarist rule. From there it spread to Central Europe, and we all know how that went.

America is full of conspiracies. There’s the CIA’s work in mind control, the Tuskegee Experiment, and the Business Plot where rich anti-Roosevelt industrialists literally tried to overthrow the government in a military coup. All of those things absolutely happened, and they required high level members of the elite to attempt them.

However, these conspiracy theories are long out of fashion because they point the finger at power structures that target the marginalized rather than a comforting lie about white patriarchal erasure. Things like MKULTRA only return to life when they can be used to demonize a socially progressive agenda, and Tuskegee gets resurrected whenever white Christians need a reason to avoid vaccination, which is sadly a new conservative bonafide.

I grew up in the ‘90s listening to Alex Jones on terrestrial radio. Back then, he seemed like harmless fun. Three decades later, that fun has helped birth attempted insurrections and a community that thinks urinating on the graves of children killed in school shootings is okay. How did we get here? By treating conspiracy theory mentality as an amusing novelty. There is nothing fun about ignoring the truth on purpose.
KEEP THE HOUSTON PRESS FREE... Since we started the Houston Press, it has been defined as the free, independent voice of Houston, and we'd like to keep it that way. With local media under siege, it's more important than ever for us to rally support behind funding our local journalism. You can help by participating in our "I Support" program, allowing us to keep offering readers access to our incisive coverage of local news, food and culture with no paywalls.
Make a one-time donation today for as little as $1.