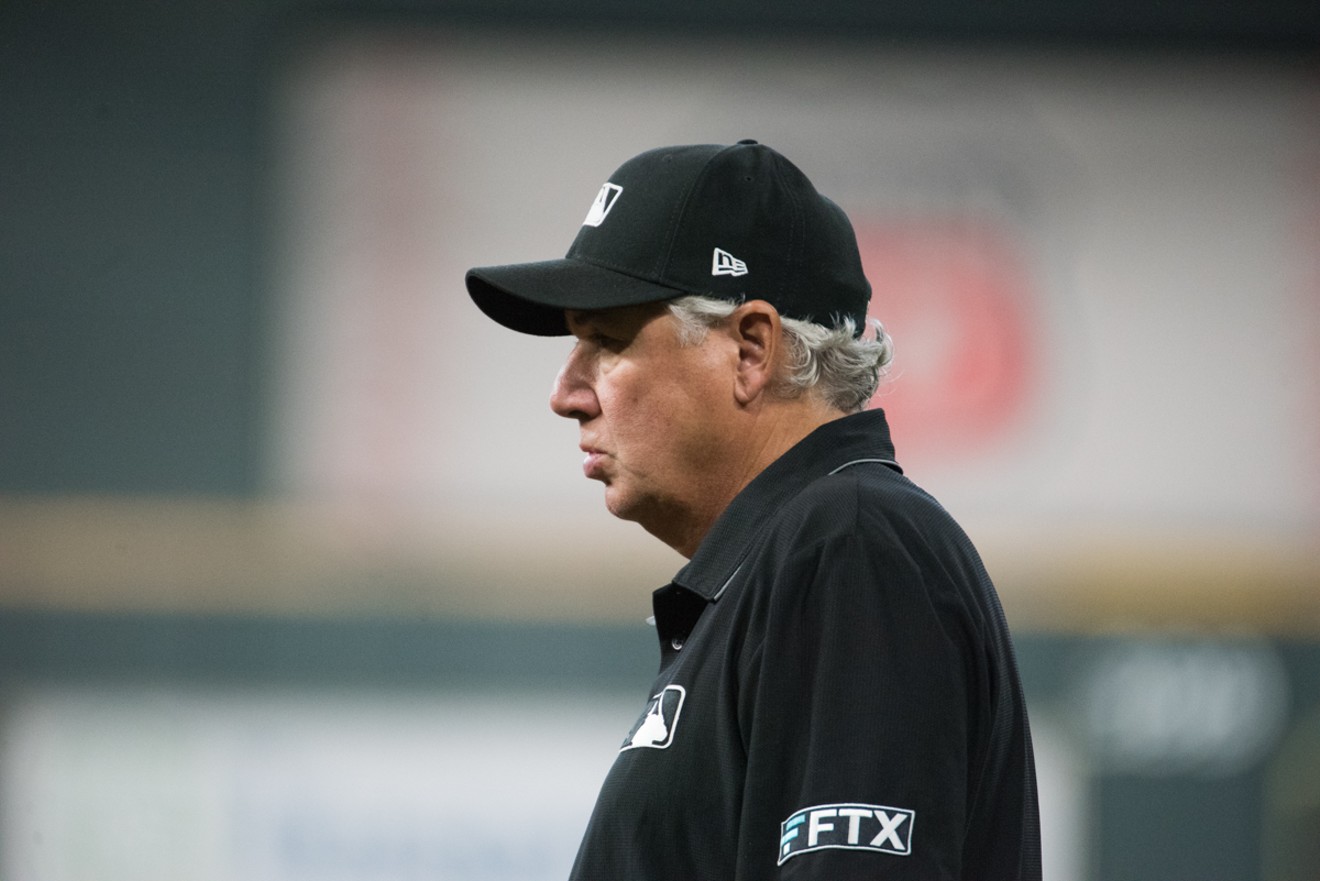 Why is umpire Tom Hallion here? It's complicated. Photo by Jack Gorman
The Astros had a chance to sweep the Chicago White Sox in game three of the ALDS in Chicago, but instead found themselves losing an incredibly long, poorly officiated 12-6 game with boatloads of controversy. Plate official Tom Hallion (pictured above in the midst of making another bad call, we assume) worked one of the most bizarre strike zones we can remember and the entire officiating crew blew a call in the fourth inning that led to an eventual blowout.

It was an incredibly frustrating game for fans and, no doubt, for the players, but it wasn't the only thing that contributed to a lopsided loss for the Astros. The bats were quiet after the first couple of innings and there were a number of questionable managerial decisions made. Overall, it was a bad night for the Astros, but they have two more chances to move on to the ALCS. Our thoughts...

Four-plus hours is a lot.

By 10 p.m., the game was only in the sixth inning, three hours after it began. That's too much, even for playoff games. For East Coast viewers, the game ended on Monday morning. That was partly because of all the hits and there were a ton of pitches thrown as evidenced by the high number of strikeouts, but for everything Major League Baseball has done to cut down on game times, it has not helped in the postseason.

The Astros struck out 15 times.

The White Sox had one of the best pitching staffs for strikeouts in baseball and the Astros were one of the teams that struck out the least. On Sunday, advantage White Sox. It could be argued — and certainly was by plenty of fans on Twitter — that the problem stemmed from a very poorly called game by Hallion, but Houston hitters swung at more than their fair share of pitches out of the zone. On the other hand, if you are Sox reliever Ryan Tepera, there is another reason: "They've had a reputation of doing some sketchy stuff over there. We can say it's a little bit of a difference. I think you saw the swings and misses tonight compared to the first two games at Minute Maid." Wow, way to win gracefully, Ryan.

Dusty Baker did not manage his best game.

It is rare that pitchers are pulled mid-batter without an injury, but that is what happened to Luis Garcia in the third inning when Baker pulled his starter with a 2-0 count on Leury García. It was pretty clear Baker waited to long to pull Garcia given the two-run homer he gave up earlier that inning, but then to bring in yet ANOTHER Garcia (Yimi, which made it Garcia pulled while facing Garcia in favor of reliever Garcia) who was not great against lefties. Baker's argument was that Yimi Garcia warmed up faster than Christian Javier, who was also in the pen, but neither pitched well against lefties and Leury García is a switch hitter. It was a terrible sequence for Baker who had a rough night all around, like his team.

This literally cost us 5 runs pic.twitter.com/FFhjNJalab

That blown call was bad, but the balls and strikes were worse.

Much has and will be made of the fourth inning when, with runners at the corners, Yasmani Grandal hit a soft grounder to first and ran on the grass inside the baseline as Yuli Gurriel attempted to throw home. The ball hit Grandal on the way to home plate and went wide of catcher Martin Maldonado, allowing a run to score. The Astros protested that Grandal interfered, but the rule states it must be intentional and the officiating crew did not believe it was. Regardless of whether they thought that was enough to be called intentional, Tom Hallion's strike zone, one of the worst in all of baseball this season, was just wacko.

In the third inning, Luis Garcia should have had a strike three call against Grandal. It was clearly in the zone. Instead, it was a ball and Grandal hit a two-run homer.

There were terrible strike-ball calls at the plate all night (so much so, the national announcers sounded pretty incredulous after every missed call), but most of the worst went against the Astros including a strikeout of Maldonado that should have put him on base with a walk. Later in the game, with Maldonado once again criticizing a call while catching and the Astros dugout going after Hallion, the ump put them on notice he'd heard enough. After the game, Maldonado said, "You know, I think it was a tough night for Tom." That's an understatement.
KEEP THE HOUSTON PRESS FREE... Since we started the Houston Press, it has been defined as the free, independent voice of Houston, and we'd like to keep it that way. With local media under siege, it's more important than ever for us to rally support behind funding our local journalism. You can help by participating in our "I Support" program, allowing us to keep offering readers access to our incisive coverage of local news, food and culture with no paywalls.
Make a one-time donation today for as little as $1.