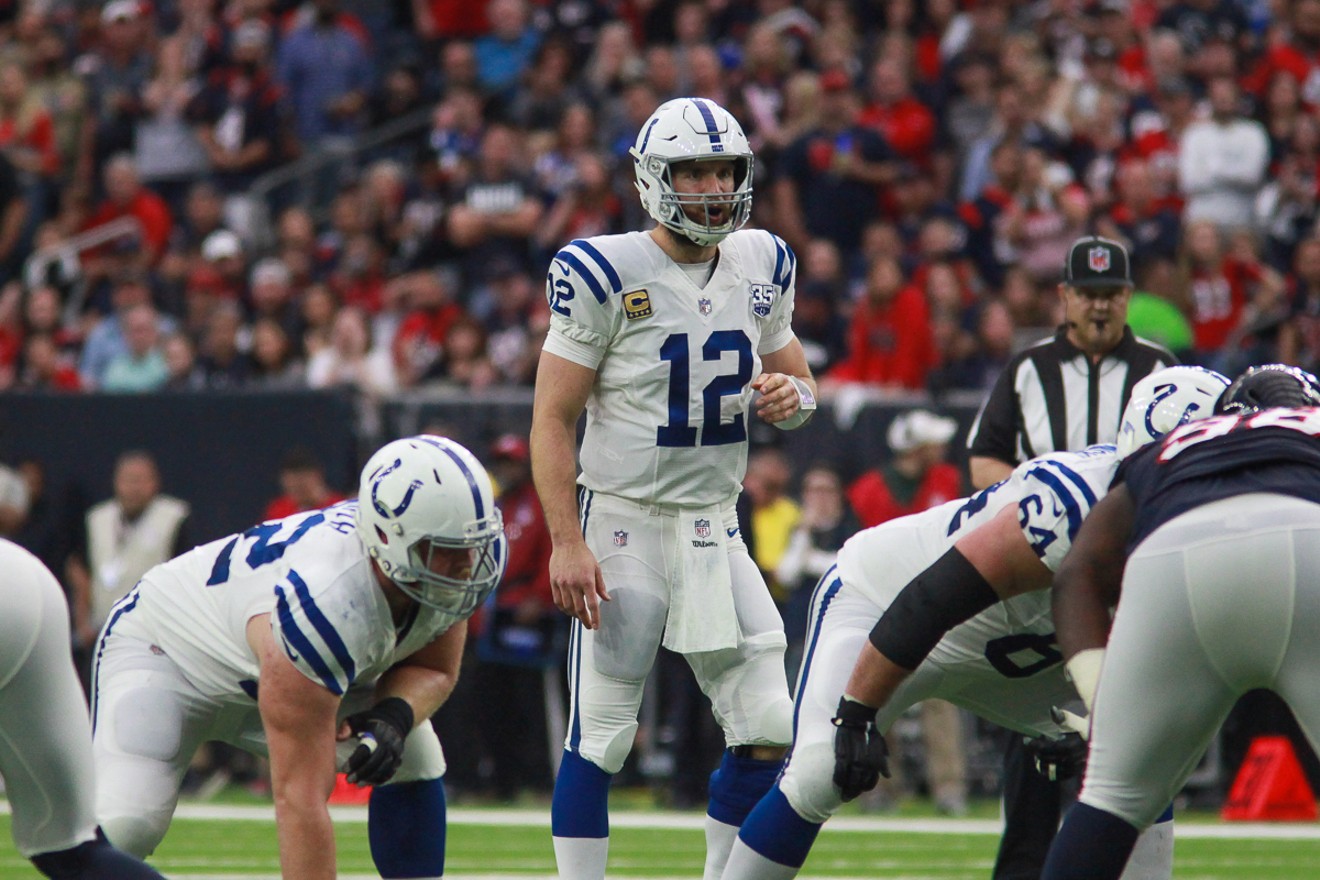 It was not a great weekend for Andrew Luck, but it was a great season. Photo by Eric Sauseda
I think it's safe to say that the Cowboys and the Colts are the two teams that Houston Texan fans hate the most. If they're not THE top two, then they are two of the top four or five, at worst. So, in my four decades of watching NFL football, particularly NFL postseason football, I don't know that I've ever felt any dirtier than I did on Saturday.

Here's why — I spent the day forcing myself to root for both of those sad sack of dog poop franchises, as I had each of them as two of my best bets for the weekend, the Colts at +5.5 against the Chiefs, and the Cowboys at +7 against the Rams. I would have felt dirty even if I WON those two bets, although I'd have probably gotten over it with a shower.

However, the fact that I had to spend seven hours of my Saturday rooting for both of those teams while not only losing my bets, but not even really covering the spread for any length of time in either game all day long... well, that just murdered my soul.

Seriously, you know who had a better day than I did on Saturday? This little girl....


This dog brought the BOOM STICKpic.twitter.com/RFDanPxqSv


And this Chicago security guy....


So, as I sit here and judge the winners and losers from this weekend, just know that all of the losers below pale in comparison to me, for I am Sean Pendergast, Lord of the Losers! OK, let's take a look at the weekend....

4. Andy Reid
I'll admit it, I was one of those with the squarish "Andy Reid in the playoffs" handicap on that Chiefs-Colts game on Saturday. Going into that game, he was 1-6 in his last seven playoff games, with the only win being the 30-0 trouncing of Brian Hoyer and the Texans in 2015 (which barely counts, similar to Bill O'Brien beating the Raiders with Connor Cook at quarterback in 2016). On Saturday, Reid's offense ran 78 plays (45 passes, 33 runs), and had a 100 yard rusher (Damien Williams) and a 100 yard receiver (Travis Kelce). Reid killed the Colts' defense in the screen game and short passing game, and unleashed Tyreek Hill early with a 36-yard reverse for a touchdown to put double digit margin between the two teams for good. If there was any aspect of this game that made me feel worse about the Texans, it was the methodical way in which the Chiefs dissected the Colts defense in the first half, a defense that held the Texans to seven points ten days ago.

3. C.J. Anderson
If the Chiefs made me feel queasy about the Texans, then the Rams made me feel like the Texans aren't playing the game on the right planet. All Sean McVay's team did on Saturday night was shred a pretty good Dallas defense (5th in rush defense DVOA) for 273 rushing yards on 48 carries. They had two running backs go for over 100 yards, and oddly enough, the more prolific of the two was not MVP candidate RB Todd Gurley (although he was good, 16 carries, 115 yards, 1 TD), but instead was C.J. Anderson, who looked like he just left an In-n-Out Burger binge, but still ran for 123 yards on 23 carries, and two touchdowns. Anderson was on his third team in the last two months, and he looked HEAVY as hell. Like literally, he looked fat. However, one way to keep Jared Goff's shaky in-game demeanor out of the mix is to run the ball 45 times. THAT'S what makes Sean McVay so good — not that he is able to scheme some sort of high flying passing game, but that he adjusts to his personnel situationally and is able to completely flummox the opposition.

2. Attorneys
If we are to believe Adam Schefter's story on ESPN.com on Sunday (and I see no reason not to) that the contracts for all of these new head coaches have language that protects the teams, to some degree, should there be a work stoppage in 2021, then it's safe to assume there's probably going to be some form of a work stoppage in 2021. Here is more, courtesy of ESPN.com:

Teams are trying to protect themselves and save money in the event of missed time, using different percentages for amounts of the football season that could be missed in 2021.

One league source told ESPN that he thought both teams and coaches are confident that there will be some type of disruption, and one of the first signs of it is showing up in the language of coaches' contracts.

You can see this one coming from a mile away. The financial issues which are the normal lighter fluid for a standoff like this are exacerbated by further contention over Roger Goodell's owning player discipline, as well as issues of the player safety variety — guaranteed money, 18-game schedule, concussions, caring for retired players, etc. The only winners in all of this, as usual, will be the attorneys, who will make out like bandits.

1. These zombie Patriots
It's crazy to think that in Week 16 of this regular season, the Houston Texans owned the second seed in the AFC, and controlled their own destiny for a first round bye in the AFC. We see after this past weekend (and really after LAST weekend, given how bad a matchup the 6-seed Colts were for the Texans) how crucial that advantage is. Back to the Texans and Patriots for a second — what's strangest about the Texans holding a standings advantage THAT late in the season over the Patriots is that we now see, after the past two weekends, the gigantic chasm that exists between the Texans and a team like the Patriots. The Texans looked totally overwhelmed, at home last weekend, against the 6-seed. The Patriots, on the other hand, yesterday, surgically dismantled a 12-4 team that people were touting as a dark horse Super Bowl contender. I'm sure there will be many people who will say that this coming weekend will signal the end of the Pats dynasty. How many times do we need to do this before we realize that Brady and Belichick will die when they choose to die?

4. Dak Prescott's big contract
I was a big fan of Dak Prescott coming out of Mississippi State. If you Google hard enough, I'm sure you can find where I said the Texans should have drafted him, even AFTER they signed Brock Osweiler in 2016. I think, for a fourth round pick, Prescott has been an undoubted success story, but at some point, it you're going to marry a quarterback, it needs to be someone who can win you a Super Bowl. After a rookie year where he went 13-3 in the regular season and all indications were he COULD be THAT GUY, Prescott has regressed in Years 2 and 3. His winning performance against Seattle a week ago had people ready to give him a big extension this off-season, but his performance on Saturday night in LA put us right back to "What do the Cowboys do with him?" With a year left on his rookie deal, this would be the off-season to extend Prescott if it were a no brainer, but it's not. If you polled GM's around the league right now, most of them are probably hoping the Cowboys commit big to Prescott, as he gives off more of an Andy Dalton "good is the enemy of great" vibe right now than anything else.

3. Eric Ebron
Yeah, Ebron was a great red zone target for Andrew Luck this season, leading all tight ends with 13 touchdowns, and the fact that he was far more "bust" than "boom" during his rookie contract years in Detroit probably made this season feel like a renaissance in Indy for the fifth year tight end. However, dropped passes have been an issue all season long (he led all tight ends in THAT stat, as well), and they were on Saturday, too. The Colts didn't convert a third down the entire GAME (0-9... how's that feel, Texan fans?), but could have converted one in the first MINUTE of the game if Ebron had just held onto a simple dump pass. Instead, he dropped it, the Colts had to punt, and five plays later, it was 7-0 Chiefs. Ebron's gaudy touchdown numbers mask the fact that there's still a lot of "BUST" floating around inside this version of Ebron.

2. All 15 Charger fans
They really had us believing, didn't they? The Los Angeles Chargers went 12-4 during the regular season, lost the AFC West due to a tiebreaker, and were maybe the most balanced team n the NFL coming into the postseason (3rd in offensive DVOA, 8th in defensive DVOA). So, of course, the Patriots murdered the Chargers in cold blood by a score of 41-28, in a game that wasn't even really THAT close. It's a shame, really. All 15 of those diehard Charger fans out there must really be miffed!

1. "Defense Wins Championships" Guy
There's nothing more annoying than people, especially media people who are supposed to be paid to do the work, who lazily spew cliches to try to pawn it off as some sort of analysis. No cliche has gotten more run in NFL history than "defense wins championships." Sadly, many average fans out there will accept that as some sort of savvy discovery of football plutonium. I mean, yes, you'd rather have a good defense than a bad defense, but IS that what wins? All indications in 2018 would be "No, not really." According to Football Outsiders DVOA metric, here are the final regular season rankings of the offenses and defenses that played this weekend:

So the top five offenses were all playing this weekend, and NONE of the top seven defenses were. It's easy to see why six of the eight new head coaching hires come from the offensive side of the ball, most of them with either (a) some sort of QB guru reputation, (b) some sort of tie to Sean McVay, or (c) both. These are CRISIS TIMES for "Build Through The Defense" Guy and "Defense Wins Championships" Guy! CRISIS!