Former Astro Keuchel on Former GM Jeff Luhnow: "We Never Got Along" 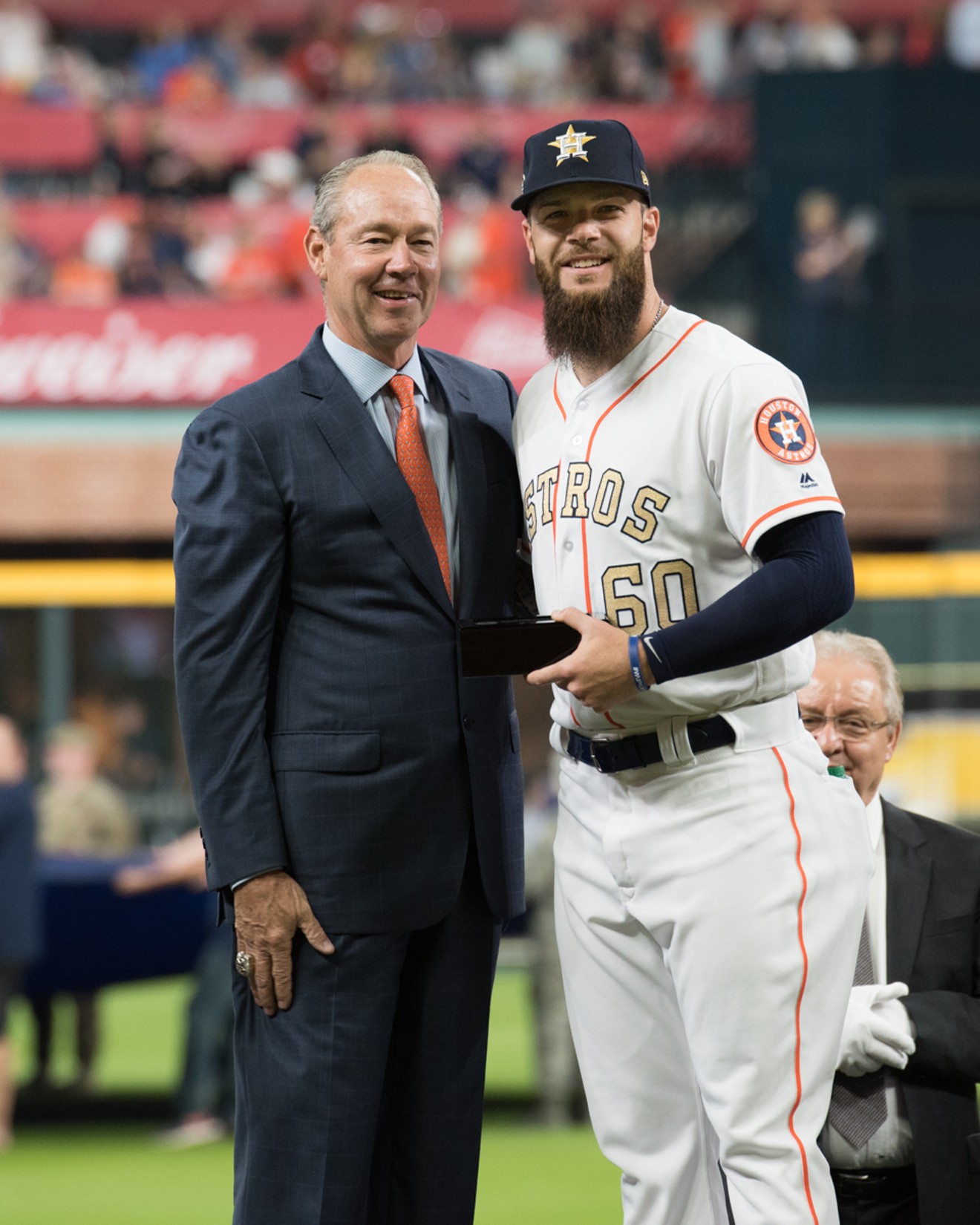 Dallas Keuchel in some happier days as a frontline guy for the Astros. Photo by Jack Gorman
The Astros just finished navigating one of the tougher patches of the 2021 schedule over the last three weeks, posting a record of 11-7 against likely teams like the Dodgers, Padres, and Red Sox (among others). Starting Tuesday night, they play a significantly easier stretch of 20 games, with the only really challenging opponent being the Chicago White Sox, who come to Minute Maid for four games this weekend, starting tomorrow night.

The White Sox rotation includes one of the heroes of the Astros' 2017 title run, 2015 Cy Young Award winner Dallas Kuechel. It's been a few years since Keuchel played in front of a crowd at Minute Maid Park. The last time he did, he was wearing an Astros uniform. I would imagine he will get a warm reception when he steps on the mound Sunday afternoon to face Lance McCullers and a few of his former teammates.

However, thanks to Scott Merkin, who covers the White Sox for MLB.com, we learned that not all of Keuchel's memories from Houston are all that fond. Evidently, Keuchel still harbors great resentment for the former general manager of the Astros, Jeff Luhnow, who was fired in January 2020, in the wake of Major League Baseball's punishment of the Astros for sign stealing during that 2017 championship season.

Here is what, according to Merkin, Keuchel had to say about his return to Houston this weekend, and Luhnow:

"Luhnow's not there anymore, so I don't have anybody to dislike. We never got along, no bones about it. But I like everybody else over there, so it's going to be weird.

"I don't know if it's really going to register with me until in the moment or afterwards. It's really a place I never thought I was going to leave. In all honesty, I have a lot of guys over there I have big-time admiration for, still, and I have a lot of contact with."

Keuchel having issues with Luhnow is actually understandable. Of course, there was the July 31 trade deadline in 2017, when the date came and went without the Astros making a big trade to try to go balls-to-the-wall after a championship. Keuchel was publicly VERY critical of Luhnow for sitting on his hands, hoping that the Astros GM would go after someone like Justin Verlander.

As it turned out, because of the August 31 waiver-trade deadline a month later (where players could still be traded, but had to pass through waivers first), Luhnow got a mulligan, traded for Verlander (ironically, with a major assist in the form of a last minute sales pitch by Keuchel), and the rest is history.

That was a specific instance of vitriol from Keuchel toward Luhnow that was ultimately remedied. More likely, the lingering ill will from Keuchel stems from feeling jilted in contract negotiations following the 2018 season, when Keuchel entered free agency. Keuchel had reportedly turned down a five-year, $90 million offer during the 2016 season (one year removed from winning the AL Cy Young Award), but after a pedestrian 2018 season (12-11, 3.74 ERA), the Astros didn't make what Keuchel felt was a suitable offer.

As it turned out, MLB as a whole wasn't seeing the same price for Keuchel's services as Keuchel was, as he sat on the open market until June, before signing with the Braves for one year, $13 million. He went 8-8, with a 3.75 ERA in 2019, before signing a three year, $55.5 million deal with the White Sox leading into the 2020 season.

So for Keuchel, it's really "all's well that ends well." He's gotten most of the money back that he left on the table in 2016, and Luhnow is still excommunicated from baseball, as he has blamed everyone BUT himself for the scandal that has sullied the Astros' only World Series title. It's just too bad Luhnow had to get himself canned. Having him around for Keuchel's return would have been a fun wrinkle to what should already be a great series this weekend.