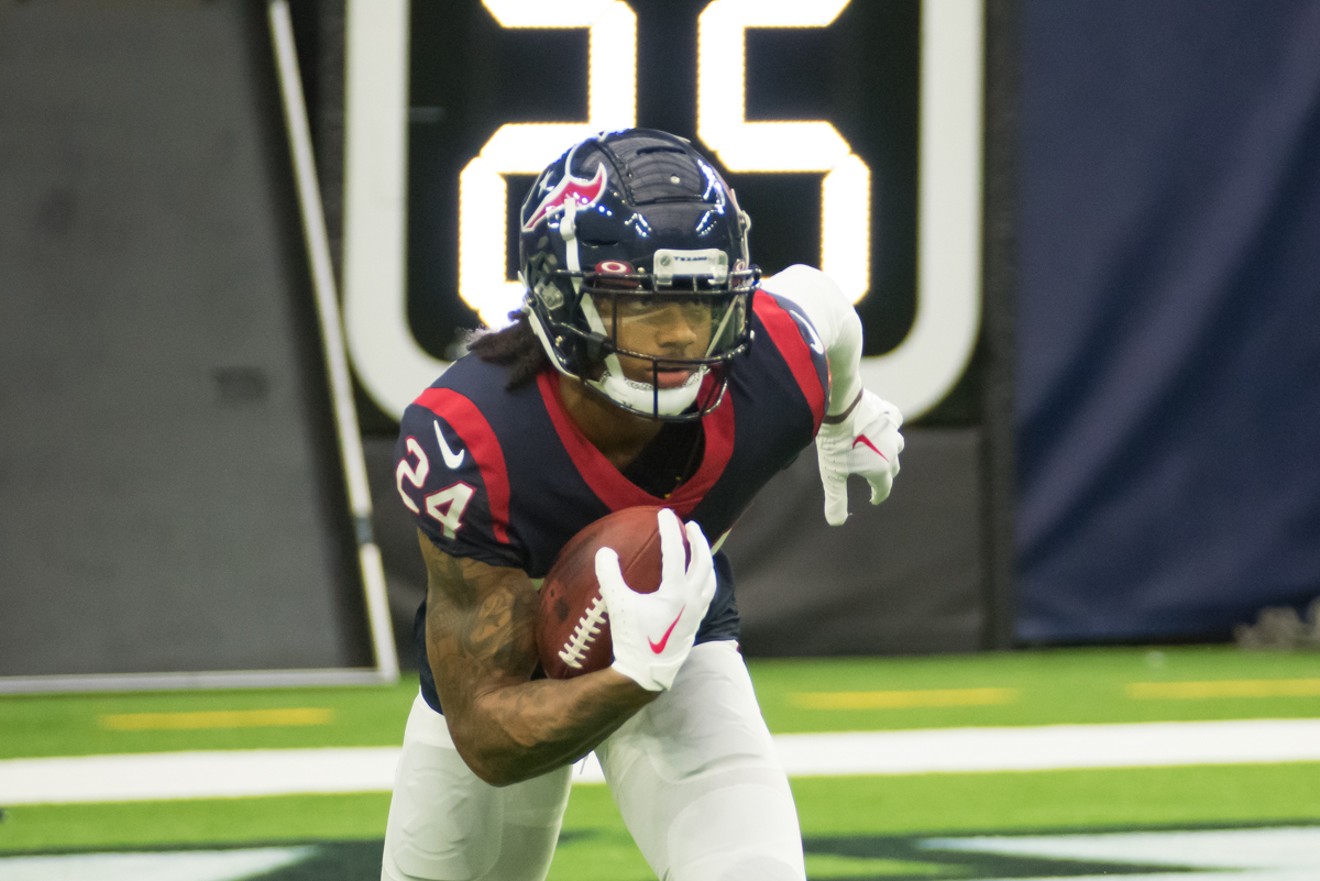 Texans' first round pick Derek Stingley, Jr. is now on the hallowed list of Infamous Houston Hamstrings. Photo by Jack Gorman
We've seen hundreds of athletes come and go in our time here in Houston. Some have been native Houstonians, some have been from the state of Texas, and many others are from various corners of the country and the globe. Indoctrination into being a TRUE Houston athlete can come in multiple ways — merchandise sales, commercial appeal, simple cheering from the crowd.

For me, though, at least over the last decade, you don't become a true Houston icon until you've somehow jacked up your hamstrings! Indeed, our fair city has become the place where athletes' hamstrings go to die, or at least get stretched very, VERY uncomfortably. The latest infamous hamstring to rag doll the psyche of our city's diehard sports fans is that of Texans rookie CB Derek Stingley, Jr., who missed the loss to the Commanders this past Sunday with a hamstring ailment of some sort.

It's okay, young Sting! While it may depress you to miss out on another 80 snaps defensively and an opportunity to intercept a Taylor Heinicke pass or two, your hamstring woes put you with some fine Houston athletic company, including some true legends!

So, without further ado, here is the Hall of Houston Hamstring Infamy from the last decade or so:

ARIAN FOSTER, early portion of 2011 season (and other seasons)
Foster's is the O.G. of hamstring ailments. After making it through the entirety of his first full season in the NFL in 2010 playing in every game, Foster opened the 2011 season on the shelf with a hamstring injury that sidelined him for the first three games. The highlight of this stint on the sidelines was Foster famously tweeting out a picture of his hammy MRI (which appears to be scrubbed from the internet, but the original text of the tweet still exists):


This is an MRI of my hamstring, The white stuff surrounding the muscle is known in the medical world as anti-awesom... http://t.co/6tXHNkW

Foster would go on to do two things in his Texans career — (1) have some of the most scintillating and memorable moments of any Texans player in team history, and (2) become the poster child for soft tissue injuries.

JAMES HARDEN, early 2018
2018 is when business really picked up in the "hamstring injury" department. In January 2018, James Harden, who for all his faults requires a bulldozer to get him off the floor, suffered a hamstring injury that knocked him out for a few weeks, his longest injured stint as a Rocket. Thankfully, that 2017-2018 team had traded for Chris Paul a few months prior, so the road to a 65-17 record remained intact with an All Star in Paul to lead the show, until.....

CHRIS PAUL, 2018 NBA Playoffs
.... the playoffs rolled around, and Paul tragically pulled a hamstring at the end of a Game 5 win over the Golden State Warriors. That win put the Rockets up 3-2 in the Western Conference Finals, but without Paul, the Rockets were missing the x-factor that took them from good to great that season. It also didn't help that they missed 27 straight three pointers in Game 7. TWENTY SEVEN! Let's move on.

KEKE COUTEE, Texans training camp in 2018
Ah, now football gets into the mix! Keke Coutee was a fourth round pick in the 2018 draft, a diminutive, but promising rookie wide receiver. However, in training camp, Coutee suffered a hamstring injury and could never get out of Bill O'Brien's doghouse. He actually had one of the best debuts in team history in Week 4 of 2018, with 11 catches against the Indianapolis Colts, but he would get injured again, and the remainder of his Texans career was star crossed, to say the least. (Ironically, Coutee is now an Indianapolis Colt!)

WILL FULLER, multiple times but mainly 2019-2020
Fuller was a first round pick in 2016 out of Notre Dame, who was probably best known for two things — (10 being the x-factor that, when healthy, unlocked a level of Deshaun Watson that could normally only be created in a video game, and (2) having an injury history that would make the red-nosed naked guy on the Operation board game blush. Fuller pulled a hamstring in October 2019, then again in September 2020. By the time 2021 rolled around, Bill O'Brien was gone, Nick Caserio let him walk, and Fuller recently retired to work in the creative side of the video gaming industry.

ALEX BREGMAN, 2020 and 2021
Baseball's turn! Alex Bregman had a Will Fuller-esque period following his MVP runner up season in 2019. If you Google "Alex Bregman hamstring" it pulls up articles that have dates ranging from August 20, 2020, to spring training of 2021, to his rehab stint with Sugar Land in August 2021. Bregman reworked his regimen prior to the 2022 season to make sure that the hammies would work always and forever, and the result was a return (almost) to All Star form in 2022, and a stellar 2022 postseason.

JOSE ALTUVE, April 2022
Altuve wound up having an MVP conversation type season in 2022 (finished 5th in the balloting), with a batting average of .300 and an OPS of over .900, but it didn't start that way. In April of this year, Altuve went on the 10 day DL with a hamstring strain. Obviously, he got over it, but with Altuve now in his early 30s, it was a somewhat harrowing experience for Astro fans.

So see, Sting? I count at least three Hall of Famers on that list, so fear not! That gimpy hamstring of yours has you hobnobbing with Houston sports aristocracy.