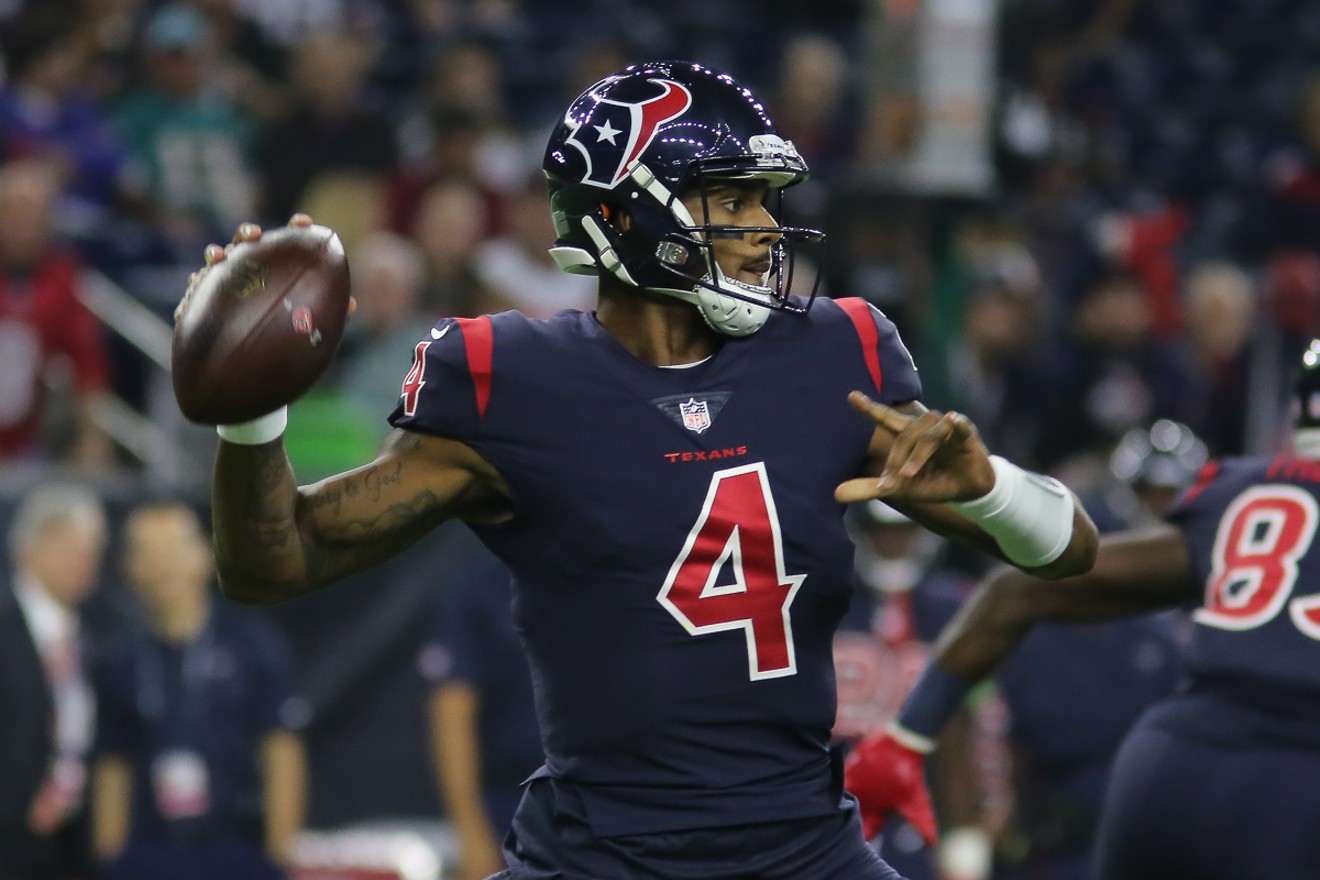 Deshaun Watson has reportedly added two teams to his preferred list of trade destinations. Photo by Eric Sauseda
For the second year in a row, Houston Texan fans will be spending their spare time concocting hypothetical trades involving Deshaun Watson. This time a year ago, the belief was that the team would either hold firm with Watson and force him to play here in 2021, or trade him for a king's ransom. Then, along came 22 civil lawsuits, and everything came to a screeching halt.

Watson sat on the Texans' roster with his $10.5 million salary, getting paid to (presumably) work out and stay the hell out of the way. This season, his salary increases to $35 million, but the lawsuits remain unsettled. Until they get settled, or there is some other positive resolution to everything from Watson's standpoint, the Texans are stuck with Watson.

This, though, will NOT stop the "hypothetical trade machine" that is sports talk radio and online outlets like this one. Imagining trades for Watson is what fuels this genre, and thus, I will not let that sweet bit of distraction die.

We don't know much about what Watson is thinking, at this point, largely because (a) his camp has publicly said very little, especially since the lawsuits began flying, and (b) Watson himself has said NOTHING publicly since January 4, 2021, at his press conference there day after the conclusion of the 2020 season. Well, he did say THIS publicly back in August, I suppose:
Other than finding out that the usually gleeful Watson actually does have a surly side, we didn't learn much from the little snippet, I suppose. So without Watson or his camp commenting, we are left to piece things together through the rumor mill, which cranked out one of the juicier rumors in a while earlier this week. Courtesy fo Jeremy Fowler of ESPN.com:


The Texans quarterback, who spent the 2021 season on the team’s active roster but did not play, has begun evaluating potential fits for his services in 2022, with the Buccaneers and Vikings among teams on his radar.

One source noted that Watson — who has a no-trade clause — is still early in the evaluation process, but he’s looking for the right blend of offensive system, coaching, talent and, most importantly, the chance to win.


Now, these are two intriguing trade partners for the Texans, if for no other reason than they are brand new to the Watson rumor mill. I feel every Watson trade post I've done here for the last 12 months has involved some permutation of the Panthers, Dolphins, Eagles, and Broncos, with a smattering of Jets and 49ers before the lawsuits started.

Let's look at each of these under the reported Watson microscope:

TAMPA BAY BUCCANEERS (13-4 in 2021, 27th overall pick in NFL Draft)
OFFENSIVE SYSTEM: Bruce Arians has had great success with his system with Ben Roethlisberger, Andrew Luck, Carson Palmer, and Tom Brady, so I am guessing Deshaun Watson would be just fine.
COACHING: Arians is back, and the team returns both of its coordinators, Byron Leftwich (OC) and Todd Bowles (DC).
TALENT: They were able to bring back all 22 starters from the team that won the Super Bowl in 2020. That's probably unlikely this time around, but there are still plenty of pieces on offense and defense to win big with Watson.
CHANCE TO WIN: In two seasons with Tom Brady, the Bucs won a Super Bowl, and lost in the playoffs to the eventual champs on a last second field goal. Watson would make the Buccaneers one of the five best teams on the odds board in Vegas.

MINNESOTA VIKINGS (8-9 in 2021, 12th overall pick in the NFL Draft)
OFFENSIVE SYSTEM: New head coach Kevin O'Connell was the offensive coordinator for Sean McVay and the Rams last season, so I'm guessing he will run some version of the Kubiak zone blocking/play action  scheme, which should terrify Viking opponents, if Watson goes here.
COACHING: O'Connell is a rookie head coach, but having come from the highly successful McVay coaching tree, I'm guessing Watson is fine with this.
TALENT: On the offensive side of the football, start with WR Justin Jefferson, WR Adam Thielen and RB Dalvin Cook. The defense is middle of the pack, and getting older. They'd need a few upgrades on that side of the ball.
CHANCE TO WIN: The Vikings went 8-9 with Kirk Cousins at QB. If Aaron Rodgers gets moved out of Green Bay, the Vikings likely become the division favorite, even with Cousins as their QB. With Watson in Minnesota, and Rodgers gone, they would be a heavy favorite to win the NFC North.