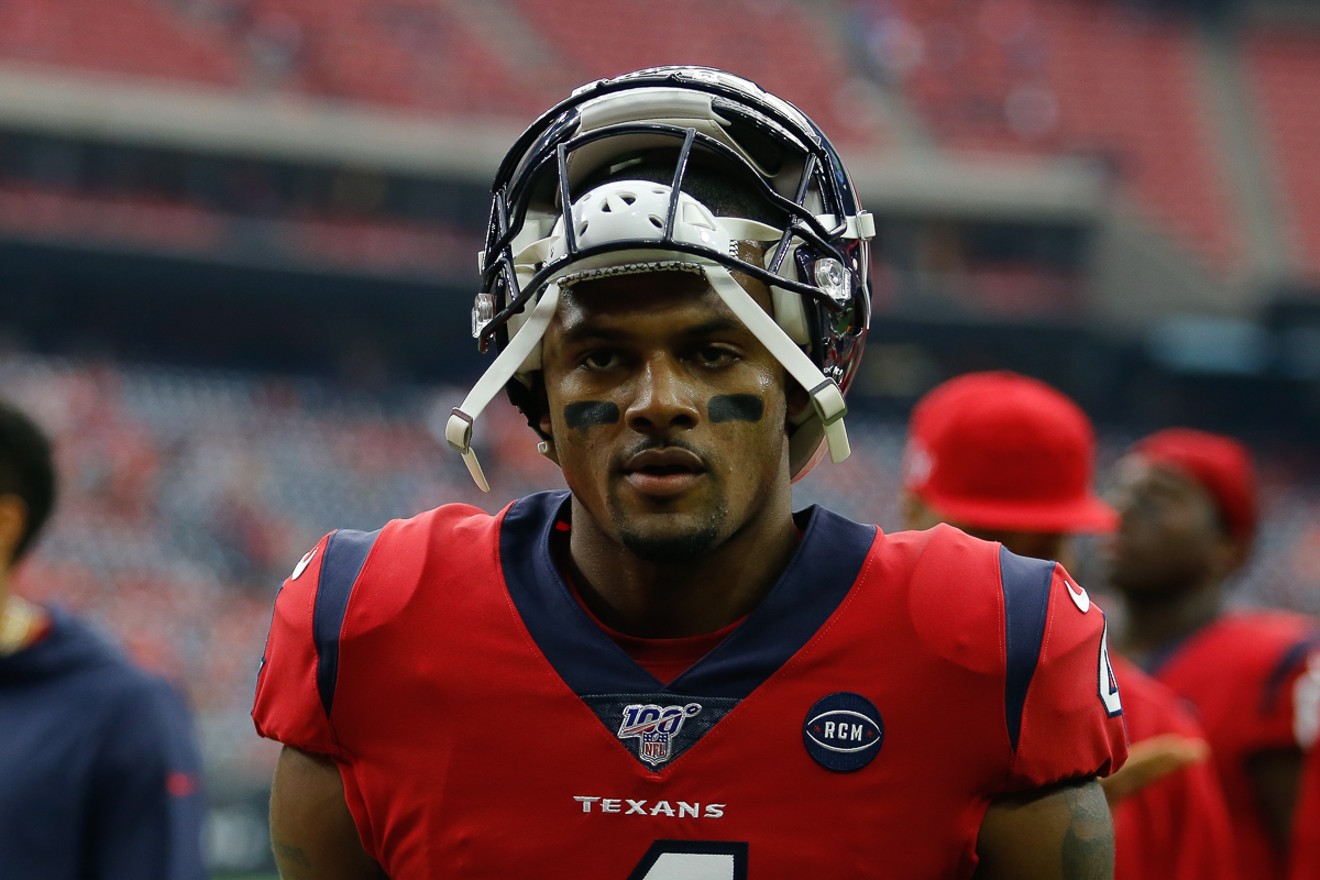 Deshaun Watson is now facing another lawsuit, the 23rd filed against him. Photo by Eric Sauseda
As the NFL is in the midst of reportedly winding down its investigation of Cleveland Browns (and former Houston Texans) quarterback Deshaun Watson, another woman has filed a civil lawsuit against Watson in Harris County, the 23rd in all, alleging similar accusations of sexual misconduct in a massage setting as the other 22 plaintiffs, all represented by local Houston attorney Tony Buzbee.

Courtesy of Sarah Barshop of ESPN.com:


Another lawsuit has been filed against Deshaun Watson. There are now 23 active civil lawsuits filed against the QB. According to the petition, the plaintiff “changed her mind about filing a lawsuit after watching the HBO Real Sports piece” that aired last Tuesday.

In this most recent civil case against Watson, the lawsuit states that the plaintiff had three massage sessions with Watson, with the first occurring in the summer of 2020. The plaintiff, a woman by the name of  Nia Smith, says that Watson's "behavior grew worse" with each session, and in the third and final session, Watson exposed himself to her, touched her between the legs, and "repeatedly requested" she have sex with him.

According to the lawsuit, Smith changed her mind about filing a lawsuit against Watson after watching last week's episode of HBO's Real Sports with Bryant Gumbel. Smith was impressed by the courage of Watson's accusers who were interviewed for that piece, and was offended by Watson showing little to no contrition in his press conference after being traded to the Browns.

The lawsuit states, "In that piece, plaintiff was struck by the courage of the victims willing to step forward and speak and was extremely displeased by Watson and his legal team's mistreatment and revictimization of the plaintiffs. But it was Watson himself claiming that even now he has 'no regrets' and has done nothing wrong that solidified her resolve. She brings this case seeking minimum compensation, but to obtain a court finding that Watson's conduct was wrong."


Deshaun Watson vehemently denies the allegations, just as he has since she first discussed them with members of our firm in March of last year. She repeated the allegations on social media in August and he denied them then. The only thing new about her contentions is the embellishment making them more extreme than prior versions. Deshaun’s denial remains the same.

The two highly respected lawyers from our firm, Letitia Quinones and Rachel Lewis, also vehemently deny there was any coercion or intimidation involved in the very cordial meeting at Vic and Anthony’s (Mr. Buzbee and the plaintiff are not even right about where the meeting was, much less what was said). They met her to see if she was one of Mr. Buzbee’s then still anonymous plaintiffs. At that time Mr. Buzbee refused to identify his clients. The suggestion that either of these two accomplished lawyers would have said “us black women must stick together” is absurd. The interview was so congenial, she joined the lawyers for dinner afterwards.

We are aware that more than a year ago she had other lawyers representing her and they ultimately terminated the representation. This plaintiff has long had a vendetta against Deshaun since she jealously and angrily published Deshaun’s personal data on social media in November 2020. In filing her lawsuit now she was obviously not influenced by recent developments. We are not surprised Mr. Buzbee was willing to say just about anything to get more publicity. He knows the NFL continues to investigate these cases, and this is a transparent attempt to further punish the man he sees as a potential payday.

Oh, one other thing — apparently, there is a 24th lawsuit coming soon:


Tony Buzbee, the attorney for the 23 women filing lawsuits, says that a 24th lawsuit against the #Browns QB is coming as well. https://t.co/owoYYG1uER

I have no idea how any of this impacts the league's investigation into Watson, and the degree to which they intend to punish him, if they indeed they even plan on punishing him. I do know that this is the world the Cleveland Browns and whatever portion of their fan base that supports Deshaun Watson now lives in — waiting for the other shoe to drop, ALL THE TIME. It could be tomorrow, next month, next year, or maybe never, but other accusers waiting to sue will always feel like they are lurking around the corner.

Have fun with that, Cleveland.