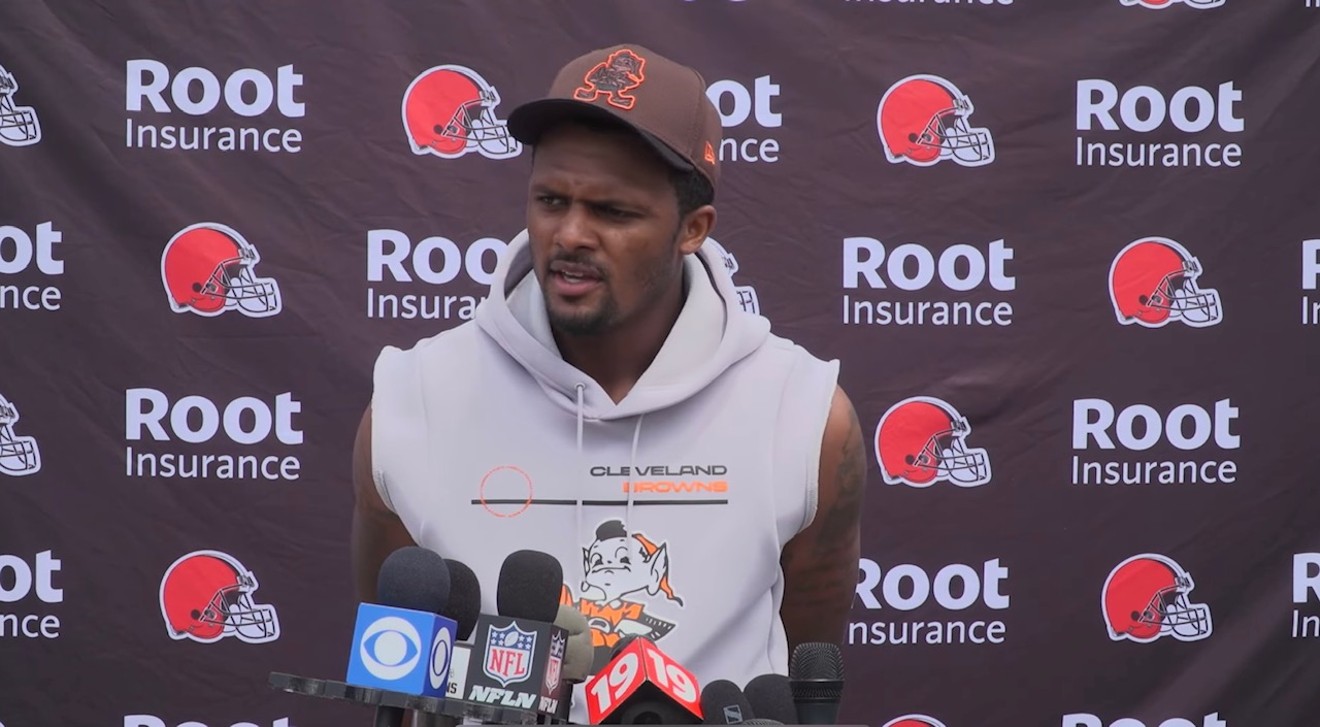 Deshaun Watson returns to NRG Stadium for the first time since being traded in March. Screen grab from YouTube
Through the months March through June, we remember all the key dates that lead up to this Sunday afternoon. We remember the middle of March, when a grand jury coming back with a "no bill" on Deshaun Watson criminal charges opened up a free-for-all among QB-thirsty NFL teams. We remember a week after that grand jury's decision, when the Cleveland Browns came out of nowhere to land Watson's services. We remember the two awkwardly terrible press conferences Watson has given, one after he signed a record breaking contract extension in March, and one after his 11 game suspension was finalized in June.

The suspension is over, and conveniently enough, Watson's first NFL action as anything OTHER than a Houston Texans will take place AGAINST the Houston Texans. When you assemble the whole Watson saga in totality, the game itself on Sunday is one of the less compelling aspects of the day. How will the crowd treat Watson? How will his former teammates treat him? And how about Tony Buzbee bringing ten of Watson's accusers to the game?

The soap opera reaches its crescendo Sunday morning. Here are four things to watch for (only one of which is Watson-related):

4. First half follies
If you're looking for the biggest reason that Lovie Smith might be the second consecutive Texans head coach to be done after one year at the helm, aside from he regression of young players, look no further than the offense's complete and utter failure, at near historic levels, in the first half of games. Over the last five games, in four of them — versus the Titans, at the Giants, versus the Commanders, and at Miami — they've averaged 40 yards of offense in the first half, including a five yard performance against Washington. FIVE YARDS. IN A HALF. The rub here is that these teams don't play defense at an elite level (average ranking on Football Outsiders, 18th). On top of that, the yards piled up in the second half of these games come largely from the opponent getting bored with big leads. A strong first half on Sunday would be nice, so the Texans can avoid the halftime boo birds.

3. Dameon Pierce resurrection
Hand in hand with the Texans' overall offensive ineptitude has been an inability to establish any semblance of a running game. As a result, rookie running back Dameon Pierce, who had been the sole reason to watch this team on offense, has gone from one of the league leading rushers through ten games to a tackling dummy for opposing defenses, gaining just eight yards in each of the previous two games. Needless to say, if a team with Kyle Allen at quarterback can't run the football, they're sunk. We need a Dameon Pierce resurrection.

2. Here comes the run (again)
Meanwhile, while the Texans' running game has slid into the toilet the last two weeks, the Texans' front seven on defense has served as a turnstile for opposing running games. Since the bye week, the Texans have been steamrolled on the ground by the Raiders (Josh Jacobs, 146 yards), the Titans (Derrick Henry, over 200 yards, AGAIN), and the Giants (Saquon Barkley, 152 yards). The Dolphins didn't gain much on the ground, because Tua Tagovailoa was doing just fine through the air (267 yards in ONE HALF). Even with Watson's return, maybe BECAUSE he is returning and likely will be rusty, expect a HUGE dosage of Nick Chubb and Kareem Hunt. This could be another one of those games where the opposition gains well over 200 yards on the ground.

1. Deshuan Watson's return
We've already covered the drama and emotion surrounding the return of Watson, so the bigger question is "What do we expect his level of play to be?" The Texans have not been a great passing defense this season, but they've been serviceable. In the small morsel of action Watson has seen as a Brown, a couple of drives in the first preseason game, he looked VERY rusty. I'm going to predict some rust for Deshaun, as well as perhaps a little bit of adjustment to a new system against live bullets. Browns head coach Kevin Stefanski's system is an offshoot of the Kubiak system that typically takes a full season to reach maximum proficiency in running.