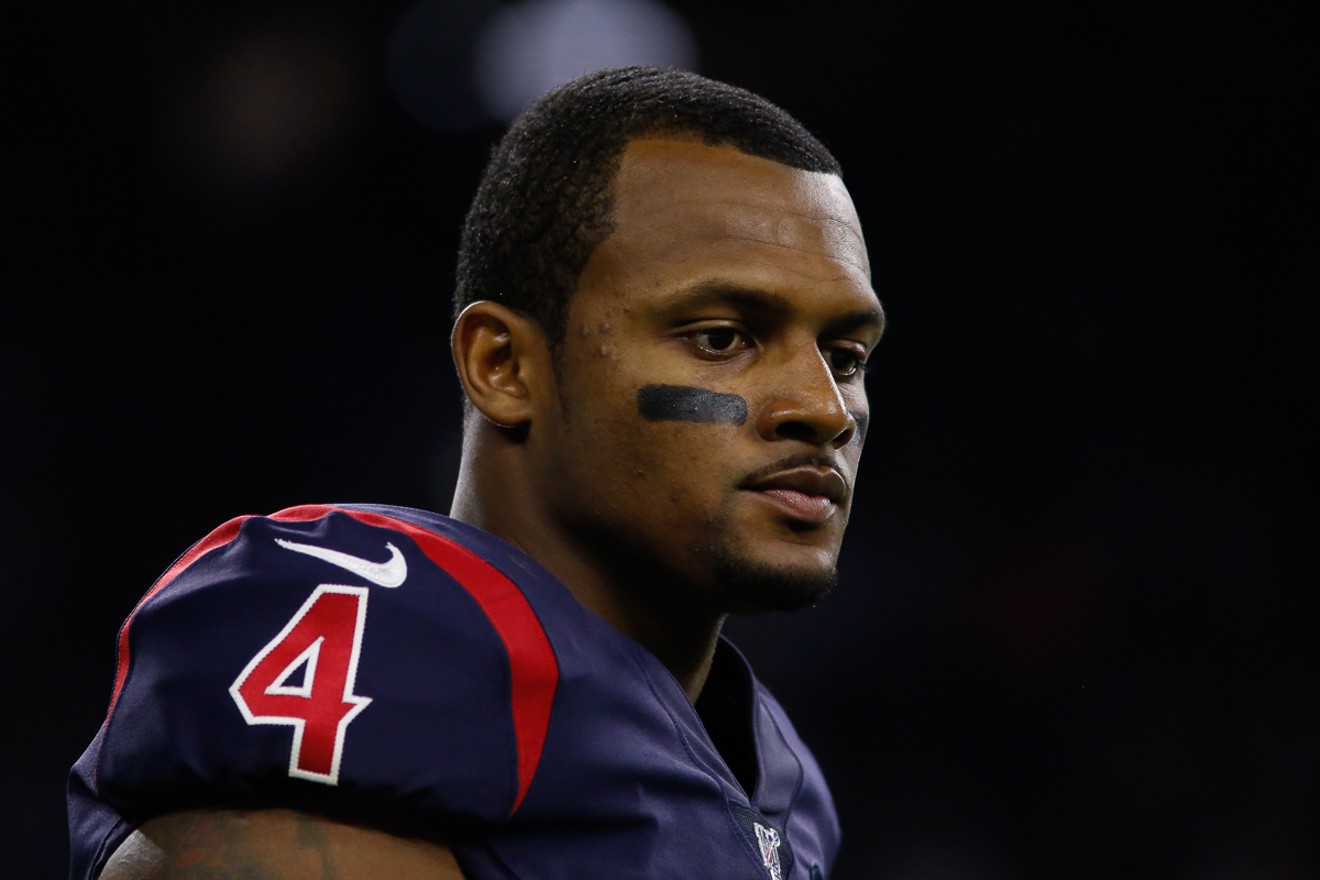 Deshaun Watson's punishment, if any, should be determined fairly soon. Photo by Eric Sauseda
The Deshaun Watson legal saga has bounced on and off the grid for the last 14 months or so. In between the ebbs and flows of the salvos back and forth between the representation for Watson and the 22 plaintiffs accusing him of various forms of sexual misconduct, the Houston Texans managed to trade Watson to the Cleveland Browns, with Watson getting a record setting guaranteed $230 million contract in the process.

Lately, things have been heating up once again between the two sides, as the NFL is reportedly winding down its investigation into the allegations against Watson. If there is a punishment to be handed down by the league, it could come soon. Completely intertwined with this timeframe is the recent media fireworks involving a few of Watson's accusers.

Last Tuesday, HBO's Real Sports with Bryant Gumbel ran a feature about the Watson cases, and included sit down interviews with some of his accusers, including Ashley Solis, whose lawsuit sparked the tidal wave of what eventually became 22 lawsuits.
Rusty Hardin, meanwhile, spent the middle of last week on the first REAL media tour he's done since he began defending Watson, appearing on multiple podcasts and radio shows outside of Houston. He also put out the following statement on the night HBO ran their feature:
Whether the NFL is watching all of this, only the NFL knows. They will hopefully make their determination based on the evidence they've seen and what they believe to be the veracity of the accusers and Watson, who they recently met with in Houston for three days. At this point, a suspension SEEMS likely, but again, only the NFL knows how suspension-worthy the evidence gleaned from their investigation is.

Reading the tea leaves, I would say any of the possibilities below are on the table, obviously to widely varying degrees. Let's examine each of them briefly:

The would be shocker, NO suspension
At this point, I would be very surprised if Watson were to steer clear of the long arm of the NFL's law, and that's based on just the remarkable volume of accusers. This would have to be a conspiracy of epic proportions for there to be NOTHING there that the NFL finds suspension worthy. Keep in mind, the NFL does not operate with the same thresholds for punishment as criminal nor civil law. You don't need a crime to have been committed to get suspended.

Slap on the wrist, 2-3 game suspension
I've said all along that I thought, at the very least, the NFL could pin some COVID protocol violations on Watson and punish him accordingly. Most of the massages in question took place during the 2020 window where the league was operating under strict pandemic protocols. A punishment of this volume might align with Watson skirting pandemic rules.

The foregone conclusion, 6-8 game suspension
The comparison that gets made most often to Watson's situation is Ben Roethlisberger about a decade or so ago, when he was not charged with a crime of sexual assault, but the league found enough in its investigation to suspend Big Ben for six games (appealed down to four games). Six games is the amount most often thrown around for Watson (again, mostly pure conjecture with little behind the scenes knowledge of the NFL investigation's contents). The volume of accusers could bump that number up.

The intriguing one for Texan fans, 12 game suspension
I don't know that there's any precedent that says 12 games makes sense for Watson. Let's be honest, there is so little with Watson's case that is precedented at all. The reason this one is interesting is because the Browns play the Texans in Week 13. Wow.

The one scaring Browns fans, one full season suspension
This is probably the second most discussed penalty, at least recently, for Watson among league insiders, behind only the six-game suspension scenario. This would be a disaster for the Browns, who would not only lose Watson for a full season, but because they paid him 99 percent of his 2022 money in the form of a signing bonus, they will have paid him $45 million to do nothing. Also, if Watson is suspended for a full season, that means he will go roughly 32 months between starts in NFL regular season games, come September 2023.

The "Trevor Bauer" career killer, TWO full season suspension
Dodger pitcher Trevor Bauer was recently suspended for two seasons for sexual assault with a woman he was with last year. Bauer, like Watson, was not charged with a crime, but MLB learned enough from their investigation to suspend Bauer for two full seasons, essentially torpedoing the prime of his career. While the link is a little clunky in connecting Bauer's and Watson's alleged transgressions, the general public relations vibe is that the NFL could come off looking less sensitive about crimes toward women, if they go lighter than MLB. I think two seasons is a VERY remote shot for Watson.