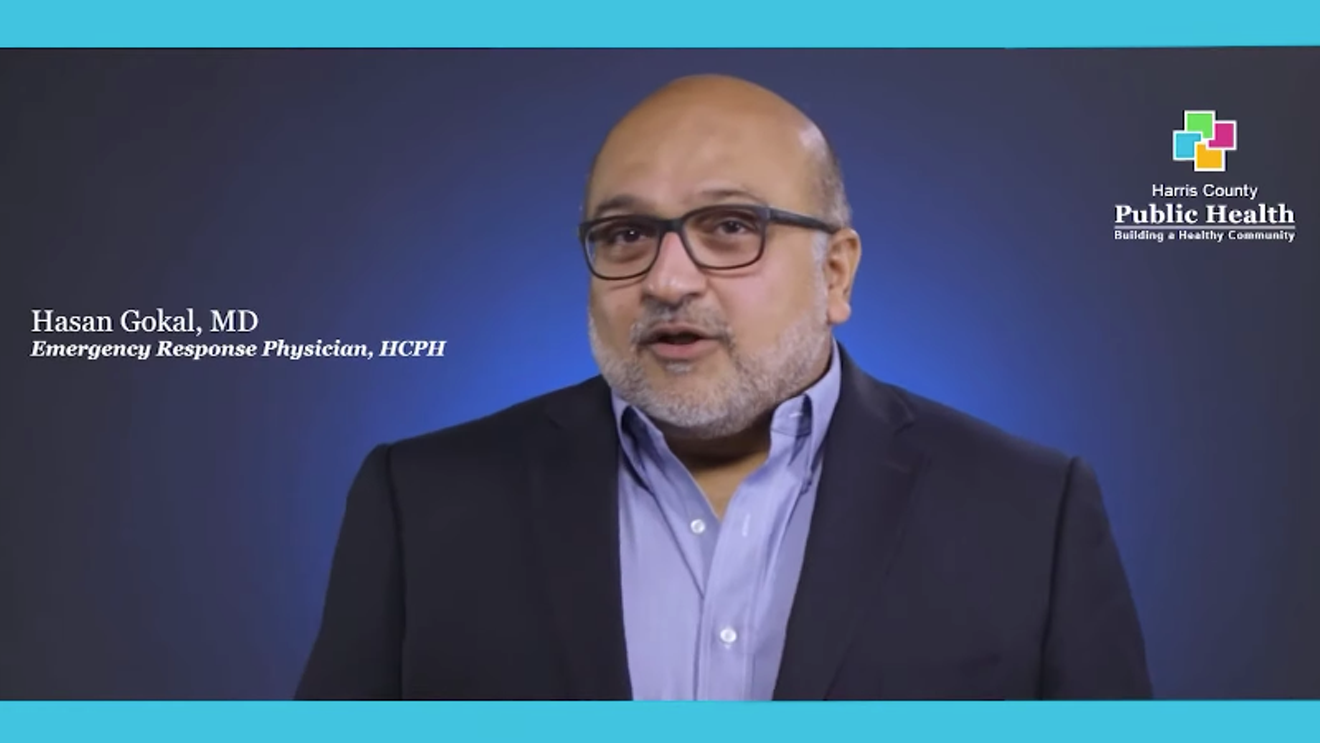 Once a fixture in Harris County COVID-19 education efforts, Dr. Hasan Gokal is now fighting the county in court. Screenshot
Dr. Hasan Gokal was fired by Harris County Public Health for allegedly stealing COVID-19 vaccine doses in December. But after he was found to have committed no crime by a local judge, a county grand jury and the Texas Medical Board, Gokal — a Pakistani immigrant — has now sued Harris County and the county health department for supposedly firing him with racist intent.

In a lawsuit filed Tuesday seeking more than $1 million in damages, Gokal and his attorney Joe Ahmad argue that Gokal acted within his duty as physician and per the recommendations of the state health department in making sure extra, opened doses of Moderna’s COVID-19 vaccine wouldn’t go to waste one night in late December 2020. According to Gokal’s legal team, county public health officials wrongfully fired him for not “equitably” distributing those vaccine doses which they claimed he’d stolen.

“I think when they saw a South Asian physician who gave it to other South Asians, they had been scrambling to come up with a reason to justify taking action against him,” Ahmad told the Houston Press.

A spokesman for Harris County Judge Lina Hidalgo declined a request for comment from the Press on Gokal’s lawsuit, citing an internal policy on not speaking publicly about pending litigation.

When Gokal realized ten doses of an opened Moderna vaccine vial from a Humble vaccination clinic would have to be thrown out if not used within about six hours, he said he scrambled to see if any of the staff and police officers on-site needed or wanted to take the soon to spoil doses (none of whom were South Asian, said Ahmad). When there were no takers at the clinic, Gokal began reaching out to his personal contacts in his phone, trying to crowdsource enough at-risk individuals who qualified to be vaccinated per the state’s guidelines at the time.

“It was dark. We were done. It was a long, exhausting day. I’ve got ten doses left, six hours to do it, and nobody in the first round wants it. What do you do? You start looking through your phone and seeing hey, does this person know somebody or have a family member who may be eligible? Either they’re old or they’re sick, or in a profession that’s a particular high risk? And that’s what I did,” Gokal said in an interview with the Press.

“It was dark. We were done. It was a long, exhausting day. I’ve got 10 doses left, six hours to do it, and nobody in the first round wants it. What do you do?" — Dr. Hasan Gokal, formerly of Harris County Public Health

In the suit, Gokal claims senior county health department official Trey Frankovich told him “OK, good” when Gokal called and said he would try and find individuals to whom he could administer the vaccine doses.

Gokal was able to vaccinate “an elderly mother with Parkinson’s disease, two bedridden women in their late 80s and a mother whose child is on a ventilator,” a press release announcing the lawsuit read. “When he found no other takers and the clock was running out, he vaccinated his own wife” who has a chronic inflammatory lung disease, the release continued.

The next morning, Gokal entered the information about whom he’d vaccinated that evening into the state vaccination database. Days later, he was fired by the county health department, and Harris County District Attorney Kim Ogg announced he’d been criminally charged with stealing those ten vaccine doses.

Harris County criminal court Judge Franklin Bynum dismissed the case against Gokal for a lack of probable cause. When Ogg’s office then put the case in front of a grand jury, the jurors decided not to charge Gokal with any crime. Harris County Public Health also reported Gokal to the Texas Medical Board seeking to have his medical license revoked; the board threw the case out.

Despite having the criminal charges against him dropped and the ultimate failure of the county’s attempt to strip him of his medical license, Gokal said he and his family are still recovering from the whole ordeal.

“It was rough. There’s no easy way to put it,” Gokal said. “Suddenly, I’d spent how many, 27 years, working in medicine with an impeccable record, and suddenly everything goes out the window within a matter of minutes? You can’t imagine.”

As a board-certified emergency room physician, Gokal said he’s been able to find work in Houston Methodist and Memorial Hermann ERs in recent months. But he told the Press he truly misses the work he did as a public health official during the pandemic. Before his controversy, he was a regular presence in YouTube videos the county health department posted to educate the community about the coronavirus, and was one of the main liaisons between the state health department and Harris County Public Health in determining county COVID-19 policies before he was accused of theft.

“I enjoyed it, and it was obvious in those videos. I would love to do it again,” Gokal said, though he realizes the controversy surrounding his case would make finding another public health job extremely difficult, if not impossible.

“Look, in the ER, we save lives,” he continued. “In public health, I feel we save millions of lives, or potentially impact [that many of] them at a time. So to me, that has a certain reward that you can’t beat.”

“I’m looking for fairness. Nothing more, nothing less,” Gokal said when asked about the goal of his lawsuit. “Number two, I hope that nobody else has to go through this again, no other physician who suddenly gets criminalized for doing what they were expected to do.”

“That’s not right. That’s not fair,” he continued.