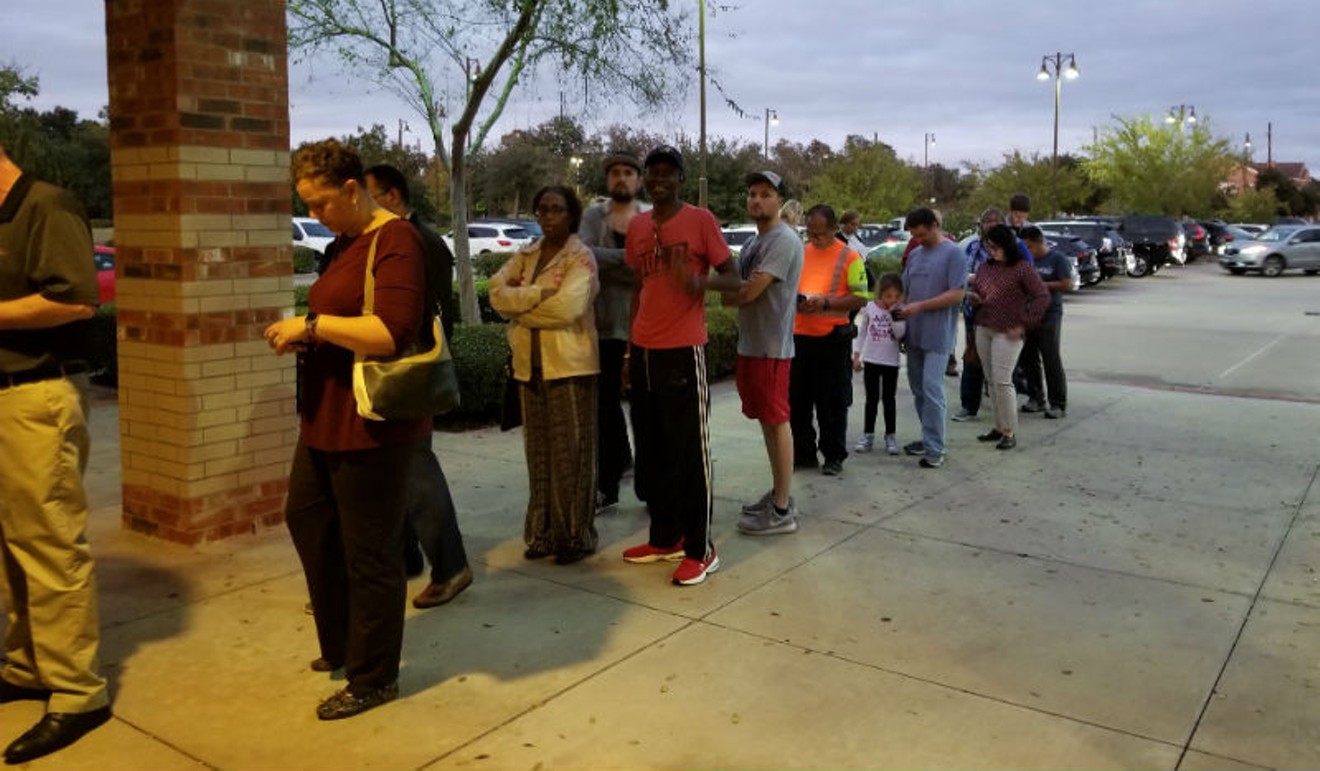 Those who skipped early voting got to spend some quality time in line to make their votes count all over the area Tuesday. Photo by Margaret Downing
Thanks to some new directives from Austin that had Harris County's election returns all driven to a central point last night instead of sent on electronically, people who stayed up till the wee hours of the morning to get more complete returns were completely disappointed.

The delay was noted and explained in an official statement posted by Harris County Clerk Diane Trautman, who said the Texas Secretary of State's Office had ordered the collection change and therefore it was going to take a while to get returns in.
click to enlarge


As of 6:09 this morning however, with 754 of 757 voting centers reporting, incumbent Sylvestor Turner had 46.4 percent of the vote while Tony Buzbee had 28.75. Bill King had the third highest percentage with 14 percent in a 12 candidate field.

And it appears that voters bought into the METRO Next Plan approving a $3.5 billion bond proposal to improve the city's public transportation system. Returns showed more than 67 percent of them voted om favor of Proposition A.

Perhaps showing that voters are tired of the continued turmoil at the Houston ISD school board and the questionable actions of some of its trustees, incumbent Sergio Lira was not re-elected to his Position 3 post. Opponent Dani Hernandez took in more than 63 percent of the vote while he had 36 percent. In like manner, longtime power house Diana Davila was defeated by challenger Judith Cruz who scored 63 percent of the vote to Davila's 36 percent. No runoff needed here.

However the continued controversy about the operations of HISD with the threat of a state takeover, didn't keep HISD trustee Rhonda Skillern-Jones from leading her race for Houston Community College System District II trustee with 44.84 percent of the vote. Kathy Lynch-Gunter with 24.81 percent will meet her in a runoff. Controversial incumbent Dave Wilson came in second in his District I HCC race with 32 percent of the vote to challenger Monica Flores Richart's 48.7 percent.

The Position 4 HISD race with no incumbents running saw three of the four candidates score within a hair's breath of each other with Patricia K, Allen coming in at 30.58 percent, Matt Barnes at 29.51 percent and Reagan Flowers at 27.72 percent. Allen and Barnes will be in the runoff.  Likewise in the position 2 race, Kathy Blueford-Daniels (42.49 percent) and John Curtis Gibbs (21.56 percent) will compete in a runoff.
KEEP THE HOUSTON PRESS FREE... Since we started the Houston Press, it has been defined as the free, independent voice of Houston, and we'd like to keep it that way. With local media under siege, it's more important than ever for us to rally support behind funding our local journalism. You can help by participating in our "I Support" program, allowing us to keep offering readers access to our incisive coverage of local news, food and culture with no paywalls.
Make a one-time donation today for as little as $1.