Thanks to COVID-19, It's Even Harder to Access Abortion in Texas


Abortion is currently legal and available in the state of Texas, but the COVID-19 pandemic has made it much more difficult for Texans to exercise their constitutional right to receive one over the past few months.

For 31 days early in the pandemic from March 23 to April 22, abortion was routinely unavailable for Texans due to an executive order from Gov. Greg Abbott and the legal battle that followed. While the order expired April 22, Texans still have to jump through many onerous hoops in order to receive an abortion, including paying for the procedure — which can run between $300 and $1,500 in Texas according to the ACLU — without the help of insurance or Medicaid funding due to state restrictions.

Between the fear of getting sick by venturing out into public and the financial pressures facing Texans who have lost jobs or have to work reduced hours due to the pandemic, COVID-19 has exacerbated the existing barriers to getting an abortion in Texas, especially for poor Texans and Texans of color who are both disproportiantely affected by COVID-19 and abortion restrcitions.

“Unfortunately, it can be very difficult to navigate for a lot of people,” said Dr. Bhavik Kumar, medical director of Planned Parenthood Gulf Coast in Houston.

Kumar, who grew up in Corsicana, says he is proud to offer a much-needed service to the people of his home state, especially since he knows the abortion care he provides is under constant attack from a conservative state government that tirelessly seeks to reduce access to abortion, as they did back in March at the onset of the COVID-19 crisis.

On March 23, Greg Abbott issued an executive order halting “any unnecessary medical procedures” in order to preserve medical supplies for doctors treating coronavirus patients. Immediately after, Texas Attorney General Ken Paxton decreed the order applied to abortions. That kicked off a month-long legal battle between the state and abortion providers, who argued that Abbott and Paxton were taking advantage of the pandemic to create a false pretense for depriving Texans access to abortions.

“They’re just so relentless when it comes to abortion,” Kumar said, expressing skepticism that Abbott’s move to limit abortion access was truly in the interest of public health.

“I think it’s based on what they think their supporters want to see politically,” he continued, “because it’s so clear that it harms people, and so clear that it was not helpful for anybody.”

The following weeks were marked by a ping-pong volley of restraining orders from federal district court judges that temporarily gave Texan abortion providers permission to operate, followed by procedural moves from the Fifth Circuit Court of Appeals to pause or overrule those restraining orders which put abortions on hold all over again.

Kumar said that this back and forth meant the Planned Parenthood Gulf Coast health center had to open and close eight times in a 31-day span. One afternoon, Kumar received a text message from a colleague announcing that the health center had to close up shop immediately due to a new court ruling. He was in the middle of performing a procedure when he got the news. 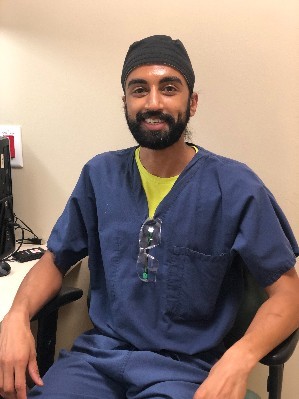 Dr. Bhavik Kumar is the medical director of Planned Parenthood Gulf Coast here in Houston, and provides abortion care among other healthcare services.
Photo by Planned Parenthood Gulf Coast
After he safely completed the procedure, Kumar said he remembers how hard it was to go and tell all the other patients already in the building, some of whom were already getting prepped with IVs, that they would have to leave without receiving the care they needed.

“It was a really difficult time,” Kumar said, “and nothing that I ever expected in my career to have to do, to have to tell people I can take care of you but the government’s not letting me, and I don’t have any answers for you.”

Abortions are time-sensitive procedures, especially so in Texas due to the fact that abortions after 20 weeks of pregnancy were outlawed in 2013. Kumar said that during the legal wrangling over the abortion provision in Abbott’s executive order, he heard several stories of patients risking their health by traveling across state lines during the pandemic because they were unable to receive an abortion locally.

Abbott’s initial executive order on medical procedures expired on April 22, and since then, no new orders have been issued that attempt to limit abortion in Texas. While Abbott did issue a new executive order on June 25 limiting elective surgeries for non-life threatening conditions, Kumar explained that order only applies to hospitals, so non-hospital abortion providers like Planned Parenthood health centers are exempt from its provisions, as are the vast majority of abortion providers in Texas. But even now, as was the case before the pandemic, there are still numerous barriers to getting an abortion in the Lone Star State.

In Texas, the cost of an abortion cannot be covered by Medicaid or by private insurance except in rare cases. Abortions can only be performed once a patient has an ultrasound at least 24 hours before the procedure and there is a mandatory 24-hour waiting period for abortions. Minors can only receive an abortion with a parent’s consent unless they’ve received a judicial waiver, despite the fact that the age of consent for sex in Texas is 17.

Back in 2013, the Texas Legislature passed House Bill 2 which required abortion providers to have admitting privileges at a local hospital in order for them to stay in business in addition to banning abortions after 20 weeks post-fertilization. The hospital admitting privileges requirement was overturned by the U.S. Supreme Court’s decision in Whole Woman’s Health v. Hellerstedt in 2016.

In that case, a 5-3 majority ruled that this provision placed an undue burden on Texans’ constitutional right to seek an abortion since it would require the majority of Texas clinics to shut down and because the State of Texas couldn’t prove the requirement would actually improve the level of care provided by abortion practitioners. Just last week, the Supreme Court ruled that a virtually identical Louisiana law requiring hospital admitting privileges for abortion providers was unconstitutional on the same grounds as in the Whole Woman’s Health case.

Although the Whole Woman’s Health decision was welcomed by state reproductive rights advocates, HB 2’s burdensome provisions cut the number of abortion providers in Texas by more than half during the three years between its passing and the Supreme Court ruling in 2016.

According to UT Austin’s Texas Policy Evaluation Project, there were 41 facilities providing abortions across Texas as of April 2013, before HB 2 was passed. By the time the Whole Woman’s Health case had been decided in June 2016, Planned Parenthood reported only 17 facilities were open.

Planned Parenthood Gulf Coast says that there are now 24 total abortion clinics across Texas, but only 21 of them are currently open for business. Eight of them are in the Houston area, including the two PPGC health centers in Houston and in Stafford.

Across the county, nonprofit abortion funds help people overcome financial and logistical barriers to receiving abortions. One such group is Houston’s own Clinic Access Support Network.

Bridget Schilling, a CASN board member and longtime volunteer, said their group currently has about 70 active volunteers. The main form of support they provide to clients is giving free rides to and from abortion clinics, typically after a client is referred to them by an abortion provider.

CASN volunteers also give rides to and from legal hearings for minors seeking judicial waivers from having to get a parent’s consent to have an abortion. Through funding raised from grants and grassroots donations, CASN helps pay for abortions and associated costs, like childcare or hotel stays for people coming from out of state because they are closer to a clinic in Texas than where they’re from.

In 2019, CASN helped approximately 1,100 individuals get to and from abortion related appointments. “People come to us mostly out of stigma or financial need, or both,” said Schilling. “Either they can’t tell anybody that they’re getting an abortion, or they don’t have anybody that can assist them in getting to their abortions.”

The pandemic has made it difficult for CASN to serve their clients for a number of reasons. While the courts were in dispute about Abbott’s abortion ban between March and April, Schilling said that they raised funds to help Texans travel to other states to have their abortions.

Even now that Texan clinics are open and operational again, the drastic increase in the rate at which COVID-19 is spreading in recent weeks has put CASN in a difficult position, as they have to consider the health and safety of their volunteers in addition to the clients they serve.

Several weeks ago, CASN moved to reduce their volunteers’ exposure to COVID-19 by only asking them to offer post-abortion rides from clinics while providing funding for clients to use rideshare apps to get to their appointments.

Now that COVID-19 is spreading so uncontrollably throughout the Houston area, CASN has stopped asking volunteers to give any rides at all to clients for the foreseeable future, opting instead to use their funding to pay for clients’ rideshare trips to and from abortion appointments and to fund procedures and other associated costs.

The monetary support CASN is able to provide is more important now than ever due to COVID-19’s impact on the finances of Texans, especially those who were already living paycheck to paycheck and who now may be out of work completely.

“Even if COVID has disrupted our primary operations, we’re still dedicated to doing everything we can with the resources we have to get people to their appointments,” Schilling said, “especially recognizing that financial burden is going to be an even more vital factor right now.”

Given how the pandemic has made existing barriers to abortion in Texas even steeper, reproductive rights advocates know they’ll need to fight harder than ever to make sure Texans know that abortion is safe and accessible, and that there are resources available to help them if they’re in need.

“One thing about abortion funds is that we are persistent,” said Schilling.

The same goes for Texan abortion providers like Dr. Kumar, despite the ongoing efforts of some state politicians to limit abortion at any cost.

“That's what all of this was designed to do, to string people back and forth, and string us back and forth … but we won’t back down,” Kumar said.
KEEP THE HOUSTON PRESS FREE... Since we started the Houston Press, it has been defined as the free, independent voice of Houston, and we'd like to keep it that way. With local media under siege, it's more important than ever for us to rally support behind funding our local journalism. You can help by participating in our "I Support" program, allowing us to keep offering readers access to our incisive coverage of local news, food and culture with no paywalls.
Make a one-time donation today for as little as $1.