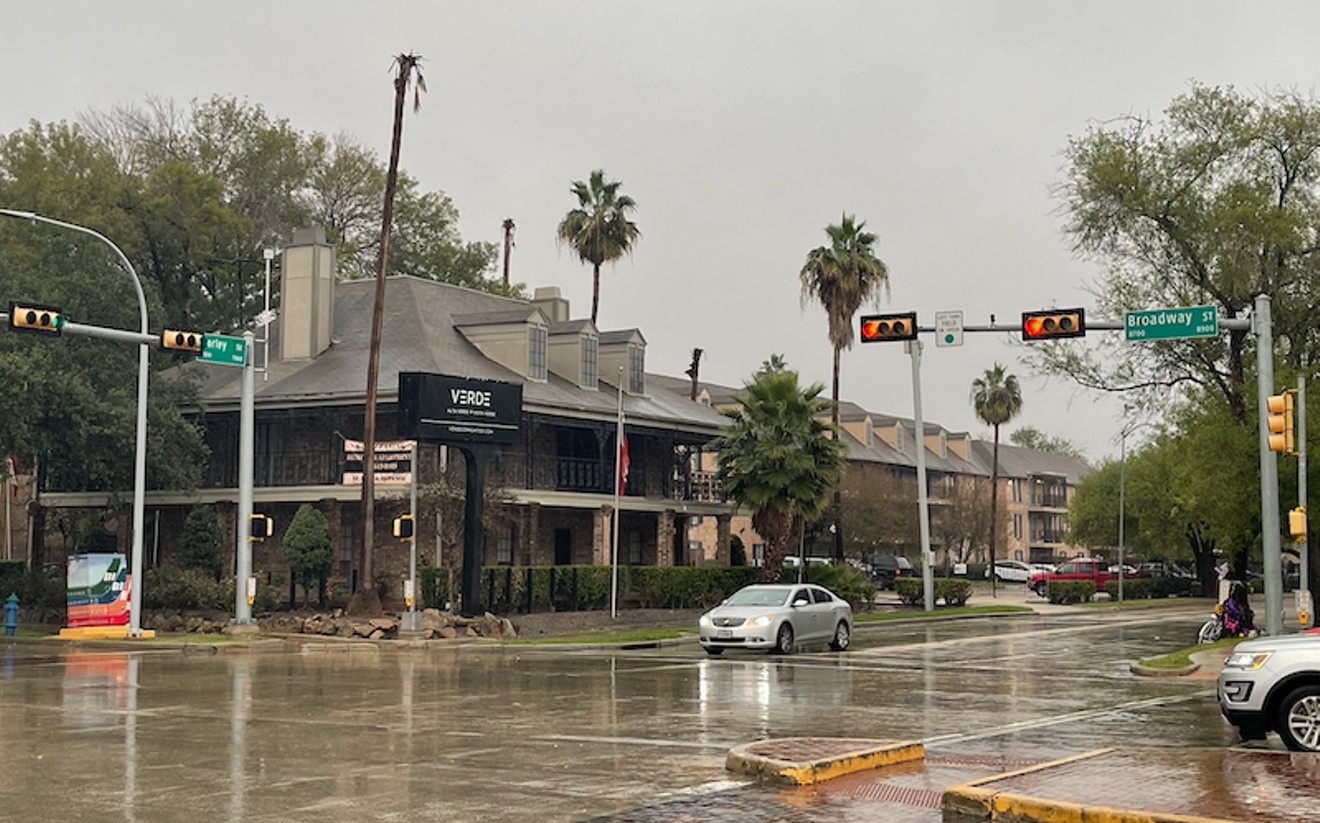 The intersection between Broadway and Morley Street, where Powell was riding her bicycle from work the morning of the accident. Photo by Faith Bugenhagen

On October 8 at 6:37 a.m. Bre’Ana Powell, 27, was bicycling home from her work at Hobby Airport where she worked night shifts, while she attended veterinary school. When Powell turned right into the intersection between Broadway and Morley, she was struck by a Republic Waste Services of Texas garbage truck.


The truck was driven by an employee of the company, identified as Jonathan David Woods, according to police. Powell was transported to Ben Taub Hospital. By 7:09 p.m. she was pronounced dead at 7:09 a.m.


According to Muhammad Aziz, attorney at Abraham Watkins law firm, when Powell was struck, she was knocked out of her shoes, and then dragged by the truck for a while following the initial impact.


Aziz alongside Karl Long, Jessie Ormand, and Derrell Wright of Derrell L. Wright law firm filed a wrongful death lawsuit on Monday on behalf of Powell’s mother, Diane Francis. This lawsuit named Francis and the estate of Powell as the plaintiffs and Republic Waste Group and Woods as the defendants.


“Under Texas law, Mrs. Francis, Bre’Ana’s mom, has a claim over the loss of her child, so the estate claim is just the legal way of bringing Bre’Ana’s own claim on her behalf in the case,” Aziz said. The law firm set the legal damages over the $1 million mark, as required by state law, meaning the family could receive a settlement of a sum anywhere beyond that which will be determined in court.


Attorney Brian T. Coolidge, from Mayer LLP. who is representing Republic Waste Services, declined to to comment, when contacted by the Houston Press, citing ongoing litigation.


In his statement, Woods claimed to have not seen Powell, although all witnesses reported they were able to see her due to the reflective vest she was wearing. The driver also said he pulled over to a nearby parking lot, following the impact, as he thought the loud noise was a potential blow out of his truck.


This account did not match the witnesses’ accounts, who said they had to scream, honk and flash their lights to get Woods to stop, in the police report. “We do not have any evidence that he was trying to flee the scene,” said Aziz. “It just seems like he was completely unaware of what was on his right side as he took the turn, but he should have seen her since everyone else had seen her,” Aziz said.


Powell, who had been riding her bike on the sidewalk, came to a pause before she made the turn. It was stated that Powell did disregard a stop and go signal displaying a solid red and entered the intersection at the incorrect time.


“They [officers] seem to be focused on the fact that Bre’Ana entered the intersection when she should have stopped,” Aziz said. “There is not a lot of questioning seen in the witness statements about the turn signal of the garbage truck.”


At the time of the impact, Bre’Ana had entered the intersection and was riding on the crosswalk.


“If she was on the crosswalk, she had the right of way and should have been protected, regardless of when she entered the intersection,” said Fred Zapalac, owner of Blue Line BIke Lab and longtime cyclist advocate.


Zapalac, who was once a commercial driver, said these larger vehicles need to pay more attention to who they are sharing the road with, especially considering that they could certainly cause deaths if they were to hit somebody.


Melissa Simms, behind Houston Ghost Bike, said that crashes involving commercial vehicles equate to around 15-20 percent of cycling accidents. “When I am dealing with larger vehicles like those, I try to make contact with whoever is driving before I go,” Simms said. “Because if I don’t, I don’t know if they have seen me.”


Simms advised all cyclists to do this when sharing the road with these trucks. “I just feel like they [commercial trucks] probably have really terrible blind spots, because they are so large and they just can’t see,” she said.


Simms has not been contacted by Powell’s family, so there is no plan in the works to put a ghost bike in remembrance of Powell at the intersection currently. There is a ghost bike a block away at the same intersection where Powell was hit, from an accident that happened in 2014 when a cyclist named Bobby Brooks was struck by a school bus. 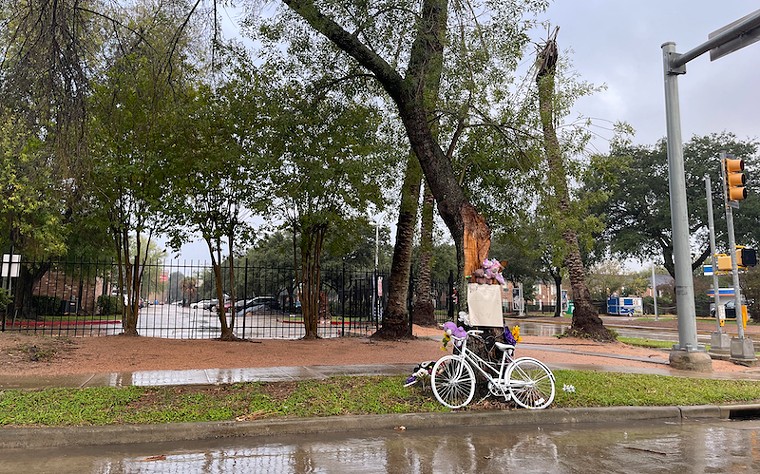 Bobby Brooks's ghost bike, at the corner of Broadway and Morley Street.
Photo by Faith Bugenhagen

Though the civil suit was filed, the investigation of Powell’s accident conducted by the Houston Police Department is still an active investigation, according to HPD public information officer Shay Awosiyan and no charges have been filed.


“What we do know is that there were at least four surveillance video cameras that had footage of the accident that were turned over to HPD,” Aziz said. “Footage from those cameras has not been released, we cannot speculate, but from what I have seen so far I don’t expect any criminal charges.”


Aziz said that one indication that there could be no criminal charges filed, was the release of several pieces of evidence from the accident to their law firm. 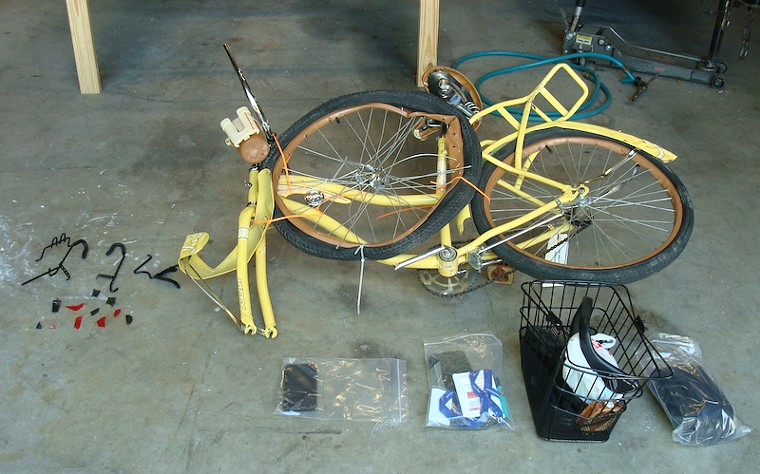 “They released Bre’Ana’s bicycle and some personal belongings that were on her person during the incident,” Aziz said. “Typically, if there is going to be a prosecution, those types of things don’t happen, they usually keep the evidence.”