Hugo Rodriguez with Keller Williams Memorial has the listing for 1819 Lubbock. Photo by Miranda Abrams/Next Listing
If you can plead guilty to binge-watching more than a few episodes of Fixer Upper, Property Brothers, or This Old House, then the Washington East/Sabine market area just might be the neighborhood for you. The area includes the Old Sixth Ward Historic District, which has the largest concentration of Victorian houses in Houston.

Built in 1857, the historic home at 1819 Lubbock has already been saved once from the wrecking ball. It was moved from 1720 Spring Street in 2006 to this lot at the corner of Silver and Lubbock and lifted onto the roof of a custom-designed first floor garage/workshop. The entire home has been framed out and is literally a blank slate waiting for somebody with the imagination, pocketbook and willingness to transform this historic gem into a three-story showplace.

We dug deep into the archives over at the Old Sixth Ward Neighborhood Association, and learned that 1817 and 1819 Lubbock were sold by Nelson McStea and Jesse R. Value (of New Orleans) to Barta Kadernushka in 1885; a year later the lots were sold to William Gehring, a carpenter in the Southern Pacific shops and later a janitor at the courthouse. He and his wife Lizzie had four sons and lived there until their deaths in the 1940s. 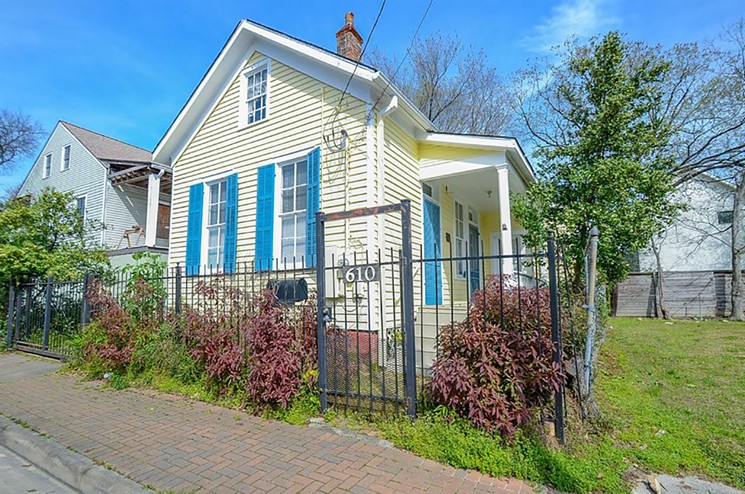 Hugo Rodriguez with Keller Williams Memorial has the listing for 1819 Lubbock, which includes the property at 610 Silver.
Photo by Miranda Abrams/Next Listing
The listing at 1819 Lubbock also is a two-for-one special, with a second historic property on the lot: a cute as a button, 852 square foot home — also listed on the National Register of Historic Places — which makes residing on the property while refurbishing the big house a slam dunk.

Hugo Rodriguez with Keller Williams® Realty Memorial, who has the listing for the dual properties, tells us that the neighborhood combines a variety of amenities: the charm of historic homes, the energy of the Arts District, the excitement of new restaurants and businesses, and proximity to downtown, Buffalo Bayou Park and its bike trails.

Keller Williams® Realty Memorial's Rodriguez has listed the properties at Lubbock and Silver for $494,900.

On the next block over is another historic home at 1808 Lubbock. The undeveloped property changed hands several times until Alvina Krupp and her husband Christian, a saloon keeper, bought the lot in 1891 and lived there in a small house for about ten years. In 1905 Patrick O'Leary, a policeman originally from Ireland, purchased the lot from Houston Ice and Brewing Co. for $1,500 and lived there with his wife Sarah until they died in the 1930s. After their death it is presumed that Anne and Agnes Doherty inherited the lot; Sarah's maiden name was Doherty. More recently, auto mechanic Joe G. Bender and his wife Francis lived at 1806 and 1808 Lubbock; the widowed Francis lived there until at least 1975.

The City of Houston designated the Old Sixth Ward a Historic District in 1997 and, a decade later, it became Houston's first Protected Houston District, paving the way for preservation. 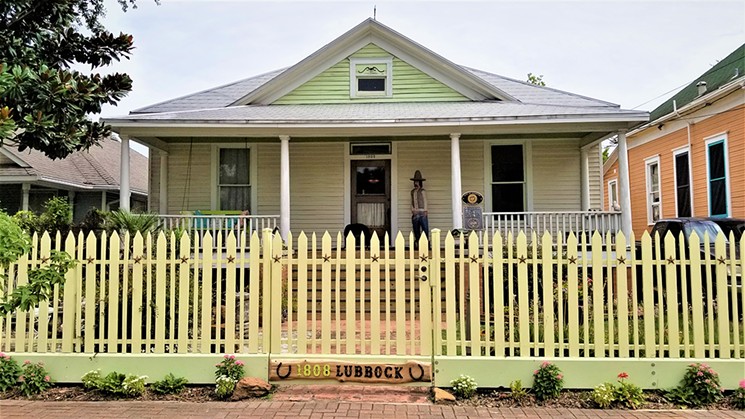 Suzanne Burck with Realty Associates has the listing for 1808 Lubbock.
Photo by Suzanne Burck
The adorable yellow and green house that's currently on the lot at 1808 Lubbock, now known as the Arthur and Katherine Spring House, was moved here in the 1990s from 1804 North Memorial Way. Named for Arthur H. Spring, a brakeman for the H. & T.C. Railroad, it's believed the house was built in 1906.

Suzanne Burck with Realty Associates, who has the listing for 1808 Lubbock, has high praise for the neighborhood, with its high Walk Score, the grocer Henderson & Kane, and local coffee shops like Catalina Coffee. Arts District Houston (portions of the First and Sixth Wards), which recently unveiled new murals at Henderson & Kane and Decatur Bar & Pop-Up Factory, is celebrating Arts District Month with several events.

"Most of the homes were built in the 1800s and they’re all protected so they can’t be torn down. And of course we’re just minutes away from downtown so we can walk down to Buffalo Bayou Park and use the hike and bike trails down there and we have our own neighborhood park by a school," says Burck, adding that the playground of the old Dow School (now home to MECA) is being renovated to create a new park for children.

"We’re the largest collection of historic homes in the Houston area, second to Galveston. So it’s a pretty neat thing," says Burck. "We have our own neighborhood dog park — it’s called Park for Humans and Dogs — it’s on Sawyer Avenue."

She also says that the Old Sixth Ward Neighborhood Association hosts Six at Six, where residents meet up at different venues on the sixth day of each month. "It’s just a quiet neighborhood. It doesn’t flood, so that’s a real plus, and of course the house is just a beautiful house and it’s registered as a historic home." 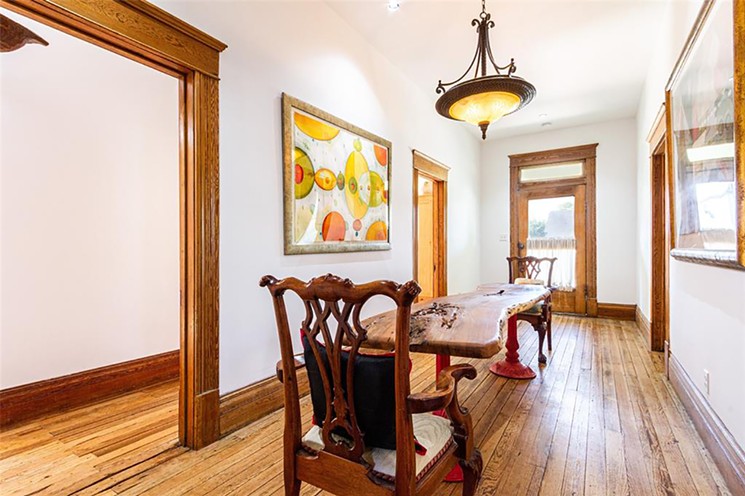 Suzanne Burck with Realty Associates has the listing for 1808 Lubbock.
Photo by Square Foot Photography
The Arthur and Katherine Spring House has an upstairs loft that would make a nice office or artist studio, original wood floors, tall ceilings and windows, stained glass, and vintage chandeliers. It's also a gardener's paradise with a fish pond, raised garden beds, outdoor shower, and decorative pavers. Realty Associates' Burck has listed the property at 1808 Lubbock for $599,000.

While the Old Sixth Ward is bounded by Washington and Union to the north, roughly Sawyer to the West, and roughly Sabine to the east, the HAR.com market area of Washington East/Sabine also includes properties north of Washington Avenue and south of I-10.

There are also newer homes in this market area: some are outside the Protected Houston District, built before it was established, or on what was previously a vacant lot. 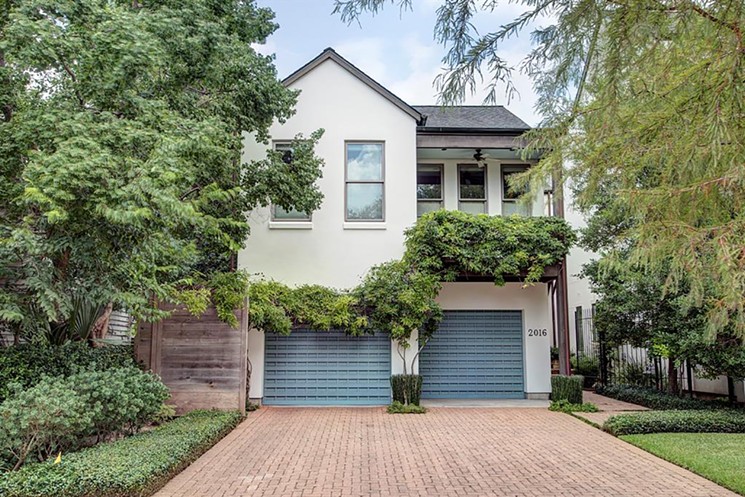 Tim Surratt with Greenwood King Properties - Kirby Office, who has the listing, says the home has only had one owner, who relays that the neighborhood has really improved over the years with the development of the Washington Avenue corridor.

The two bedroom, 1,715 square foot contemporary-traditional home has all the bells and whistles one could hope for with modern construction: a chef's kitchen with granite counters, a large walk-in closet, and a spacious master suite that overlooks the back yard and garden. 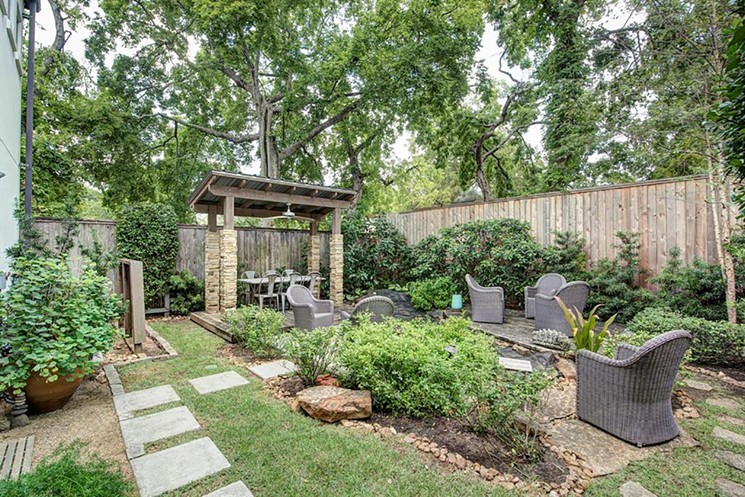 Tim Surratt with Greenwood King Properties has listed the property at 2016 Decatur.
Photo by Wade Blissard
The back yard at 2016 Decatur has been professionally landscaped and has a covered arbor for outdoor dining.

"A couple of [other] things that I like: Standing in the front yard you can see the downtown skyline, which I absolutely love," says Surratt. "It’s a freestanding home with a back yard and driveway, which is unusual to have for a patio home these days, especially in this price range." Greenwood King Properties' Surratt has listed the property at 2016 Decatur for $519,000.

Read more about the Old Sixth Ward in the City of Houston's Historic Preservation Manual at houstontx.gov/planning/HistoricPres/HistoricPreservationManual.

Learn more about Arts District Houston and download its Insider's Guide at artsdistricthouston.com.
KEEP THE HOUSTON PRESS FREE... Since we started the Houston Press, it has been defined as the free, independent voice of Houston, and we'd like to keep it that way. With local media under siege, it's more important than ever for us to rally support behind funding our local journalism. You can help by participating in our "I Support" program, allowing us to keep offering readers access to our incisive coverage of local news, food and culture with no paywalls.
Make a one-time donation today for as little as $1.