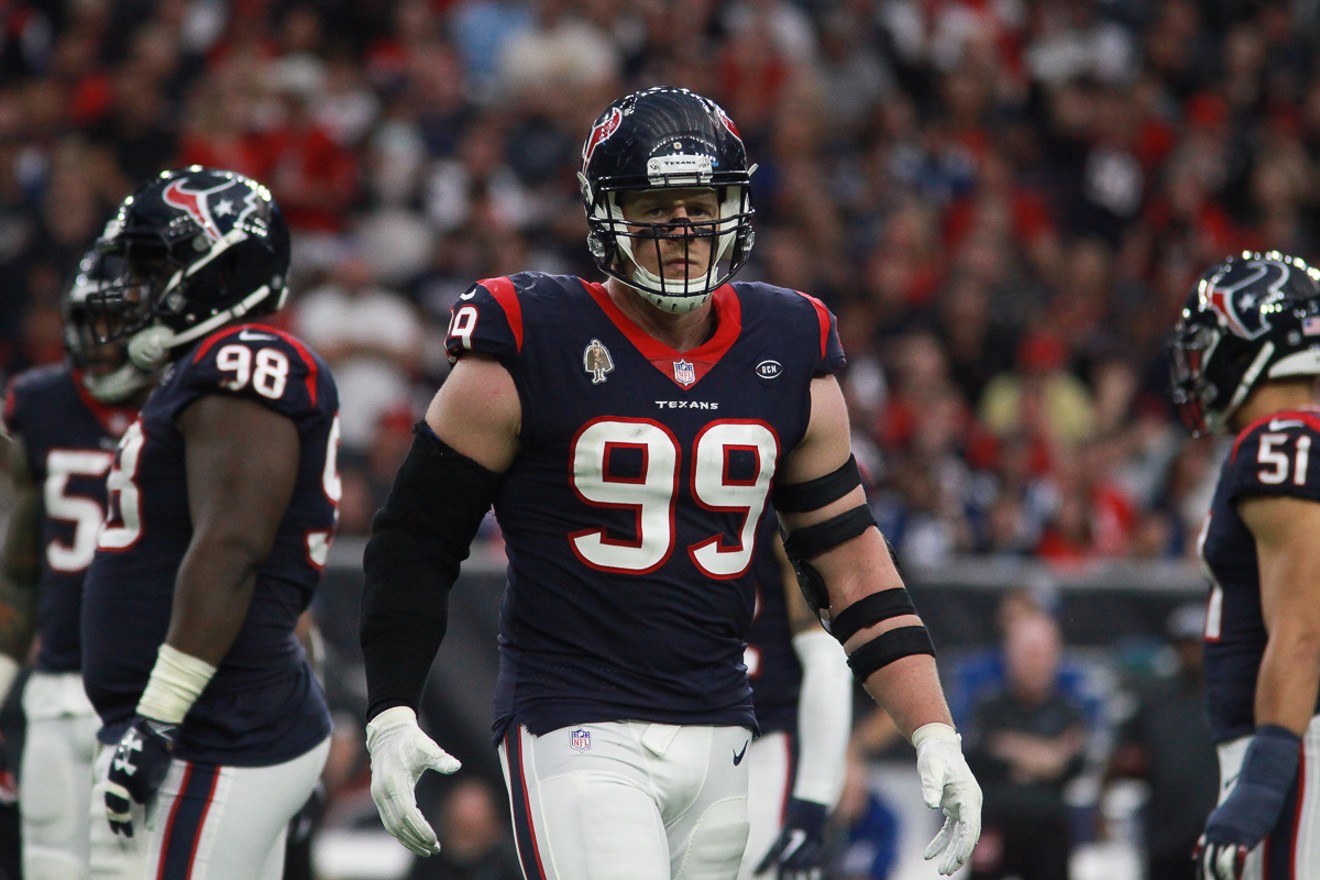 The Texans will need a peak level J.J. Watt to go 11-5 again in 2019. Photo by Eric Sauseda
The Houston Texans' 2019 schedule has now been revealed, and generally speaking, the one thing we can all agree on is that the list of opposing quarterbacks is scary as hell. If you want to go through it in detail, I've already discussed the many pitfalls of the slate of games in this space. It's exciting, but frightening, like riding the tallest roller coaster at the theme park.


So it's never too early to get on the record with what we think will happen in 2019. Any predictions right now, of course, are subject to change, based on the draft, injuries, and general whimsy. So how will the 2019 Houston Texans do? Well, as some of you know from reading my season previews in years past, I like to break the season down into three categories of games. We call it the Pendergast Method, and this season, the games go like this:

Must wins: These are games that, to have any chance of making the playoffs, the Texans have to cash in on. Worst case, you can have one mulligan, but lose two of these games and you’re probably not a double-digit-win team.

Coin flippers: Games that could go either way and will likely be played within one score. To make the playoffs, the Texans need to win more of these games than they lose.

Steals: Games in which the Texans will likely be an underdog of five points or more against teams that they’ve historically struggled with, match up poorly with or that they have to play in a hostile environment in potentially adverse conditions. If you’re going to be a playoff team, you probably need to win at least one of these along the way.


So where do the games on the 2019 slate stack up when we start applying the Pendergast Method? Let’s take a look:

These are all games in which, right now at this moment, I would forecast the Texans to be favorites of at least slightly more than a field goal. As you can see, there really aren't any layups on this schedule like we've seen in seasons past. Last season, the Texans had five games in which they were favored by 6.5 points or more. How many this year? Denver, maybe? This schedule is night and day compared to last year.

Not nearly as much gray area on this schedule as there's been in seasons past. These are games that I can see hovering around a "PICK EM," a 50/50 shot, hence the phrase "coin flippers."

I can never remember a season where there have been this many games on the docket in which the Texans enter the season as the very clear, decided underdog. To qualify as a "STEAL," the Texans need to be an underdog of more than a field goal. A few of these have the potential to be a spread of more than a TOUCHDOWN. To wit, the Texans have been installed as a 7.5 point underdog inWeek 1 at New Orleans.

What is the path to the same record as 2018, a robust 11-5?
At this point, it probably involves a lot of prayer. Reasonable MATH says they would need to go 6-1 against the "MUST WINS," which is possible since all seven are home games, and then they would HAVE to go 2-1 versus the "COIN FLIPPERS" and 3-3 against the "STEALS," and right now I have a hard time finding three wins in those six games.

What is my prediction?
With the issues on the offensive line and in the secondary, I'm thinking more along the lines of 8-8 against this schedule, with a breakdown like this — 5-2 against the "MUST WINS," 2-1 against the "COIN FLIPPERS," and 1-5 against the "STEALS."