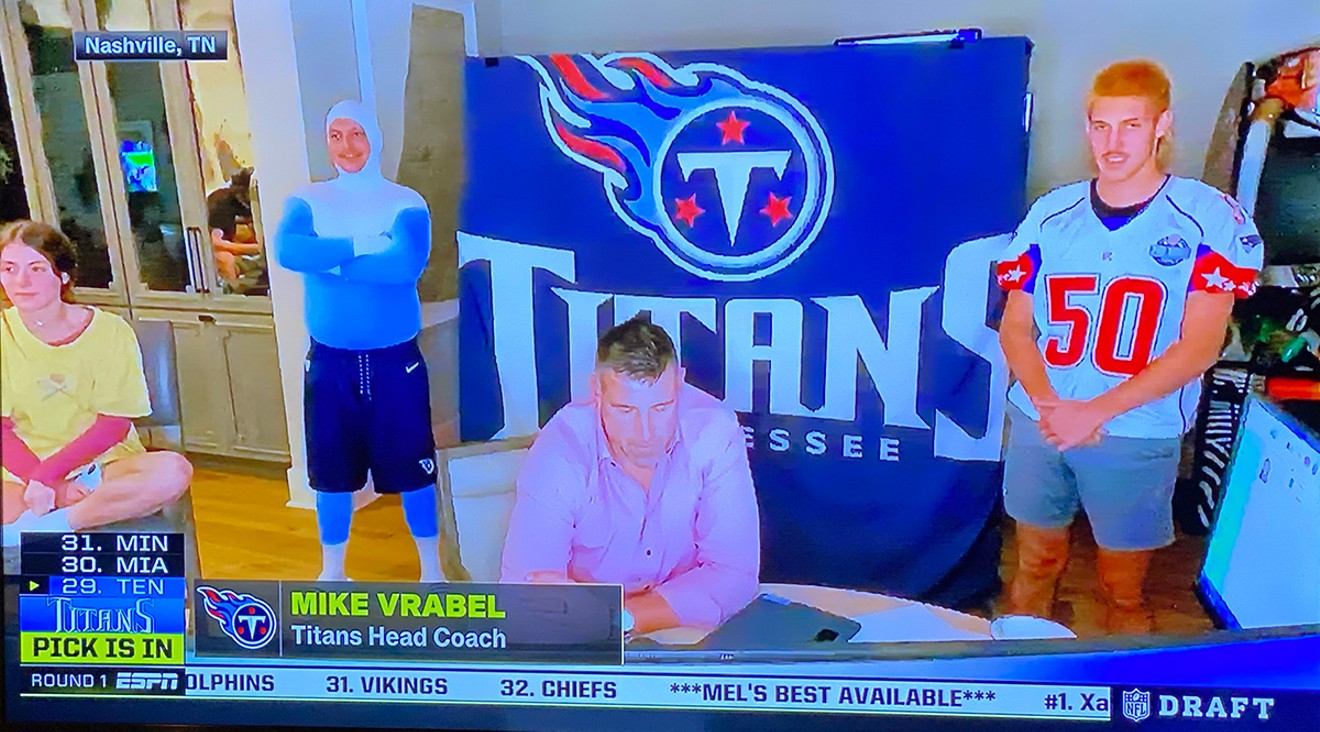 Whatever is going on at Mike Vrabel's house, we approve. Screenshot
The NFL Draft is one of the biggest spectacles of the sports year. But, in the era of COVID-19, things were a bit different. Gone were the red carpets, the bright lights, the crowds and in-person interviews. Instead, ESPN and the NFL Network jointly broadcast a socially distanced draft complete with camera setups for draftees, teams, analysts, the commissioner and even fans.

It had promised to be a night of serious glitz and glamor, the first held in Las Vegas where the Raiders will relocate for their first season there this year. Instead, it was a rather subdued evening with some moments of excitement, particularly from the draft picks and their families.

In the end, it worked quite well. Only the fans who were unable to attend probably missed out. For hardcore football junkies, the highlight packages and analysis were both on full display as usual. Here are some takeaways.

The execution from the NFL was nearly perfect.

A quick Google search will turn up embarrassing Zoom moments and tons of interviews interrupted by bad wi-fi connections. Even Tom Brady, while doing a virtual interview on the Howard Stern Show, lost his connection a couple times. But, there was nary a blip for the NFL. Considering the numerous locations and live set up, it was pretty remarkable to see if go off without a hitch.

On numerous occasions before calling out the next pick, NFL Commissioner Roger Goodell turned around to a large screen showing a bunch of smaller screens in a Brady Bunch/Hollywood Squares configuration and attempted to get them to yell for their team. Either it was staged and Goodell just isn't a very good actor or he is the most awkward cheerleader in the history of sports.

Everyone had great lighting...except Mel Kiper.

In the homes of several players, there were ring lights often used in selfies and personal videos. There was fairly obvious professional lighting for media members. Then there was Kiper. The veteran NFL Draft analyst looked like he was in a basement with an old lamp for lighting. His forehead was blinding and his eyes were hiding behind massive shadows that made him look more shifty than normal. Get a ring light, Mel!

Peering inside everyone's houses should be mandatory from now on.

Nothing was as fascinating on draft night as the ability to look inside the homes of team management, media members and young players. Whether it was the beautiful pink orchids behind football expert Daniel Jeremiah, the incredible abundance of leather sectionals  or all of the kids lurking in the background of general managers, peering into the personal worlds of these guys was amazing. The winners were Kliff Kingsbury's hyper-modern aesthetic including white leather sofa, Jerry Jones's, we assume, yacht(?), and Mike Zimmer's hunting lodge complete with roaring fire, dead animals on the wall and fire screen that said, "Zimmer Ridge Ranch." But nothing compared to whatever the hell was happening in the house of Titans coach Mike Vrabel, including perhaps someone, uh, taking care of business in the background. God bless you, man.
KEEP THE HOUSTON PRESS FREE... Since we started the Houston Press, it has been defined as the free, independent voice of Houston, and we'd like to keep it that way. With local media under siege, it's more important than ever for us to rally support behind funding our local journalism. You can help by participating in our "I Support" program, allowing us to keep offering readers access to our incisive coverage of local news, food and culture with no paywalls.
Make a one-time donation today for as little as $1.