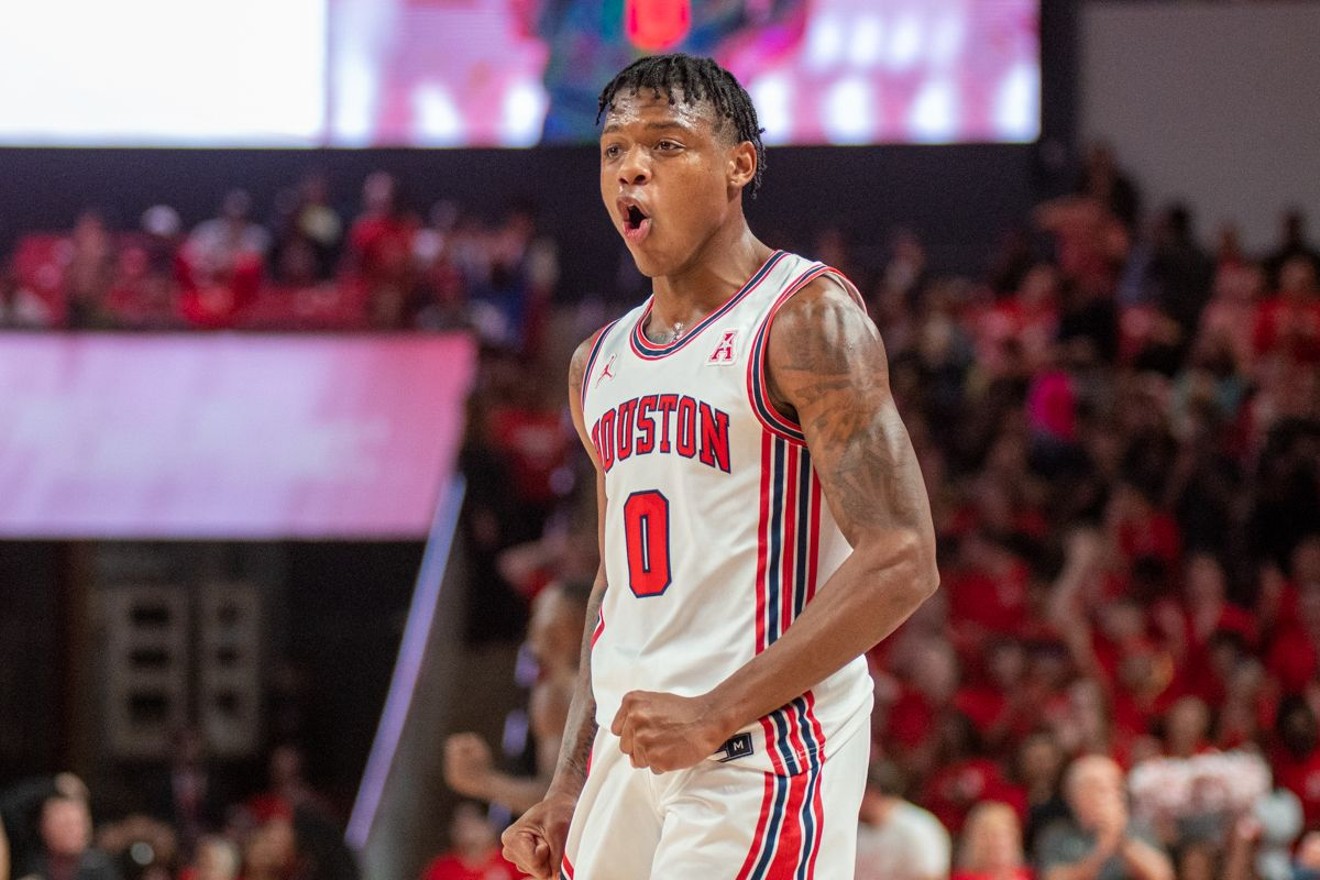 Marcus Sasser is one of the best guards in the country. Photo by Jack Gorman
The University of Houston men's basketball team was ranked tops in the country in the most recent Associated Press poll. At 7-0, the Kelvin Sampson-coached Cougars have become one of the best college basketball programs in America. Unfortunately, outside of football, few sports fans in Houston pay attention to college sports, basketball in particular.

But, if you were ever inclined to watch college basketball that isn't played during the NCAA tournament, this is the time and the best team is playing in your back yard. Here are a few things to know about the Coogs.

Marcus Sasser may be the best guard in college basketball.

This is not an overstatement. The 6-2 senior does everything well. He is a relentless defender and could easily average 20-plus points per game. At the moment, he's at just over 18 and rising. While his three-point percentage is down a little, he can hit from deep, but it is his ability to get into the midrange that makes him so tough. Sasser missed the tournament last year with a toe injury he suffered in December. Had he not gotten hurt, it's arguable that the Cougars could have not just gotten to the Final Four, but won it. His presence this season makes them a favorite in the tournament.

As if the Cougars couldn't get better, they add a top 10 freshman.

Jarace Walker was ranked tenth among all high school players in America when he committed to play at UH. He is already living up to the hype averaging over 10 points and 7 rebounds per game while shooting 42 percent from beyond the arc. The 6-8 power forward is exactly what the Coogs needed in an energetic, athletic big to help in the paint. Like all the players on this team, he thrives on defense, aided by his 7-2 wingspan. He has an NBA-ready body already and is a huge get for an already talented Cougar team. Coach Kelvin Sampson has completely turned around the UH men's basketball program.
Photo by Jack Gorman
Defense and hustle are their calling cards.

For several years now, UH has been the best or one of the best defensive squads in the country. They are relentless, hustling all over the floor and throwing themselves at loose balls while suffocating teams with their frenzied defense. While they are not the biggest team in college basketball, they make up for it with tenacity and an ability to switch defenders thanks to lateral quickness across the entire roster. They are a very easy team to root for because they leave it all on the floor every night.

Kelvin Sampson has turned the entire program around.

Since Guy V. Lewis and the days of Phi Slama Jama, the UH basketball program had floundered, falling from one of the best in the country to one of the worst. But that changed when Sampson took over in 2014 and backers like Rockets owner Tilman Fertitta put real money behind Sampson and the team. Since going 13-19 in his first season, the Coogs are 193-51. They have gone to four straight NCAA tournaments (it would have been five had the 2020 tourney not been canceled due to COVID) reaching the Final Four in 2021 and the elite eight earlier this year (that one without two of their best players). Sampson's style of defense-first coaching and preaching hustle has created a culture of success at UH that is difficult to replicate and the envy of many much larger and more storied universities.
KEEP THE HOUSTON PRESS FREE... Since we started the Houston Press, it has been defined as the free, independent voice of Houston, and we'd like to keep it that way. With local media under siege, it's more important than ever for us to rally support behind funding our local journalism. You can help by participating in our "I Support" program, allowing us to keep offering readers access to our incisive coverage of local news, food and culture with no paywalls.
Make a one-time donation today for as little as $1.