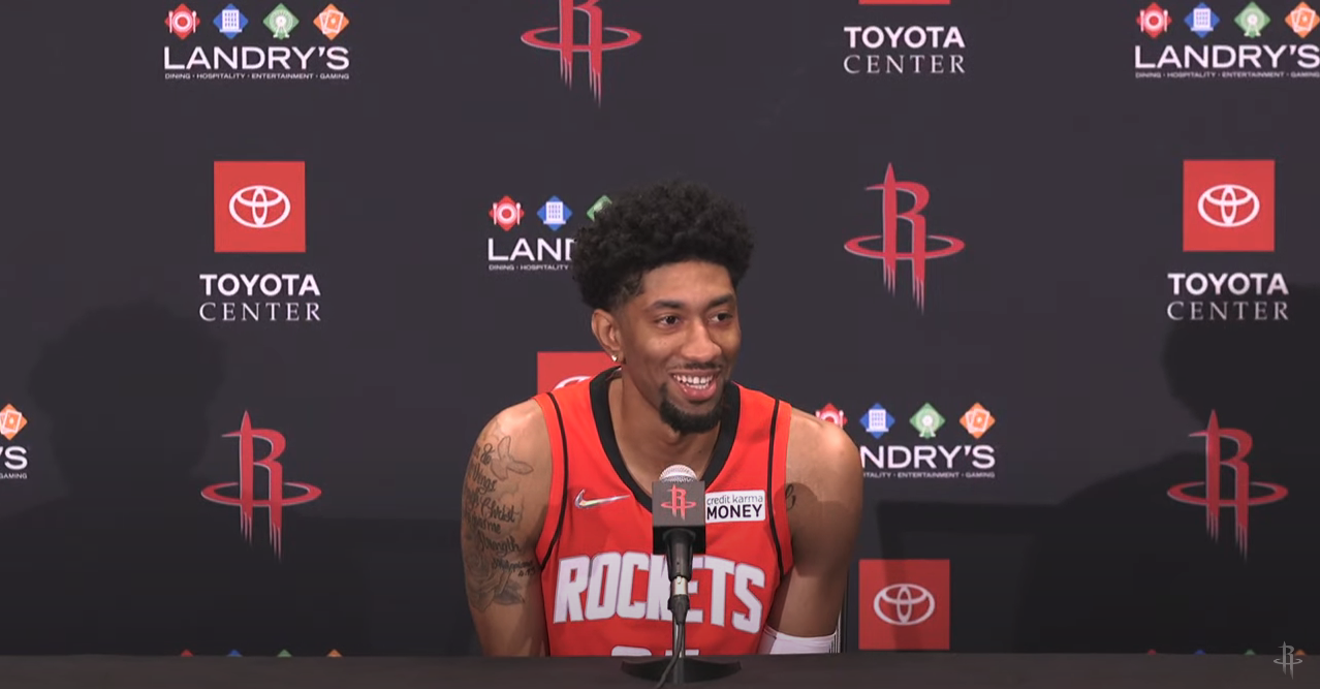 On Wednesday, the Rockets shipped Christian Wood to Dallas for a draft pick and players. Screenshot
Most NBA fans are locked into the Finals with the back and forth between Golden State and Boston. In Houston, fans are a bit more focused on the NBA Draft, which is just a week away. And, on Monday, the Rockets added to that draft night excitement by sending forward/center Christian Wood to Dallas for the 26th pick in the first round and a passel of players to match Wood's salary.

From the outside, this may feel like a giveaway. While Boban Marjanovic might be a fan favorite and Sterling Brown, Marquese Chriss (both former Rockets) and Trey Burke are all decent role players, this was clearly about the 26th pick in the draft. The Rockets now own picks 3, 17 and 26 and many have speculated that they would like to move up, perhaps even into the draft lottery to take an additional player. Combining 26 and 17 might allow them to do that.

Here are some thoughts.

Why trade your best scorer now?

Wood's was a complicated situation. Being the best scorer and clearly most accomplished player on a lottery team is a dubious distinction. At 27, he is already in or near his prime playing with a bunch of youngsters still at least a couple years away from competing for more than just pride. Plus, Wood's defense (or lack thereof) made it difficult to play alongside Alperen Sengun, someone the Rockets believe in. The combination of factors made it nearly a foregone conclusion that Wood would eventually be dealt.

Will the Rockets at least keep Boban?

Given that every player the Rockets acquired is signed only through next season, it certainly doesn't hurt their cap space (which should be significant) after this year. Boban (as he is affectionately called) might be the one guy who could stick around. The giant-eared, seven-foot-four behemoth is only 22 and could certainly provide some defensive help in the paint for a team that was nearly worst in the NBA in defending the rim last season. How he plays this year and how he gels with the other youngsters will likely determine if the Rockets will keep him.

Why not try for something more than this?

Reports are the Rockets are very happy with their haul. Wood is a free agent after this season and hoping for close to a max deal from whoever signs him, but there are still serious questions about his play. Can he play anything other than center? Will his defense ever improve? It leaves him as a bit of a question mark for teams considering inking him long term. For Dallas, this could be a great short-term fit for a team poised to make a push for a title. For the Rockets, it was the wrong guy at the wrong time.

Who are they targeting if they want to move up?

With 26 and 17, could the Rockets possibly move up to say, 14 or 15? If so, could they possibly snag someone like Tari Eason? If they were really serious and willing to move another future pick, it's possible they could get up to 10 or 11 and target Duke's Mark Williams, who is perhaps the best defensive big in the draft. Whatever the case, GM Rafael Stone clearly values the possibilities in this draft over what he had in Christian Wood.
KEEP THE HOUSTON PRESS FREE... Since we started the Houston Press, it has been defined as the free, independent voice of Houston, and we'd like to keep it that way. With local media under siege, it's more important than ever for us to rally support behind funding our local journalism. You can help by participating in our "I Support" program, allowing us to keep offering readers access to our incisive coverage of local news, food and culture with no paywalls.
Make a one-time donation today for as little as $1.