If Dusty Baker returns as manager, he'll need to improve his on field decision making. Photo by Jack Gorman
The Astros season came to a frustrating close after losing to the Braves in six games of the World Series. Three times the World Series has been closed out in Houston and all three times another team has claimed the trophy. In the end, it was a good season for the Astros. Great would have been another championship, but that loss cannot diminish what turned out to be a turnaround year after the brutal pandemic-shortened 2020 season.

There were certainly winners and losers this season and playoffs. Let's take a look.

Whatever you may think about the Astros skipper and his handling of a variety of things (more on that to come), he may have been the perfect replacement for A.J. Hinch after the sign-stealing scandal. At 72, the guy has seen virtually everything you can see on the field. Players love him and he keeps a peaceful clubhouse. Certainly having a cadre of veterans as part of the roster doesn't hurt, but Baker has been especially good at keeping younger players focused and on track. He salved a lot of wounds that could have led to a complete undoing of an incredibly talented team.

The Game 1 starter this year was Zack Greinke. Jake Odorizzi was brought in to help fill a gap in the rotation. Neither started in the World Series. That is because in addition to Framber Valdez and Jose Urquidy, the Astros pulled Luis Garcia out of a hat. In the lineup, Kyle Tucker and Yordan Alvarez were two of the best and most consistent bats the team had. And the team discovered a handful of solid center field replacements for George Springer in Chas McCormick, Jose Siri and Jake Meyers, the latter of whom was their best defensive outfielder until a shoulder injury sidelined him. Despite not being one of the most highly ranked farm systems in the majors, the Astros keep finding talented young players and getting them to the majors.

Three big contracts will come off the books this offseason. Two of them are expected in Zack Greinke's $35M and Justin Verlander's $33M. The other is Carlos Correa ($11M), who it is widely believed will depart via free agency. While that last one is going to sting...a lot, the combination of those salaries leaves a ton of money to spend in the offseason without pushing up against the luxury tax. Given that they have some potential shortstop options in Aledmys Diaz and prospect Jeremy Peña, who was moved up to Triple A this season, they might be able to get by without spending big on an infielder. They also seem fairly well set in the bullpen. Where they do need help is in the rotation and there are some very good starters on the market.

Batting champ Yuli Gurriel will be back with the Astros next year.
Photo by Jack Gorman
Yuli Gurriel

What an incredible season for Gurriel, who won the batting title at 37 and is on the short list for his first gold glove. La Piña just seems to get better with age. His power numbers dropped back down around his career average after jacking 31 in 2019, but his consistency at the plate continues to make him one of the most dangerous hitters in baseball. And he has turned into one of the better infielders in the AL at first base. He shows no signs of slowing down and the Astros, recognizing his continued excellence, announced Friday he will return for another season with the team.

For all of his calming wisdom, Baker can sure make some head scratching decisions on the field. He did seem to settle in during the postseason, but his penchant for either pulling pitchers early or leaving them in too long during the season was often confounding. Give him credit for incorporating some of the team's cutting edge analytics into his approach, but in-game management was not his strong suit. If he returns, let's hope that improves. 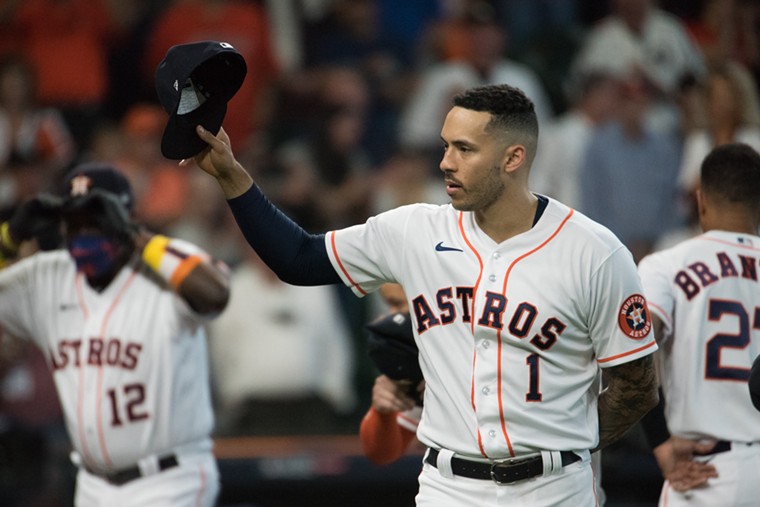 Carlos Correa is likely waving goodbye to Houston fans this offseason.
Photo by Jack Gorman
People who want to bring back Carlos Correa.

For those who really love Carlos Correa as an Astro, it's going to be a tough offseason. The Astros are more than willing to pony up huge money to keep the star shortstop, they just don't seem to want to give him a contract that is as long as he wants. Correa appears to be insisting on a 10-year deal, but the team is unlikely to go more than seven. It may hurt, but it's the prudent move given how much salary Correa would tie up for a decade and how his injury history makes that a very iffy proposition. Still, the guy many on the team consider the heart and soul of the ball club leaving is going to seriously sting.

There is no doubt that the best offense in baseball simply was not that once they got into the postseason. They continued to have big moments in the first two series, but by the time the World Series came around, they had a power outage. To get shut out in the final game and only have two home runs the entire series was an anomaly that might not happen again if you were to replay that series 100 times. Still, it came at an awful time and they will be in the batting cages trying to figure that out all winter.

Speaking of power outages, something was clearly not right with the Astros third baseman this season. He only played 91 games, missing a chunk of time with a quad injury. But even when he returned, he was not himself. His WAR went from a 9.0 in 2019 to a 2.1 this year and his average dropped more than 20 points. He struck out a lot more and walked a lot less. He was just not the guy we are used to seeing at the plate. Bregman remains outstanding in the field, but he will need to get healthy or rediscover his hitting mojo before spring training.
KEEP THE HOUSTON PRESS FREE... Since we started the Houston Press, it has been defined as the free, independent voice of Houston, and we'd like to keep it that way. With local media under siege, it's more important than ever for us to rally support behind funding our local journalism. You can help by participating in our "I Support" program, allowing us to keep offering readers access to our incisive coverage of local news, food and culture with no paywalls.
Make a one-time donation today for as little as $1.