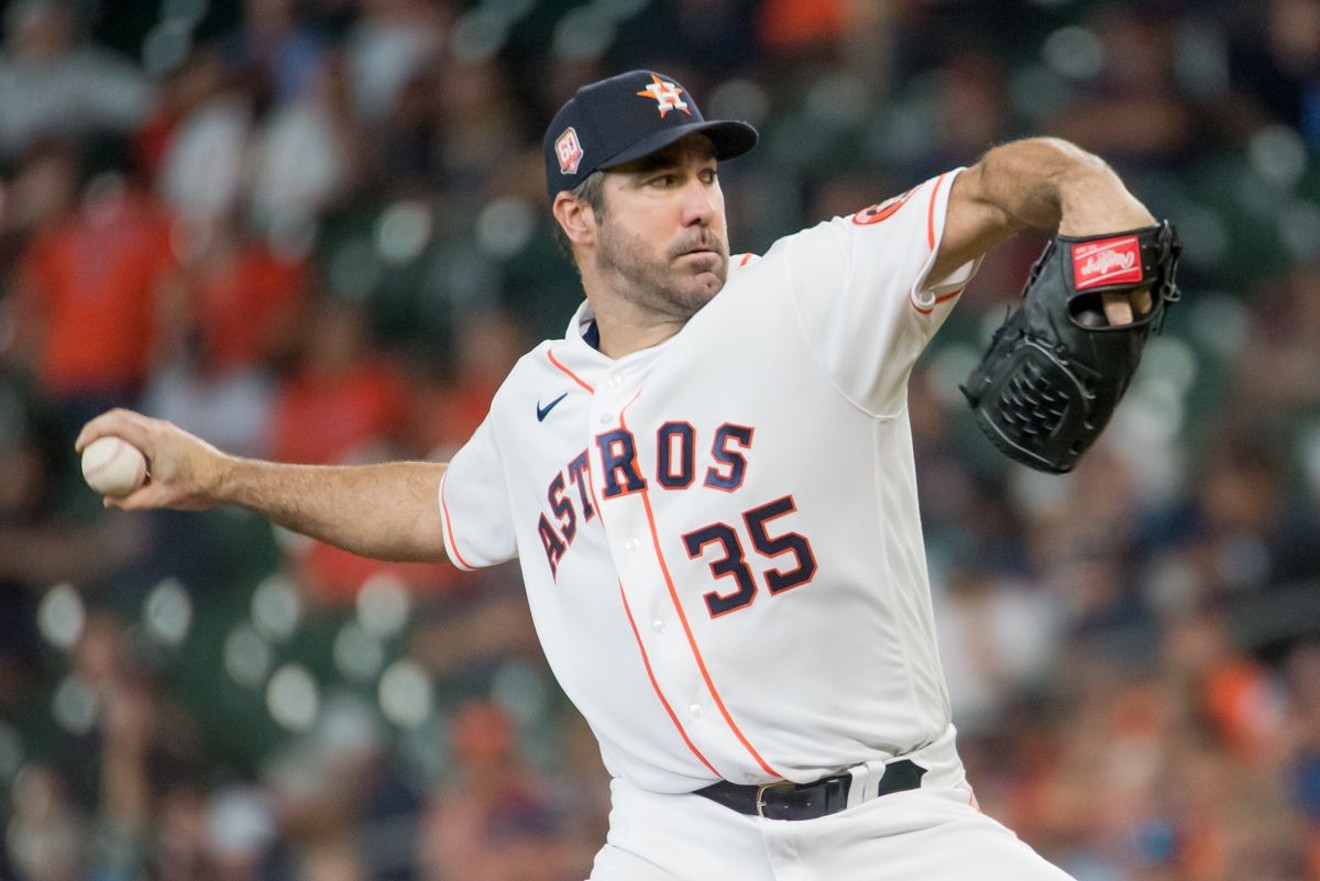 It was a rough outing for Justin Verlander last Friday. Photo by Jack Gorman
Heading into what was supposed to be a softer spot in the schedule — despite the 32 games in 33 days — we saw a few strange things. The Astros saved themselves from an embarrassing sweep in Seattle, yet still climbed four games ahead of the Angels for first place in the AL West. Along the way, Kyle Tucker hurt his foot (word is, he should return shortly), Jose Urquidy fell back to earth and Justin Verlander had a tough outing.

Along the way, the bats did what the bats have been doing, which is to say not a whole lot. With more (alleged) creampuffs over the next week, the Astros still have a chance to pad their record...assuming they can get a hit when they need it. Let's talk about the week.

If you cut Justin Verlander, he does indeed bleed.

We all wanted to believe that Justin Verlander was superhuman. All evidence pointed to that. Not only was he the best pitcher in baseball at 37-year-old, but he was doing it coming off two years missed after Tommy John surgery. None of those things make any sense unless you are Verlander, who seems to defy age the way Nolan Ryan did when he was firing fastballs and throwing haymakers well into his 40s.

But, on Friday in Seattle, he gave up four home runs and saw his ERA jump to over 2.00 for the first time this year. Verlander has not been immune in the past to giving up the long ball. Anyone who lives around the strike zone as he does (in the game, he struck out six and only walked one) is going to have an occasional night like this one, but Friday certainly felt like an aberration, particularly against the Mariners.

Is it time to move Jeremy Peña up the pecking order?

There has been much talk about moving the current Astros best hitter, and rookie shortstop Peña, up in the lineup, particularly with reigning AL batting champ Yuli Gurriel struggling through 40-plus games. But Astros manager Dusty Baker quelled any thoughts of such a shift in the lineup saying he expects his veteran first baseman to come around. "I thought about it. But just not yet. The last thing you want to do is act like you’re panicking," Baker said. "As we wait on some of these guys to do what they’re capable of doing, we’re still in first place. One thing I don’t know how to do from being in the Marines is panic."

Still, with the Astros scoring a grand total of 10 runs in the last five games (five of those on Monday afternoon), it does beg the question: How long should Baker wait? Though it isn't like Gurriel is the only one struggling in the box right now. The good news is, even in the seven hole, Peña continues to hit with power and purpose. If the status quo continues, eventually, the Astros manager will be forced to make a move he is avoiding for the time being. 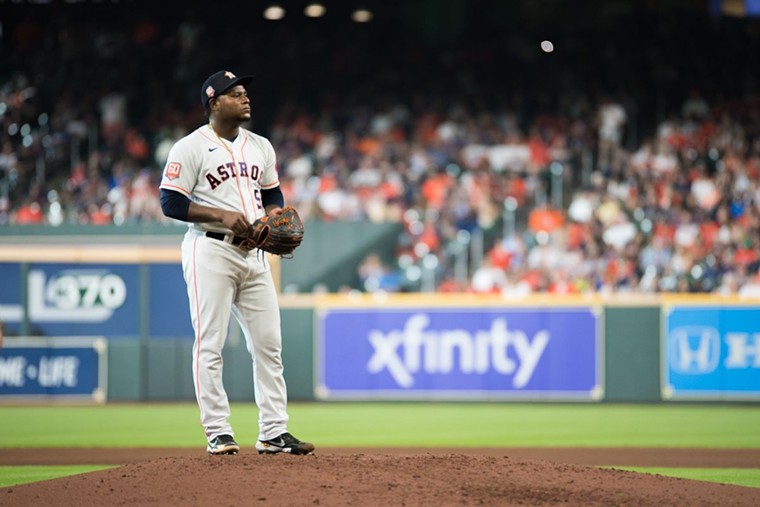 With Verlander's hiccup, the most consistent pitcher in the Astros starting rotation remains Valdez, who threw a two-hit, one-run complete game on Monday. He was never in trouble and continued his ground ball mastery. He didn't allow a hit through five innings and had the curve ball working about as good as he has all year.

This is nothing new for the lefty starter. As we mentioned last week, Fan Graphs detailed Valdez's historic season, noting how far he is ahead in his ground-balls-to-fly-balls ratio. Right now, 20 percent of his outs are on grounders. The next nearest pitcher is at 10 percent. If he continues to command his pitches and stay in the zone, he is going to remain the team's best pitcher even with that JV guy in the clubhouse with him.

What to do when you cannot score.

The Athletic's Jayson Stark had a phenomenal breakdown (subscription required) of MLB's first 40 games of the season, a typical benchmark for where the league might be going forward. Some of that is colored by the lockout and the fact that players are just now rounding into form, but some of the numbers relating to scoring are eye popping.

Runs and opposite field homers are way down. Strikeouts per home runs are way up. And, of course, the baseball remains a problem. Balls are traveling a lot less distance, which even affects where outfielders play, which has drastically limited doubles and triples. The Astros are certainly not immune to those issues — this is a team that often lives and dies by the long ball — but it has been a particularly rough year at the plate for the 'Stros.

They are 24th in batting average, but fourth in homers. They are 10th in slugging and 12th in OPS, but only 19th in on-base percentage. They still are near the league leaders in walks and fewest strikeouts, but it feels like they are having to manufacture runs where they once came in bunches. That is illustrated by their 198 runs, a stat tied for 17th. Will it last? Who knows? But, if they are going to be elite, something will have to give.

The Astros got off on the right foot with a 5-1 win in Oakland Monday. They have two more against the bottom-dwelling A's before heading to Kansas City to face another of the AL's worst teams. If you want to gaze out a bit farther into the schedule, they get back home next week to hopefully right some wrongs against the Mariners and then face one of the NL's worst in the Marlins.

In fact, it isn't until mid-June when they take on the White Sox that they face a team currently at or above .500 and Chicago is currently 23-23. They better get some W's while they can because immediately following that Sox series, they have a wonky schedule with nine games against the Mets and Yankees followed by a home series against the Angels.
KEEP THE HOUSTON PRESS FREE... Since we started the Houston Press, it has been defined as the free, independent voice of Houston, and we'd like to keep it that way. With local media under siege, it's more important than ever for us to rally support behind funding our local journalism. You can help by participating in our "I Support" program, allowing us to keep offering readers access to our incisive coverage of local news, food and culture with no paywalls.
Make a one-time donation today for as little as $1.