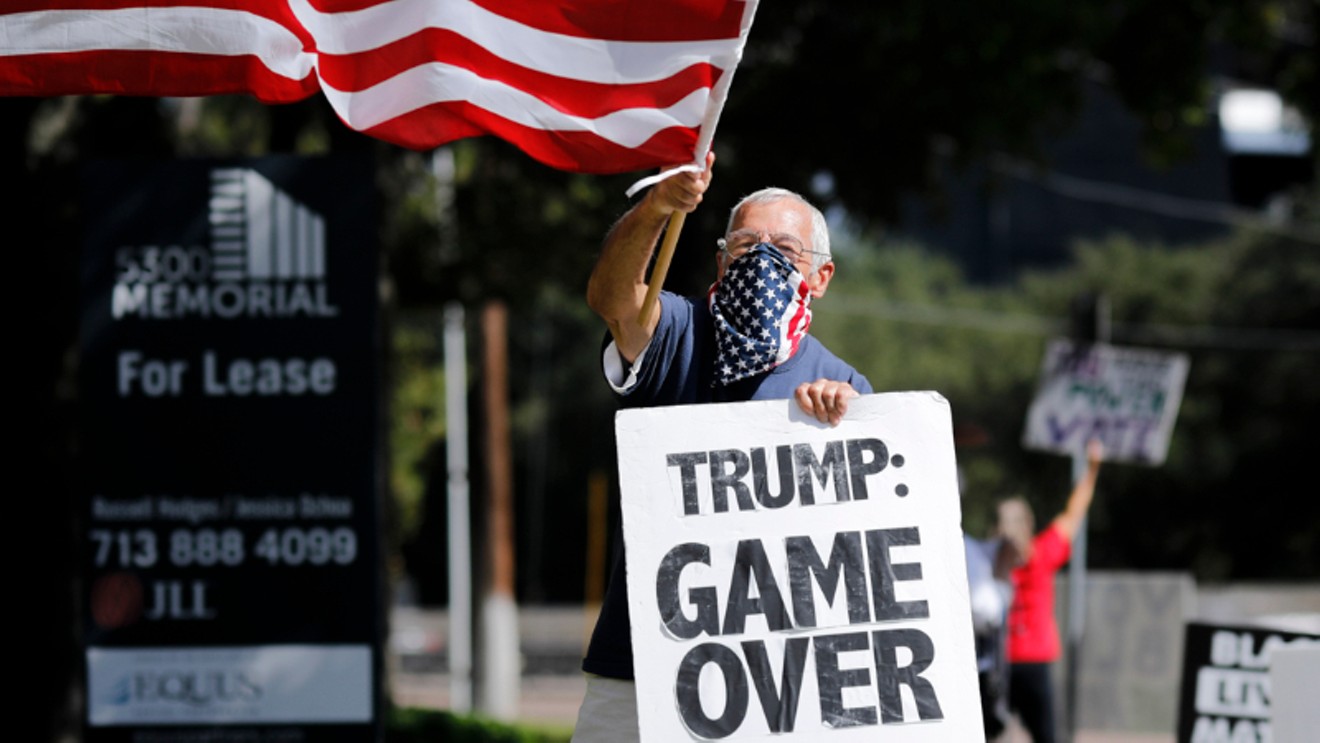 This anti-Trump Election Day protester can finally celebrate, as Joe Biden has been projected to win the presidency. Photo by Reggie Mathalone
On Saturday, former Vice President Joe Biden was finally projected by the Associated Press and all major media outlets as the winner of the 2020 presidential election following over three long days of vote counting, beating out President Donald Trump after a contentious, bruising campaign during one of the most tumultuous years in American history.

The state that put Biden over the hump was Pennsylvania, as its 20 electoral votes were projected for the Delaware Democrat by the AP on Saturday morning. That put Biden at 284 votes in the Electoral College, well ahead of the 270 needed to be named President-elect even with final results still pending in several states.

The U.S. news media warned for weeks that the unprecedented number of mailed ballots cast this year due to the coronavirus pandemic would likely extend vote counting far past Election Day. That prediction was spot-on; Although Trump clinched big early wins in Texas and Florida, neither candidate was able to accrue enough electoral votes to declare victory outright on election night, and the vote counting continued from election night on Tuesday well into the weekend.

The AP called Wisconsin and Michigan for Biden on Wednesday, huge victories in two traditionally blue states whose red flip to Trump in 2016 cemented his victory over Hillary Clinton that helped solidify the former vice president’s lead.

Over the next few days, Biden slowly but surely ate away at Trump’s vote advantage in Georgia and Philadelphia, as mail-in ballots that skewed heavily in Biden’s favor were finally counted.

By Wednesday night, Biden had already won 264 electoral votes according to the AP, just six shy of the 270 needed to clinch the presidency. By Friday afternoon, over 74 million votes for Biden had been counted, more votes than have ever been cast for any U.S. presidential candidate, and Biden was ahead of Trump in Nevada, Pennsylvania and Georgia, trends that if held true would have left Trump with slim to no chance of winning out in the end.

Also historic is that Biden’s running mate Sen. Kamala Harris will be the country’s first female Vice President, as well as the first Black person and the first person of Indian descent to hold that office.

Biden’s projected victory comes after his third race for the presidency, and was far from a certain outcome going into 2020. His campaign started off rocky with an embarrassing fourth place finish in February’s Iowa caucus, but after a decisive victory in the South Carolina primary, he was able to hold on and win key endorsements from other moderate Democrats in the field to eventually rally enough support to beat out his left-wing rival Sen. Bernie Sanders for the Democratic nomination.

Trump’s chances for re-election looked rosier back in February when the economy was doing relatively well and he had just been acquitted in his impeachment trial. But his administration’s disastrous handling of the COVID-19 pandemic didn’t help his already uninspiring approval numbers amid a crisis that has killed over 230,000 U.S. residents.

It seems unlikely that Trump will quickly concede to Biden given the unhinged speech he delivered at the White House Thursday night, during which he gave an exhausted sounding rant full of enough blatant falsehoods about the election being rigged by evil Democrats to give any honest fact-checker an aneurysm.

In his speech Thursday and in a litany of tweets over the past several days, Trump repeatedly made false claim after false claim that vote counting efforts in Pennsylvania, Georgia, Wisconsin and Arizona were supposedly rife with fraud. He’s repeatedly and baselessly accused Democrats of making a concerted effort to steal the election from him, which is pretty funny given how poorly so many Democratic U.S. House and Senate candidates performed across the country — if Democrats were truly rigging the election, wouldn’t they at least want to make sure their party took control of the Senate and didn’t lose seats in the House?

Trump’s lawyers have asked for a recount in Wisconsin, but it’s unclear if Trump will actually pony-up the cash to pay for it as required by state law. Even if a recount happens, past Wisconsin recounts have shifted vote totals by around 100-200, and Biden leads Trump there by over 20,000 votes. There will also likely be a recount in Georgia due to how close it looks like the final vote tally will be, which would be funded by the state government.

The Trump team has also filed multiple lawsuits to try and stop votes from being counted in Georgia, Pennsylvania and Michigan. Two of the suits, in Georgia and Michigan, have already been dismissed. Election law experts have called these lawsuits frivolous and without merit, so there’s likely not much of a chance that the courts step in and save the president from defeat.

Here’s hoping that Trump doesn’t triple-down on his crazed insistence that the race has been stolen from him in the days ahead, or else it’s going to be a long, scary march to inauguration day in January.

And if Trump digs in his heels and refuses to admit he lost?

“As we said on July 19th, the American people will decide this election,” said Biden campaign spokesperson Andrew Bates on Friday. “And the United States government is perfectly capable of escorting trespassers out of the White House.”
KEEP THE HOUSTON PRESS FREE... Since we started the Houston Press, it has been defined as the free, independent voice of Houston, and we'd like to keep it that way. With local media under siege, it's more important than ever for us to rally support behind funding our local journalism. You can help by participating in our "I Support" program, allowing us to keep offering readers access to our incisive coverage of local news, food and culture with no paywalls.
Make a one-time donation today for as little as $1.