City of Houston workers and volunteers ran a mass water giveaway Friday as the city remains under a boil water notice. Photo by Doogie Roux
With the worst of winter’s wrath finally behind us, most Houston area residents now have power and heat as one of the most trying weeks in recent memory nears its end. However, access to water remains a widespread problem.

And as residents begin the long, hard recovery process, the tragic toll of this catastrophic cold spell becomes more apparent each day.

Cristian Pavon, age 11, died Tuesday morning in his freezing Conroe home.
Screenshot
The Houston Chronicle has reported that at least 25 people have died this week across Harris, Galveston and Brazoria counties due to the devastating winter storm.

On Tuesday morning, 11-year-old Cristian Pavon was found lifeless in bed inside his powerless Conroe home, his family wrote on a GoFundMe page set up by the deceased boy’s relatives. The fundraiser’s organizer wrote that the donations will be used to send Pavon’s body back to Honduras, his family’s home country, where he longed to return one day to see his grandparents.

The Harris County Institute of Forensic Sciences disclosed on Thursday that at least four Harris County residents died from hypothermia this week. According to the Chronicle, one of them was Crosby resident Carrol Anderson, a 75-year-old Vietnam vet who froze to death in his truck, which he was using to power an oxygen tank since his home had no electricity.

Another county resident who perished in the cold was an adult man found dead with no shoes and socks in a parking lot near Aldine, Harris County Sheriff Ed Gonzalez tweeted Thursday.

A Sugar Land woman and three of her grandchildren died in a house fire Tuesday morning; ABC13 reported that their home was without power and a fireplace burning is expected to have caused the fatal blaze.

There have also been hundreds of local carbon monoxide poisonings caused by bone-chilled residents warming their homes with dangerous outdoor heating equipment like barbecue grills or power generators running indoors. Two Houston residents — a mother and her child — died due to the noxious invisible gas after running the family’s car in a closed garage on Tuesday.

Locals lucky enough to have survived these past few frozen days lined up to receive much needed safe drinking water at a city water distribution event at Delmar Stadium on Friday morning. It’s a crucial bit of relief as millions of Texans — including most of the city of Houston — are still under notice to boil water before drinking due to water quality concerns spurred by burst pipes and low water pressure across the state. 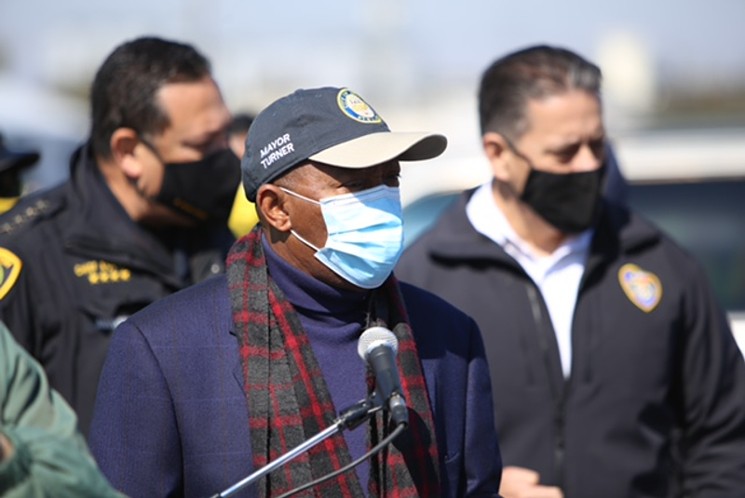 “The goal is to try to be in a position to come out of this boil water notice Monday. That’s the goal… maybe a day or two either way, but that’s the goal,” Turner said.

Public Works Director Carol Haddock said that even though local water pressure has hit the level the state requires for safe consumption in most parts of the city, there are still a few spots where pressure is lagging behind. Once the entire city has hit that water pressure milestone, that pressure has to stay stabilized for several hours before water samples can be taken and sent to the Texas Commission on Environmental Quality, and TCEQ then needs 24 hours to make sure that the water is safe to drink.

Update 4:14 p.m.: On Friday, TCEQ executive director Toby Baker said that more than 1,000 of Texas' approximately 7,000 public water systems have issued boil water notices "due to lack of power and frozen and broken pipes." Over 14 million Texans are affected, up from 13 million on Thursday.

Update 5:40 p.m.: Houston ISD has announced that all its schools and offices will remain closed through Tuesday, February 23. Students will transition to virtual learning on Wednesday through Friday. Regular, in-person instruction will resume on Monday, March 1. 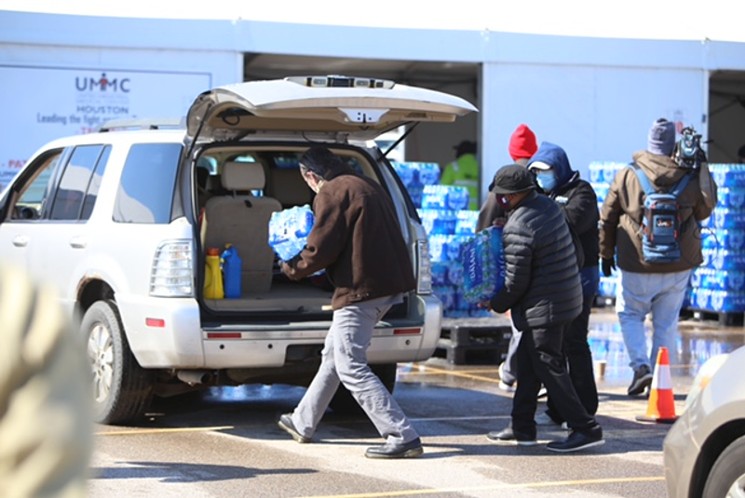 Houstonians picked up free water at Delmar Stadium Friday.
Photo by Doogie Roux
In an appearance on MSNBC Friday morning, Turner said that he hasn’t spoken with Gov. Greg Abbott at all during this crisis. The phone works both ways, of course, but it is difficult to understand why the governor wouldn’t dial-up the mayor of the largest city in his state during a disaster of this magnitude.

When Turner was asked at Friday’s press conference if he’s attempted to reach out to Abbott himself, the mayor didn’t answer; He only said he had been “laser-focused” on local relief efforts, but did make sure to mention President Joe Biden’s administration has reached out to him “several times” this week.

Turner then announced that his office was told Biden “will sign the major [disaster] declaration today,” and that Biden’s administration “indicated that the president intends to be visiting Texas soon.”

In response to the power grid failures that left millions of Texans and over a million Houston area residents without power (many for days on end), Turner reminded everyone that back when he was in the Texas House in 2011, he filed a bill that if passed would have required ERCOT (the Electric Reliability Council of Texas) to keep dedicated power reserves on hand to prevent blackouts from serious weather events.

“That bill never got a hearing… and it would have prevented what has happened across the state this week,” Turner said, before asking state legislators to “dust-off my bill and re-file it.”

Houstonians suffering from damage like burst water pipes and caved-in ceilings during the storm can expect assistance from a city relief fund that Turner said is currently being set up. The fund will prioritize assisting city residents “who were already on the margins” before this awful weather.

“As the lights come on and the water pressure goes up,” Turner said, “we want to be sensitive to the fact that for many of these individuals… they will be in crisis mode for weeks and months to come, and we have to be very focused on doing everything we can to assist these persons, these families, within our city.” Two prominent former Houstonians who’ve already reached out to contribute to those efforts are former Houston Rockets James Harden and Russell Westbrook, Turner announced.

Turner thanked the city employees and volunteers who worked overnight to get Friday’s water giveaway up and running, and got a few shots in at those critics who claim government should stay out of people’s lives as much as possible but change their tune when a disaster strikes.

“So as much as people talk about and against the government, government is bad until you need it,” Turner continued. “And then when you need it, you want it to show up.” 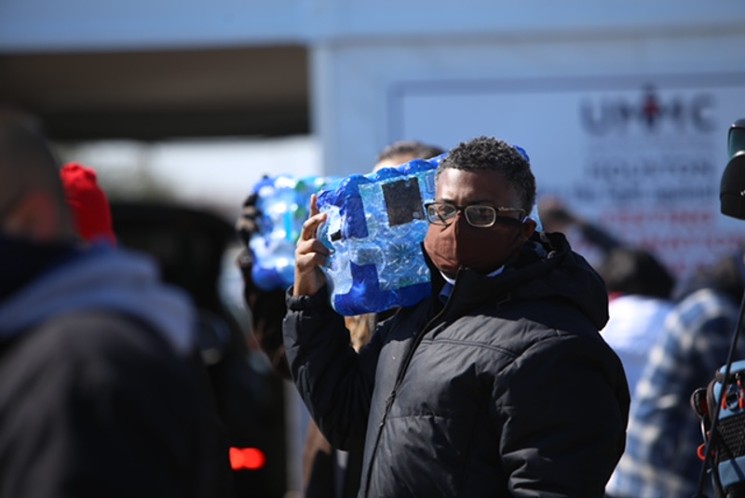 Helping our neighbors, one case at a time.
Photo by Doogie Roux
click to enlarge 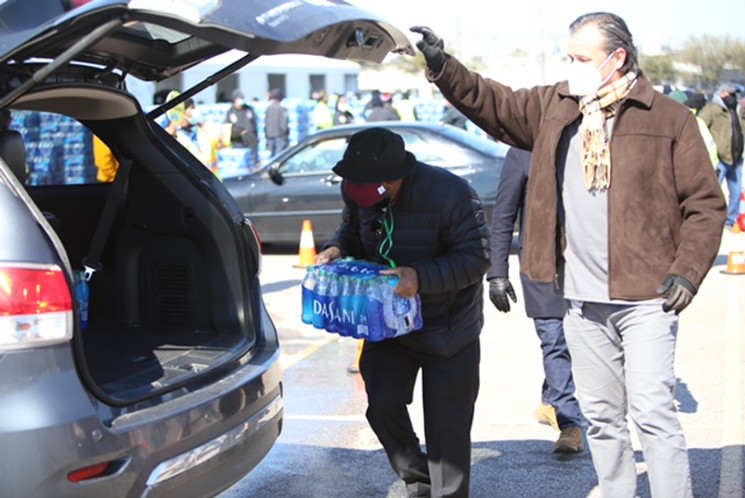 Safe drinking water is in short supply these days.
Photo by Doogie Roux
KEEP THE HOUSTON PRESS FREE... Since we started the Houston Press, it has been defined as the free, independent voice of Houston, and we'd like to keep it that way. With local media under siege, it's more important than ever for us to rally support behind funding our local journalism. You can help by participating in our "I Support" program, allowing us to keep offering readers access to our incisive coverage of local news, food and culture with no paywalls.
Make a one-time donation today for as little as $1.