Thanks to the “still raging wildfire” of COVID-19, Harris County Judge Lina Hidalgo said that area schools will have to stay online-only through Labor Day, and possibly longer.

Hidalgo and Houston Mayor Sylvester Turner announced Friday that Houston and Harris County Local Health Authorities Dr. David Persse and Dr. Umair Shah would sign a joint public health order that requires all public and non-religious private schools within Harris County to stay closed for in-person classes until at least September 8 due to the ongoing spread of the coronavirus locally.

“The last thing I want to do is shut down a brick and mortar representation of the American dream. But right now, we’re guided by human life,” Hidalgo said.

The order to be issued Friday will forbid all in-person extracurricular activities and requires each affected school system to create a written plan that includes health and safety protocols for resuming in-person instruction and extracurriculars to be submitted by August 21.

Hidalgo stressed that September 8 was still an optimistic timeline for returning to in-person instruction, and that even if COVID-19 metrics improve significantly between now and then, schools would still return to in-person instruction in a phased manner instead of bringing 100 percent of students back into the classroom all at once.

Recently issued guidance from the Texas Education Association said that school districts ordered by their local health authorities to offer only online classes for the foreseeable future would still be able to receive state funding. Previously, the TEA was requiring that schools would have to provide in-person instruction five days a week for all families who wanted it.

Friday’s order only affects non-religious schools due to guidance issued by Texas Attorney General Ken Paxton last week that prohibits government entities from telling religious schools when they can or can’t reopen, but Hidalgo said she hopes that the religiously affiliated schools within Harris County will follow suit with the county-wide order.

Hidalgo reported an additional 552 COVID-19 cases and five more deaths outside the City of Houston in Harris County on Friday, and announced that on Thursday the county reached “another grim milestone” by reaching a cumulative total of 61,416 confirmed COVID-19 cases between Houston and the rest of Harris County. Turner said that on Thursday, the Houston Health Department reported 919 new COVID-19 cases and 11 more deaths within Houston, putting the City’s cumulative case count at 39,435 and the Houston death toll at 357. 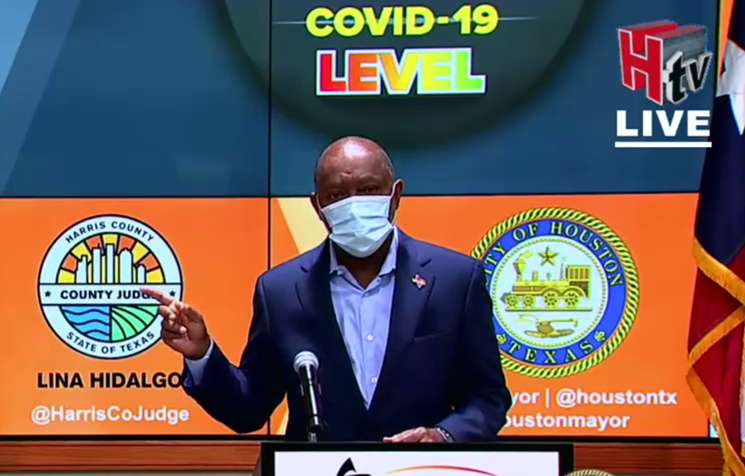 Turner said he believes that local officials “should be very careful about talking about sending our children, teachers and staff back for in-person instruction when the virus is still spreading uncontrollably within our community,” citing the exponential increase in coronavirus deaths over the past several months — four deaths in all of March compared to 133 in July so far within Houston.

He also cited the City’s current COVID-19 positivity rate that continues to hover in the 20-25 percent range as proof that Houston has a long way to go to curb the spread of the coronavirus, compared to rates under 5 percent in Boston and New York City, two cities that have managed to get the virus under control for the most part despite suffering serious outbreaks early in the pandemic.

Persse shared an anecdote about how on Friday morning during a shift supporting Houston firefighters, he managed two cardiac arrest cases of Houstonians sick with COVID-19 who likely wouldn’t survive, driving home the human cost of the pandemic.

He revealed that all of the family members living with those two Houstonians were also infected with COVID-19, showing how rapidly the virus can spread within a household. “Both of those people were awake at some point this morning, and collapsed at home with their families,” Persse said.

Shah made clear that despite rumors to the contrary, “kids can get COVID-19,” that they can spread the virus to their families and school staff even if they have mild or no symptoms and can still face serious illness from the disease.

“This is not the time that we take the 900,000-plus students in Harris County and say ‘Go back to school in Harris County because it’s safe.’ It’s not safe, and that is the reason why Dr. Persse and I are signing this Local Healthy Authority order today,” Shah said.

Friday’s order for Harris County schools came on the heels of revised school reopening guidance issued by the CDC. In a two-week span, the federal agency went from urging caution about the possibility of the rampant spread of COVID-19 by students in schools that reopened too soon to downplaying the risk of COVID-19 to students and stressing the importance of getting kids back into classrooms as quickly as possible.

Zeph Capo, President of the Texas American Federation of Teachers, the state union branch that represents 65,000 education professionals, said Friday that he’s convinced the CDC succumbed to pressure from the White House to issue a more rosy outlook recommending a return to in-person education, a priority that President Trump has publicly pushed for despite the scientific consensus around the major risks involved.

“Amazing, isn’t it, how in two-weeks time the CDC can go from an internal document noting the high risk of school reopenings to now saying it’s perfectly safe to push millions of kids back into classrooms,” Capo said.
KEEP THE HOUSTON PRESS FREE... Since we started the Houston Press, it has been defined as the free, independent voice of Houston, and we'd like to keep it that way. With local media under siege, it's more important than ever for us to rally support behind funding our local journalism. You can help by participating in our "I Support" program, allowing us to keep offering readers access to our incisive coverage of local news, food and culture with no paywalls.
Make a one-time donation today for as little as $1.