Four Teams That Might Steal George Springer This Offseason 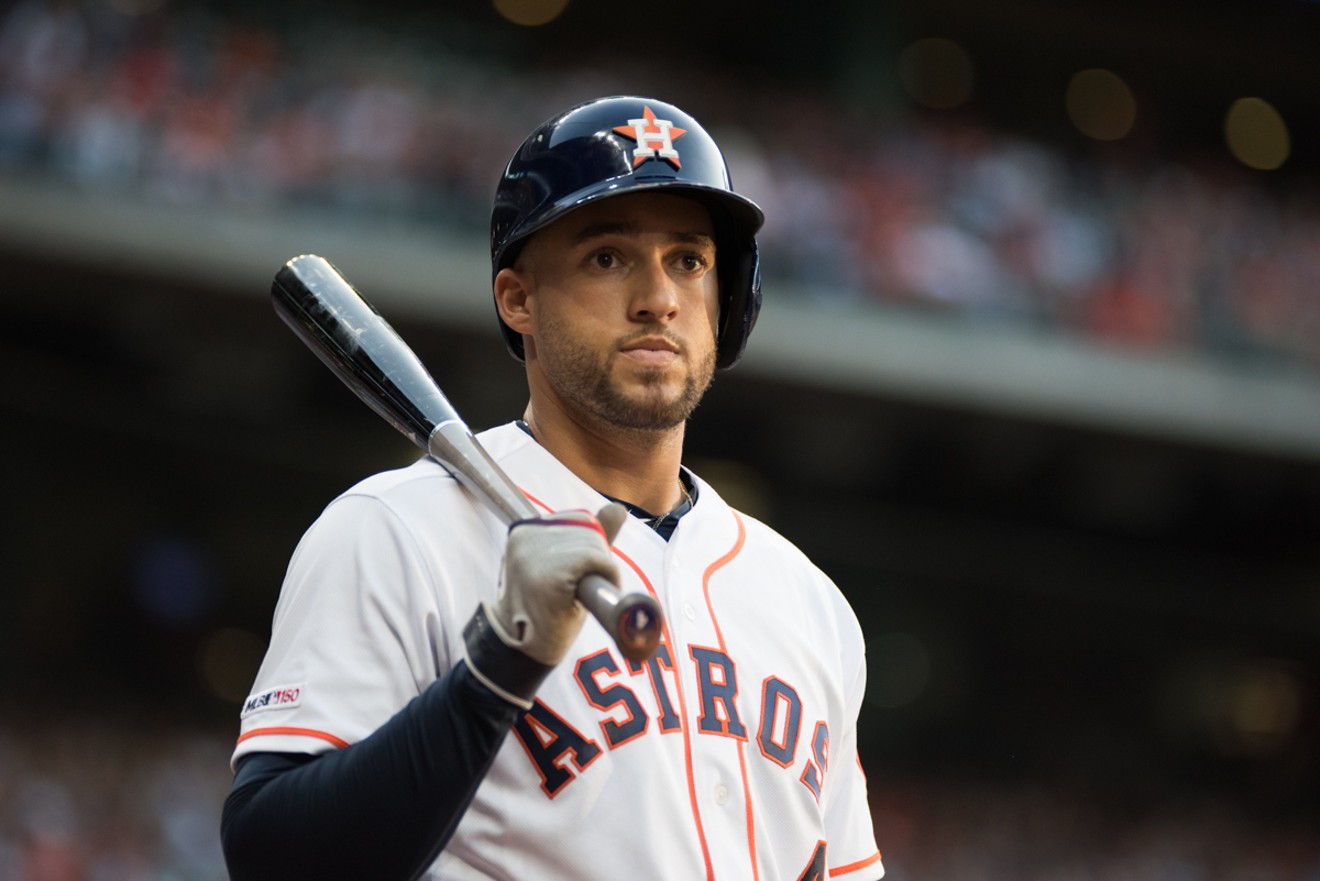 George Springer stands on deck at Minute Maid Park. Photo by Jack Gorman
This past Sunday, the Astros beat the Diamondbacks in what, on the scoreboard and in the standings, looks like a fairly innocuous, insignificant game. The Astros were already a near lock for the postseason before the weekend started, and at this point, they're probably more worried about keeping (and getting) guys healthy than about actually winning baseball games.

However, that 3-2 victory on Sunday included two home runs from George Springer, one inside the park and one conventional over-the-fence style, and it served as a stark reminder that, indeed, that game on Sunday might wind up being VERY significant, because they will not be back in Minute Maid Park again this season, even if they go to the World Series. The wild card round is being played fully in the parks of the higher seeded team (which won't be the Astros in their series), and the divisional, league, and World Series championship rounds are being played in neutral site bubbles, for COVID reasons.

So, this past Sunday could very well be George Springer's last game in an Astro uniform in Minute Maid Park, as the 31-year-old outfielder is set to hit free agency after the season is over. It remains to be seen what the market will look like for Springer, who's cranked his game back up a few notches over the last couple weeks. With Mookie Betts signing a gargantuan, nearly $400 million extension with the Dodgers, Springer is likely the top outfielder on the market.

The issues for Springer in breaking the bank in free agency are pretty simple — age (he is four years older than Betts), injury history (his rugged style of play seems to lead to at least a few weeks missed per year), and a likely tepid market with teams still hurting from COVID-impacted revenue streams, i.e. no fans in the stands.

There is little doubt that Astros fans would want Springer back. In fact, I put it to them this way on Twitter several weeks ago:


#Penderpoll for ASTRO fans — you can keep only one of these pending free agents for the next two seasons (2021, 2022) at their CURRENT annual salary ... WHO YA GOT?


If Springer were to leave in free agency, this to me would be the first REALLY big sign that the Astros title-contending era is over. The loss of Justin Verlander for 2021 probably functionally ends it, but the possible walkaway of Springer would be the emotional death blow for this Astros nucleus. Jose Altuve is the franchise icon, Alex Bregman is their best player, but George Springer is the heart and soul of the team. If he leaves, a big chunk of the soul of THIS Astros core leaves with him.

So, where could Springer end up going? First, people always bring up the Dodgers and Yankees anytime that big ticket free agents hit the market, but the Dodgers are already going to be spent to the gills on outfielders with the Betts deal and with eventually paying Cody Bellinger. The Yankees will be paying Aaron Judge at some point, and are already paying Giancarlo Stanton ridiculous money.

At first glance, these feel like teams to look out for:

BOSTON
Springer grew up in New Britain, Connecticut, the former home of the Red Sox AA team back in the day, and we know the Sox faithful are probably pretty ornery over being in last place in the AL East. At the right price, Springer could be a key piece for a Red Sox rebuild.

NEW YORK METS
While the Yankees may be out of the mix for Springer, the Mets have new ownership, and could be looking to make a statement in free agency to compete for some New York tabloid real estate. Again, geographically, this would put Springer back near his home state of Connecticut, as well.

CHICAGO CUBS
The Cubs are in first place in the NL Central, but everyone seems to be battling for second place behind the Dodgers as the prime candidate to go to the World Series. What better way to close the gap than to get the guy who won a World Series MVP against the Dodgers in 2017? Drunk Cubs fans would love Springer patrolling the outfield in Wrigley.

TEXAS RANGERS
Oh man, what better way to add some sauce to a division rivalry than to steal the heart and soul of your in-state rival. With the Rangers being, well, not very good, and the Astros possibly reverting closer to a .500 outfit than a 100-win group, that rivalry may need some spice to stay compelling.