Power Outages May Linger Even Once Texas Warms Up, Hidalgo and CenterPoint Warn 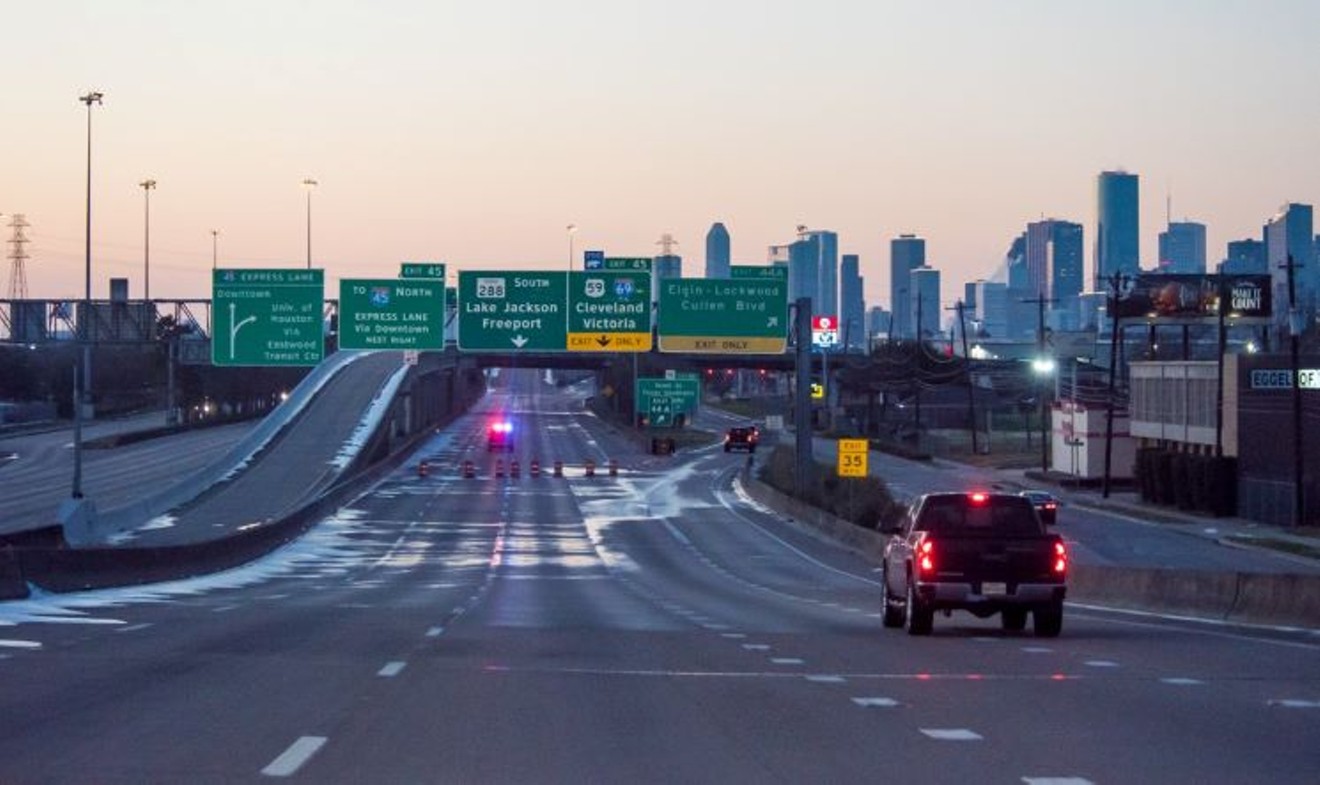 Melting snow and clearer streets won't necessarily mean presto-chango, your power is restored. Photo by Jack Gorman
In a stark warning, Harris County Judge Lina Hidalgo and CenterPoint Energy cautioned area residents Tuesday night that the catastrophic power outages affecting more than a million locals could be with us even longer than the hellaciously cold weather dumped on Texas by an unprecedented winter storm.

“Let me give it to you straight, based on the visibility I have: Whether you have power or not right now, there is a possibility of power outages even beyond the length of this weather,” Hidalgo said.

The reason these outages might last even longer than the cold weather is because even once Texas warms up, it’s still likely that the state’s independent power generators — whom state regulators have relatively little control over thanks to Texas’ largely free-market power system — will still have trouble cooking up enough electricity. It’s a problem affecting all the state’s forms of power generation, including natural gas, coal, nuclear and wind power.

CenterPoint VP Jason Ryan echoed Hidalgo’s warning: “You should plan as if you may have sustained outages until this generation shortfall is over,” he said.

“Let me stress that: it’s not until it gets warmer, it’s until this generation shortfall is over, which could be a number of days,” Ryan continued ominously.

“Let me stress that: it’s not until it gets warmer, it’s until this generation shortfall is over, which could be a number of days.” — CenterPoint VP Jason Ryan

Hidalgo said that there are still 1.2 million CenterPoint customers in the greater Houston area that still don’t have power due to forced outages dictated by ERCOT (the Electric Reliability Council of Texas). That’s roughly the same number of folks that were without electricity on Monday evening, although this new total includes some people who only lost power on Tuesday and doesn’t include a lucky few who regained power.

“We’ve been hit hard by nature this week, but we can’t deny that some of this is a man-made disaster as well, and the five million residents of this county — and really, this region and this state — will deserve answers from ERCOT once this is over,” Hidalgo said. She bluntly criticized the state’s electric grid operator for “being overly optimistic” and for not doing more to prepare for a storm forecasters saw coming with plenty of advance notice.

Ryan once again reminded the public that CenterPoint only delivers the energy provided by the state’s independent power generators, and is legally required to cut power to lessen the load on the state grid when ERCOT deems it necessary. That lack of control over how much power is available and when is the main reason CenterPoint hasn’t been able to provide more clarity about the length of these outages, he explained.

“We may not have perfect information from the power generation companies that provide the power to us to get to you, but we are committed to giving you the information that we do have,” said Ryan.

Hidalgo also stressed the tragic number of carbon monoxide poisonings that have occurred in recent days due to people using unsafe heating sources inside their homes like barbecue grills, gas-powered generators and running vehicles inside closed garages.

Dr. Samuel Prater of Memorial Hermann called it “a public health disaster,” and Harris County Fire Marshal Laurie Christensen begged everyone watching the county’s press conference to warn all of their loved ones of the dangers of using those heat sources indoors.

“We have to get the message out. People are dying,” she said.

There have been around 300 calls within the county about carbon monoxide poisonings in recent days, and at least two county residents have died due to the noxious, invisible gas.

According to county meteorologist Jeff Lindner, Harris County can expect that a “second winter storm” bringing frigid temperatures and ice will most likely hit “starting anywhere between nine and midnight over the area, and then continuing through about nine or 10 o’clock tomorrow morning.” He said forecasters expect the western and northwestern parts of the county to bear the brunt of the oncoming ice buildup, and thinks places north of I-10 will see icier conditions than the rest of the region.

Space City Weather’s Eric Berger wrote in an evening storm update that “Travel in the northern half of Harris County, and points north, could become problematic to rather dangerous late this evening, and should be avoided after about 10 p.m.”

No matter where you are in Harris County, Lindner cautioned that Wednesday morning will bring more cases of slick, dangerous roads.

“Do not get in your car and travel, and stay where you’re at until about mid to late morning when the freezing line moves to the north and the ice begins to melt,” Lindner said.
KEEP THE HOUSTON PRESS FREE... Since we started the Houston Press, it has been defined as the free, independent voice of Houston, and we'd like to keep it that way. With local media under siege, it's more important than ever for us to rally support behind funding our local journalism. You can help by participating in our "I Support" program, allowing us to keep offering readers access to our incisive coverage of local news, food and culture with no paywalls.
Make a one-time donation today for as little as $1.