Houston ISD Superintendent Millard House II touted his district's COVID safety protocols at several campuses Monday. Screenshot
As Houston ISD’s 196,000-plus students headed back to their classrooms Monday with the start of the fall semester beginning, local parents crossed their fingers that the district can avoid widespread COVID-19 outbreaks like those that have befallen other school districts who started in-person classes earlier this month.

HISD’s first day of classes sadly coincided with the number of coronavirus hospitalizations in Harris County hitting an all-time high thanks to the highly transmissible Delta variant. As of Monday afternoon, 2,741 Harris County hospital beds were occupied by confirmed or suspect COVID patients — 631 of them in intensive care unit beds — according to the Southeast Texas Regional Advisory Council.

In less troubling news, the U.S. Food and Drug Administration on Monday finally gave full approval for Pfizer’s COVID-19 vaccine for use in those 16 and older — Moderna (whose vaccine is extremely similar to Pfizer’s) has already applied for full approval and Johnson & Johnson representatives have said the company is planning to submit its one-shot vaccine for full approval in the coming weeks.

The FDA’s full approval of Pfizer’s vaccine appears to create the possibility for further vaccine mandates in Texas, as Gov. Greg Abbott’s previous executive order banning vaccine mandates from government entities, school boards and groups that receive state funding only forbade requiring vaccines “administered under an emergency use authorization.” Given that wording and the fact that Pfizer’s vaccine has now graduated from its emergency use status, school districts and other governmental groups now look to have the green light to issue vaccine mandates for Pfizer shots specifically and other vaccines that eventually get FDA approved, unless Abbott issues another, more broad executive order.

Abbott, who has been fully vaccinated against the coronavirus, was diagnosed with a breakthrough case of COVID-19 last week on Monday; Four days later, he reported that he had tested negative for the disease.

I am now testing negative for Covid.

I am told that my infection was brief & mild because of the vaccination I received.

I will continue to quarantine as recommended by doctors.

And, I will keep working on issues affecting Texas.

God bless you all.
And God bless Texas. pic.twitter.com/VOqpUCONKS


While local public health organizations haven’t been able to give many details about how and when Houstonians will be able to receive coronavirus vaccine booster shots in the months ahead, the state health department confirmed to the Houston Press that once extra shots are available, folks can receive them at any vaccine provider regardless of where they received their first round of shots.

“Just as with second doses, you don’t have to go back to the same provider,” Department of State Health Services spokesman Chris Van Deusen told the Press. While Texans were previously strongly encouraged to get their second vaccine shots at the same place they received their first due to how the state was then making vaccine dose allocation choices, it was never a firm requirement.

“Just as with second doses, you don’t have to go back to the same provider." Chris Van Deusen, Texas Department of State Health Services spokesman on future COVID-19 vaccine booster shots.

Van Deusen shared a message the state health department sent to vaccine providers last week preparing them to administer booster doses, which the U.S. Centers for Disease Control has already authorized for immunocompromised individuals and has recommended for all COVID vaccine recipients eight months out from receiving their last dose starting the week of September 20.

In its letter to providers, DSHS explained that the CDC’s full Advisory Committee on Immunization Practices is set to discuss booster doses on Tuesday. That committee’s vote to approve a formal booster dose policy, as well as an official stamp of approval from the FDA, are both expected to arrive in the days ahead, and further directions from DSHS regarding boo1 sters will come at that time.

A representative from Harris County Public Health told the Press Monday that he and his colleagues would look into its plans and any guidance it had received around booster shots, but did not respond with any additional info prior to publication of this article.

On Friday, HISD reported 157 active COVID cases among its students (67) and staff (90), but as of Monday morning, the district’s public coronavirus dashboard was showing zeroes all across the board for confirmed positive cases among students and staff. HISD spokesperson Dennis Spellman told the Press that was likely due to the dashboard resetting upon the start of the new school year that morning.

He confirmed the previously reported count of 157 active cases was accurate as of Friday, and said the district’s dashboard should be updated throughout Monday as individual campuses started plugging-in their own COVID stats over the course of the day.

Speaking at Parker Elementary in southwest Houston Monday, House said he was intent on enforcing the districtwide mask mandate he issued and which the full school board approved last week, arguing that “If we can save just one life, then it’s worth it.”

Abbott and Texas Attorney General Ken Paxton have been issuing legal challenges to try and strike down a flurry of local court orders that have allowed some counties, including Harris County, to temporarily flout Abbott’s executive orders banning mask mandates. But as of Monday, both Harris County Judge Lina Hidalgo’s county-wide mask mandate issued August 13 and House’s HISD mandate are still in effect.

House reiterated Monday that “Masks are not a choice,” and confirmed that “If we run into a situation where individuals don’t comply with what that mandate is, staff can be, unfortunately, met with discipline.”

But for students who choose to ignore HISD’s mask requirement, “it’s a little bit different,” House said, “where if they don’t comply we’ll be separating from the rest of the population in their classroom [and] asking parents to come get them. If they don’t comply beyond that, they’ll be moved into a temporary virtual status.”

In addition to the virtual option available for willful masking-defiers, House had previously announced Friday that HISD will offer a “virtual academy” specifically for students who are too young to take any of the available COVID-19 vaccines (only vaccines for those 12 and up have been approved for use by the FDA) or who have compromised immune systems that prevent them from safely taking the shots.

Interested families of students 11 and under have until 4 p.m. Wednesday to apply for the virtual academy (instruction begins August 30), which the district will fund with federal COVID-19 relief dollars even though the Texas Legislature hasn’t approved any additional state funding for online learning options this school year.

HISD hopes to avoid the rash of cases breaking out in other nearby school districts that started classes within the past few weeks without mask mandates in place. One such district, Conroe ISD, reported on Monday that a whopping 1,188 students and 173 employees have active cases of COVID-19, and that 1,806 district students are currently isolated due to either testing positive or for showing coronavirus symptoms. 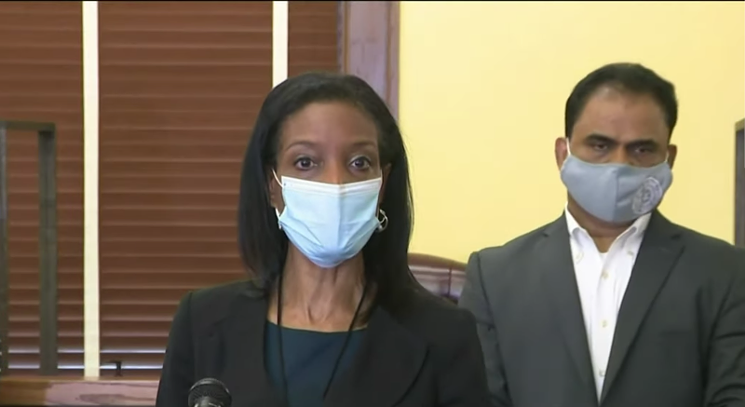 Fort Bend County Judge KP George and county health authority Dr. Jacquelyn Minter have both pushed for masks in schools.
Screenshot
In Fort Bend ISD, there were 558 confirmed cases of COVID-19 among students and 107 among staff as of Monday afternoon. Fort Bend ISD has publicly refused to issue its own mask mandate, even though a local district court on Thursday upheld Fort Bend County Judge KP George’s decision to issue a countywide mask requirement of his own for county facilities and schools, and despite Fort Bend County Health and Human Services Director Dr. Jacquelyn Minter's recommendation that all county schools require masking.

In his remarks Monday morning, House hinted at how politicized the issue of mask requirements in schools has become, but didn’t mention how that’s been primarily driven by many conservatives’ opposition to what they consider government infringement on their individual liberties. That aversion to masking has been egged-on by Abbott (all while he faces multiple challengers in the 2022 Republican primary for governor who claim he’s issued too many restrictive coronavirus orders), but House insisted Monday his decisions on COVID-19 protocols for HISD will be based solely on what the local coronavirus metrics are saying.

“I think there are people on both sides of this conversation or argument,” House said, “but again, the way the data is speaking to us right now it’s reminding us again that this is a public health crisis.”
KEEP THE HOUSTON PRESS FREE... Since we started the Houston Press, it has been defined as the free, independent voice of Houston, and we'd like to keep it that way. With local media under siege, it's more important than ever for us to rally support behind funding our local journalism. You can help by participating in our "I Support" program, allowing us to keep offering readers access to our incisive coverage of local news, food and culture with no paywalls.
Make a one-time donation today for as little as $1.