HISD Cuts Down on its Starts and Stops

Chief Operating Officer Brian Busby explains the new plan to the media.
Photo by Margaret Downing
Starting in the 2018-19 school year, Houston ISD schools will have one of two standardized start and end times, it was announced Wednesday.

There will be some specialty exceptions but nowhere near the 67 different school start times that HISD had allowed to morph into place in its decentralized system that has bused nearly 36,000 students on almost 1,200 routes daily.
click to enlarge 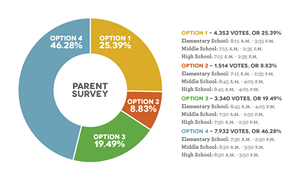 Ah but clearly those every-principal-for-himself days may be numbered.  In past administrations when there have been discussions of school bell times, the conversation was carried out at a school board meeting with trustees weighing in.

Superintendent Richard Carranza's administration deftly cut through all that by conducting a survey of parents and principals in October and then issued its decree today. As Chief Operating Officer Brian Busby explained, this was something that did not require board approval. "School start times is not a board policy."

Busby referred to the results of the survey as "overwhelming," but a quick glance at the district's own chart shows that may be a bit over enthusiastic. Of the four options presented, the winner in the parents' survey received 46.28 percent of the 17,138 votes. That's not even a majority. Although as Busby put it: "It's a majority compared to the other three options."

Among the 154 principals surveyed, 50.97 voted for the now-adopted Option 4, again not exactly a landslide.

Courtesy of HISD
Busby said principals had been responding to the needs of their students in setting up different times over the years.  But now the district has decided to stop that. He spoke of the "synergy" that would be achieved by having all buses drop off elementary students at a certain time and then those same buses could be used an hour later for secondary students.

He said there would be mail-outs, call outs and texts sent to students' homes to let everyone know of the changes. Asked if there would be any leeway at the start of the school year for tardies, Busby said he couldn't speak to that, although he said he thought the only time the district relaxed the on time requirements were for special events such as rain and flooding delays.

So starting in fall of 2018, HISD will no longer be able to lay claim to having the most start times of any public school district in the state.  And high schoolers will have dodged a bullet in Options 1 and 3 that would have required them to show up for school at 7:15 a.m. and 7:45 a.m. respectively.