Come to Texas and you learn a whole lot about the weather. Courtesy HISD TV 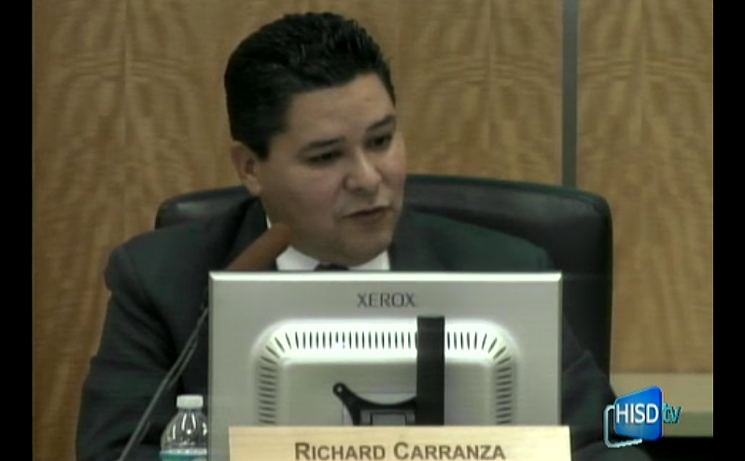 Come to Texas and you learn a whole lot about the weather.
Courtesy HISD TV
In his previous superintendency in California, Houston ISD Superintendent Richard Carranza never had this many weather days to contend with while running a school district.

This school year, between the flooding and destruction from Hurricane Harvey and today's unexpectedly harsh ice storm has put him through a fast course in Texas Education Agency rules of attendance.

Today, but no later than 6 p.m., Carranza said that he will decide whether HISD schools will be open on Wednesday or not. Parents and students will be notified by text and call-outs as well as through the media, he said.

"We have a Region 4 western supes conference call about 4:30. We're going to get the latest updates from Jeff Lindner [meterologist at Harris County Flood Control District] at the county and we'e going to look at what the conditions are looking like, the predictions over the next 12 to 14 hours. And then we'll have enough information to make a decision about tomorrow."

With HISD being as large as it is, and bus transportation routes running across the district, it's generally an all or nothing prospect in terms of keeping schools open he said. "This particular event is affecting the entire city."

Next up, of course will be determining how to make up the lost day or days, something Carranza pointed out that HISD won't be alone in. "I'm anticipating we're going to make up some time but we're not alone. All the surrounding 16 school districts are also in the same boat."

He did say that it is most likely that a day or days will be added to the school year rather than making the school day longer as the district did with some of the schools so damaged by Harvey that they couldn't reopen until weeks after other schools.

An ever-present complication is that high school graduation facilities are booked far in advance, making it very difficult to extend the school year past its initial stopping point. Instead some time will probably be found before the end of the year, he said.