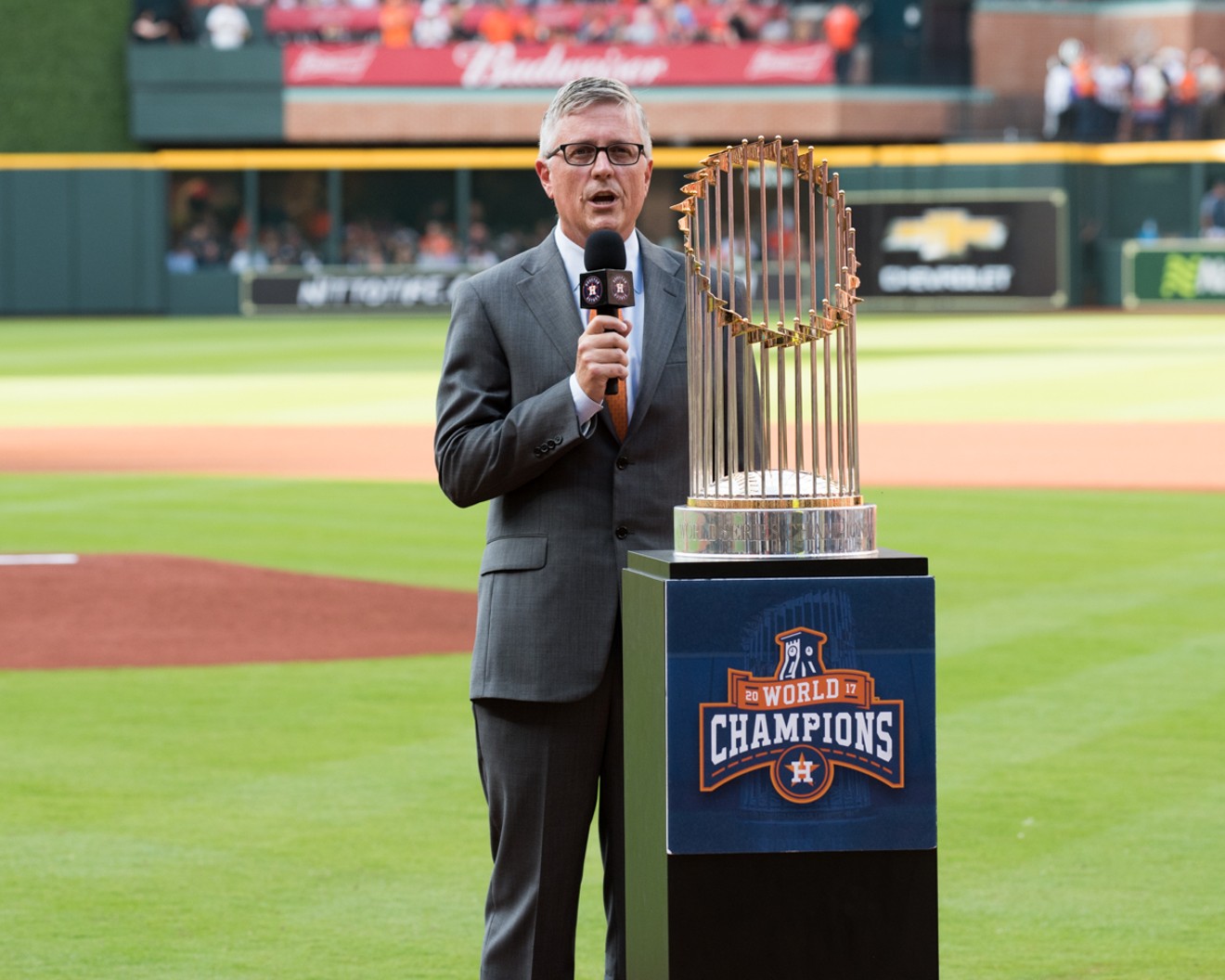 Jeff Luhnow thanks the Astros fans on Opening Day at Minute Maid Park. Photo by Jack Gorman
When we last saw the Houston Astros playing baseball in Minute Maid Park, Derek Fisher was scoring the winning run in the tenth inning of one of the greatest World Series games of al time. It's been a long few months, but there was finally a baseball game played at Minute Maid Park on Monday, a methodical 6-1 win over the Orioles.

That game, though, was mere backdrop to a moment for which the Astros fans have waited for 56 years — the unveiling of a banner in the outfield that contains the words "WORLD CHAMPIONS," the next moment in a series of moments that will culminate tonight with the Astros [;ayers and staff receiving their championship rings before Game 2 against the poo Orioles (who are being forced to watch all of this on their way to what will likely be a 73 win season, or thereabouts).

Let's relive some of the moments, both in-game and pregame, and we actually begin with one that is a minor concern:

5. Carlos Correa's toe issue
I think anybody with a brain knows that the only thing derailing this Astros team from, at the very least, another division crown is injuries. Well, we got our first scare of the season five games in, when Carlos Correa was removed from the win over the Orioles last night early with a sore left big toe. Here is Correa on the injury....


Carlos Correa, who left the game with discomfort in his left big toe, says he's day to day and that X-rays didn't reveal any issues. #Astros pic.twitter.com/WZpK82oxtr

So it doesn't SOUND serious, but typical of the sports gods to only let us enjoy out shiny new World Series banner for like two innings before reverting us to panic again. (Don't look at me like that, sports gods! You know what I'm talking about! Do I need to remind you that you tore Deshaun Watson's ACL the day AFTER the World Series?!?)

4. Charlie Morton caps first swing through rotation
Hey, rest-of-MLB, guess what? The Astros' fifth starter just pitched six innings of shutout baseball last night, striking out six and allowing just three harmless hits. His name is Charlie Morton, and did I mention he is the Astros' FIFTH starter?! In fact, the Astros five starters in their first run through the rotation allowed a total of six runs. You're screwed, rest-of-MLB.

3. Josh Reddick got a hit!
Going back to the beginning of last year's World Series, there's no spinning it — Josh Reddick has been an abject disaster at the plate, and coming into Monday night, he was still looking for his first hit of the 2018 season. But at least he never lost his sense of humor, tweeting this out Monday afternoon before the game:

And sure enough, Reddick got that hit!

Former Astros First Base Coach throws the first pitch on Opening Day at Minute Maid Park.
Photo by Jack Gorman
2. Rich Dauer's first pitch
In one of the more emotional, under the radar stories, former Astros first base coach Rich Dauer returned to throw out the first pitch. If you weren't aware of Dauer's story, here is a brief summary, courtesy of ESPN.com:

Dauer's return to Minute Maid Park was an emotional one, as Dauer — a coach for three seasons with Houston — suffered a subdural hematoma last year and almost died. Dauer, 65, was unaware he was bleeding in his brain after he slipped and fell the night before the Astros' World Series championship parade. He attended the parade before he left and went to the hospital, undergoing a three-hour surgery.

According to multiple reports in the weeks following the parade, Dauer's family was told he had a three percent chance to survive his injuries. It's an incredible story, and a cool moment from Monday:


1. Banner time
And finally, the reveal of the gold banner (to go with all of the new gold jerseys, just $135 at your local sporting goods stores!). It went, um, not so smoothly....


When the #TexasRangers win a World Series, our banner unveiling will go a little more smoothly.

(Astros fans: We get it, you guys have a ring. We don't. New jokes plz.) pic.twitter.com/KGO2IYiKI7

It didn't seem to affect the mood of the crowd, who basically seemed to say "Hell, we waited 56 years... what's another 45 seconds!"

The Astros are back at it tonight against the Orioles, and they will receive their championship rings. Justin Verlander will get the start. Did I mention that you're screwed, rest-of-MLB?