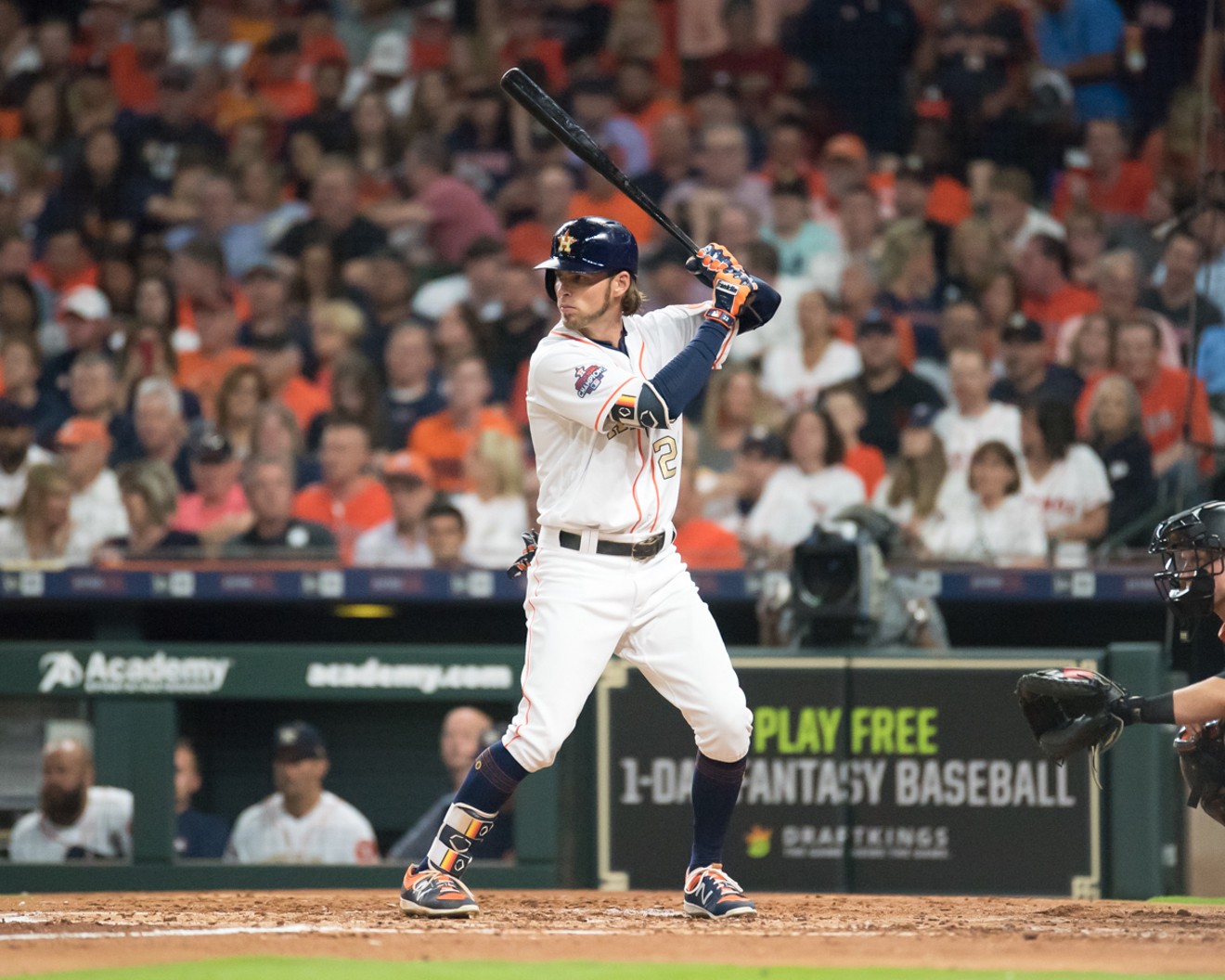 Josh Reddick appears to have put his World Series slump behind him. Photo by Jack Gorman
I've been doing this sports talk radio and writing thing for over a decade now, and I'm four decades into my general sports fandom, so maybe I should have known better before doing a post in which I rated seasonal Astros concerns last Tuesday, 17 games into the season. After all, it is a 162 game season. It's a marathon, not a sprint. (Hey, at least, my cliche game is on point!)

But no, I went ahead, I did the post, and even discussed these perceived early season "holes" in the Astros' roster on my radio show. I went all-in, assigning ratings down to the tenth of a point to express my fear. So what did the Astros do? Well, they went out and ran off a six game winning streak right after the post went up, elevating from 10-7, 3.5 games behind the Los Angeles Angels to 16-7 with those Angels coming to town today to begin a three game series.

In fact, let's start there, with the standings. For a refresher, I'll once again list my four concerns from last week, along with the most relevant line from my analysis and my concern level rating, and we can see how resounding the Astro response was to each of them. Here we go:

4. The Angels
My concern here was that the Angels had already shot out to a three-game lead in early April in a division the Astros were supposed to run away with.

RELEVANT LINE: "That said, it was widely assumed that the Astros could work out any kinks in 2018 with the veil of a large lead in the division to protect them. It appears there might be meaningful division games played in August and September, which will be fun, but anxiety-inducing."

3. Uneven offense
My concern here was not just individual underperformance, but even in games where they actually scored runs, the Astros would do it one big bunch, and go silent the rest of the game.

RELEVANT LINE: Early this season, though, the Astros have had an inordinate number of games where they could get NOTHING going, seven games in all with two runs or fewer, and even in some of the games where they scored some runs, it was all in clusters, like Saturday's game against Texas where they scored all five runs in one inning, and were dead the rest of the time.

2. Keuchel and McCullers
My concern here was that the two starting pitchers on this staff who were actually All-Stars for the team last season had gotten off to slow starts (for them), and McCullers specifically just had the worst outing of his career.

RELEVANT LINE: After just a few starts, Keuchel already has as many losses as he had through the late August last season, although he pitched well in a losing effort last night in Seattle. That was encouraging. McCullers, meanwhile, is coming off the worst start of his career last week, giving up 8 runs in an inning against the Twins.

ASTROS RESPONSE: Keuchel had his best performance of the season Saturday night, giving up one earned run in six innings in a 10-1 win over the White Sox, lowering his ERA to 3.10 in the process. McCullers last two outings have been spectacular and solid, respectively. Last Tuesday, he went seven innings, striking out 11 in a win over Seattle, and yesterday, he pitched really well situationally (he put a bunch of guys on base, but only one made it home) in a win over the White Sox.
CONCERN LEVEL (1 to 10): 5.8
REVISED CONCERN LEVEL (1 to 10): 2.4

1. Bullpen
My concerns here were multiple, but the biggest one was the ripple effect of Ken Giles not seizing the closer's role. Honestly, though, he was not alone in worrisome displays at this point in the season.

RELEVANT LINE: Chris Devenski, another 2017 All-Star, is probably still the most reliable arm, but the bullpen right now needs Giles to reassert himself, or it's going to be A.J. Hinch essentially spinning a wheel in the late innings all season long.

ASTROS RESPONSE: The bullpen had a phenomenal week, and more importantly, Giles had an uneventful week. He appeared twice, and got out unscathed both times, two 1-2-3 innings. By and large, the bullpen was just a series of one inning appearances for guys to get work and eat innings, and aside from a two-run combo platter of suckitude from Tony Sipp and Hector Rondon against the Mariners, the bullpen was lights out, posting a 0.733 WHIP, a 1.20 ERA, and a 16/4 K/BB ratio. It's not exactly October baseball they're playing right now, but those numbers are VERY encouraging.
CONCERN LEVEL (1 to 10): 8.1
REVISED CONCERN LEVEL (1 to 10): 5.6

The moral of the story? Well, I think Justin Verlander pretty much nailed it on Saturday night, responding to rowdy White Sox fans:


Justin Verlander responds to a heckler with a sign saying “No, you suck!!!” (via jacob_qualls3/Instagram) pic.twitter.com/j3JxFfjf41

The moral of the story is that, sometimes, I suck.