Bike Lanes in Houston Are a Joke

A car drives in the designated bike lane along Antoine Drive in northwest Houston. Photo by Jeff Balke
Houston is a car city. It always has been and it likely always will be. The massive size alone in all directions makes planning for and building alternate forms of transportation nearly impossible due to the cost and infrastructure needs. But, for all the complaints you'll hear from pedestrians and cyclists about dealing with dangerous drivers, the city has committed to building a better and more walkable city, if not in the macro, certainly in the micro.

That means wider bicycle lanes, better sidewalks and more off-street hike and bike trails. But that is only in specific spots. As great as the rather substantial and mostly connected hike and bike trails are throughout the city, given the size, the city is woefully lacking in not just space for cyclists, but for maintenance to the existing trails. Case in point: the Heights trail bridge, which was damaged by fired over 500 days ago and is still not operational.

Those sorts of issues force cyclists onto busy streets. In a recent story in local publication The Leader, Abbie Kamin, who represents the Heights on city council said, "The closure isn’t just an inconvenience. It’s a safety issue when residents have to go onto major streets as alternatives.”

Which is exactly why the city needs to immediately begin inventory and consideration of on-street bike lanes in Houston because, with very few exceptions, they are an absolute joke and incredibly dangerous to any cyclist who decides to risk it and ride in them. 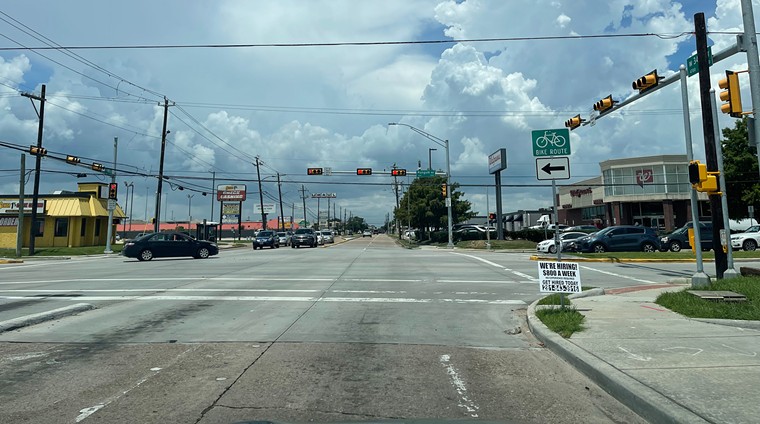 The intersection of 34th and Mangum.
Photo by Jeff Balke
In the above image, the bike lane marker is barely distinguishable from the regular lane markers. In order for cyclists to get to the next segment of the "bike route," they have to turn across busy traffic from the far right lane, which is completely bonkers. 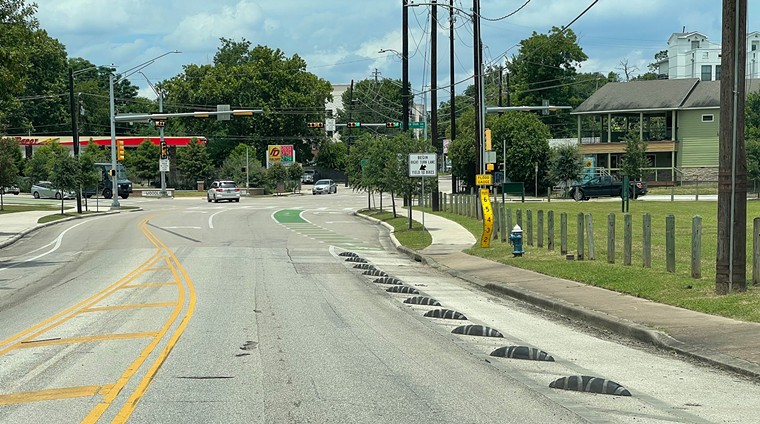 The Houston Avenue bridge heading north towards the Heights.
Photo by Jeff Balke
On the other hand, the excellent signage, color-coded lanes and bumps protecting cyclists is an example of how bike lanes can be done for safety.

It only takes a few minutes of driving down any street with one of those three-foot-wide, barely marked lanes to see just how terrifying it must be for anyone on a bike. Motorists are required by law to provide three feet of distance between their cars and bikes, a law that goes almost entirely unenforced and, in many instances, is nearly impossible given the size of the streets. Even if the street was big enough, take a minute next time you are out and watch how many people cross into the lanes without even thinking.

To make matters worse, these woeful excuses for cycling lanes are often in the worst shape in poorer parts of town where residents likely need them the most. The first photo in this story is on Antoine Drive just a couple miles south of Acres Homes. There are plenty of Houston residents who cannot afford vehicles and walking and biking are how they get to work and the store. And even more who just don't want to drive.  Individuals who are less protected than the cars around them deserve and demand better safety protections.

Frankly, if the city isn't going to maintain the lanes it has, for safety's sake, it should remove them altogether. And, going forward, it should stop simply considering wider sidewalks and bike lanes part of some city beautification program and focus on what they are for many people: transportation arteries.

The very fact that the Houston Parks Board oversees many of the hike and bike trails, despite the good work that they do, says what the city thinks of cyclists. They consider it recreation, not a legitimate form of transportation.

No one outside of the most hardcore cycling enthusiasts would think that bike lanes and trails will be addressed with the same vigor as road repairs given where we live. But there is no question this constitutes a legitimate public safety issue for thousands of Houstonians. When done correctly, they not only add to the quality and beauty of our city, but they keep people safe and take cars off the road.

But when bike lanes are thrown onto streets as an afterthought, they are more dangerous than if they didn't exist in the first place.
KEEP THE HOUSTON PRESS FREE... Since we started the Houston Press, it has been defined as the free, independent voice of Houston, and we'd like to keep it that way. With local media under siege, it's more important than ever for us to rally support behind funding our local journalism. You can help by participating in our "I Support" program, allowing us to keep offering readers access to our incisive coverage of local news, food and culture with no paywalls.
Make a one-time donation today for as little as $1.